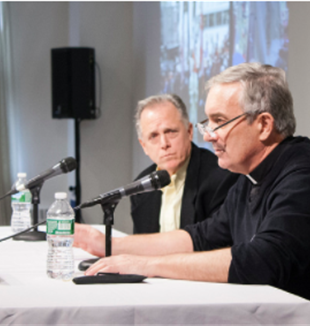 Some of us who were in New York City on September 11, 2001, are not able to revisit that day easily or willingly. Our neighbors and friends who lost husbands, children, livelihoods, and emotional stability weigh heavily on our minds and hearts—they are the ones who really suffer; they are the ones who have the right to continue to weep and mourn. Listening to Father Tom Colucci at the New York Encounter on Saturday, January 14, we could finally admit that none of us remained unchanged by those horrific events, and that we all suffered gravely and continue to struggle with the reality of so much loss. Walking through the events of the day with Tom the firefighter, listeners were holding the strong and patient hand of a minister of peace, faith, and love, for whom the rubble and destruction of human lives did not testify to the absence of God; in fact, it was the real presence of God throughout his life that judged the events. “That day, 343 firemen died and another 540 more guys died of cancers brought on by the air quality, which was full of asbestos. I personally knew about 100 guys who were killed. …Where was Christ that day? He was in the firefighters and rescue workers and the hundreds of people supporting us. God was there, still with us, suffering with us…” This is the reality that allows us to look at that day anew, and this brave and humble priest guided our way.


In his candid address to hundreds of visibly touched listeners at the New York Encounter, Father Tom often paused to collect himself, at times moved by sadness, at times moved by gratitude at God’s merciful proximity. Every few minutes, he repeatedly asserted, “And God was there, too.” “God was guiding me.” “God saw something good in me.” “The reality is that Christ was with us.” “Christ was in the people who turned out for the funerals.” “He was there at the site every day, especially when the cross was found.” Here he refers to the iron cross — made of metal beams twisted in the conflagration — that was found by iron workers on “a momentous day, October 4th, the Feast of St. Francis. Every day from then on, we had 9 am Mass at Ground Zero with that cross, reminding us that God was there with us.” 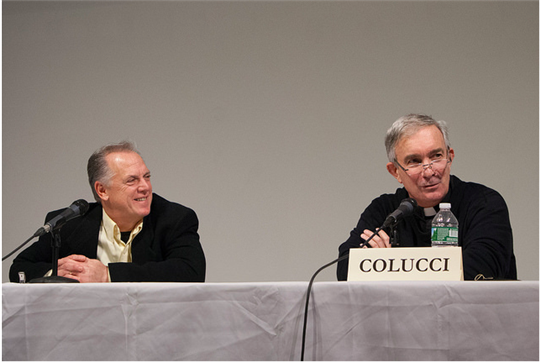 Tom was no stranger to daily Mass or the daily office of prayers, ever since 1976, when he met an influential priest during his college years. The Eucharist and daily office accompanied him through his years as an undergraduate Physical Education major, his master’s program at American University, his years of teaching, and his change of career with the fire department in 1985. Life with the NYFD was enriched by a deep and enduring sense of fraternity, “and these men have remained my true brothers, a brotherhood forever. This is a reality that did not betray me.” Just as he punctuated his talk with reminders of God’s presence and action, he intermittently mentioned all of his ladder company assignments and the men who supported his entrance into the seminary and accompanied him to ordination and beyond: “There were over 1,000 firefighters at my ordination, with a helicopter flyover!” Their support of his vocation was concrete: “The brothers on 19th St. got me an engraved gold chalice I always use.” “The gold vestment in this picture came from my first firehouse in the South Bronx.” “Those guys got me my red vestments…” What might look like a rather confused trip toward diocesan priesthood — phys ed teacher, firefighter, Benedictine monk, and finally, in his mid-50s, a priest in the Archdiocese of New York — was instead one “long and improbable journey of grace” and companionship, according to Father Tom. At the conclusion of his talk, someone shouted, “Give us a blessing, Father Tom!” And so the companionship — and grace — continues.#NewYorkEncounter