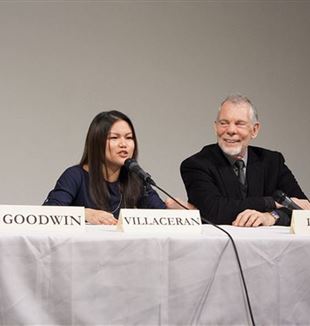 These are the questions that Mila Villaceran, a Family Nurse Practitioner currently working at the Memorial Sloan Kettering Cancer Center, posed to the audience to introduce her section of a talk entitled “Elders as a Resource” at the 2017 New York Encounter. With her on stage to help give some answers during the Sunday morning presentation was her former coworker, Dr. Anthony Lechich, Medical Director of the Terence Cardinal Cooke Health Center (TCC).

Dr. Lechich, who had worked at the nursing home and care facility of the Archdiocese of New York for over 20 years, opened the event speaking about what guided his own path to caring for the elderly. When he was a young man, in 1956, he traveled to Croatia to spend a number of weeks with his father in the village where he had grown up. For Dr. Lechich, watching how his father cared for especially the senior members of the village was like a seed that followed him into his medical career.


By the 1970s, Lechich was working as an intern at Mary Manning Walsh Home. He tells the story of having a special visitor, Cardinal Cooke, who was there to see his aunt. When the Cardinal saw Lechich and his bright shirt, he told him – in Lechich’s words – “I like the color you bring to the elderly. Keep working with the elderly.” Over 50 years later, the then-intern has done that, an in a facility named after the prelate. 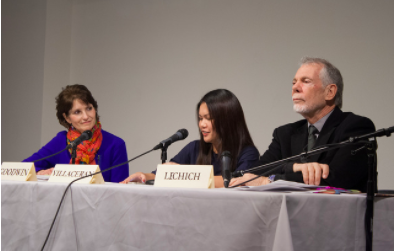 In both of these anecdotes, the seed of his life caring for others was nourished by the example of elders. His encounter with Mila, however, showed he also had something to learn from a younger generation. They met caring for an 89-year-old patient “Peter,” who had such severe injuries for having fallen over a banister, he needed at least three people just to turn him in the bed. Dr. Lechich was impressed by how the young LPN cared for him.

“She’s naturally luminous in her manner,” he said. “She shined that light on her patients.”

That light found one of its brightest moments in Dr. Lechich’s eyes after Peter had returned for rehabilitation from the hospital. He thought the patient was nearing his end, but Mila asked him to come back in about an hour. When he returned, Peter was sitting up in a chair, with his hair neatly combed.

After Dr. Lechich introduced Peter’s story, Mila told the account from her own perspective. She spoke about all the ways she and the certified nursing assistant helped care for him, looking beyond his illness. Like Dr. Lechich, Mila interacted with his family, who she said were happy to see his progress.

“I have received overwhelming gratitude from Peter and his family,” Mila said, “but little do they know that it’s really me who has to express such great gratitude.”

A similar insight on the effect that caring for others has on us was shared by Dr. Lechich, quoting his godson who had interviewed veterans of World War II as an Eagle Scout project. The teen wrote that after having spoken with many of the men, they “stopped being interview subjects, stopped being the ‘other,’ and started being conduits to allow me to receive glimpses into my own life.”#NewYorkEncounter