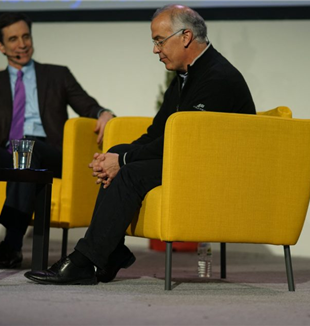 On Sunday afternoon at the New York Encounter, two of America’s top conservative political commentators gathered to discuss the question, “Are the American People Betraying Their Dream? Or Is the American Dream Betraying its People?” The interlocutors were David Brooks, New York Times columnist and author of several books on American culture, and R. R. Reno, theologian and editor of First Things, the leading American opinion journal of religion and public life. The talk was moderated by NY Encounter president, Maurizio Maniscalco.

The conversation was more upbeat than the title of the event might suggest. It began on a personal note when Brooks confessed: “I don’t come here as naturally a spiritual person as the other people on this stage.” Nevertheless, Brooks proved himself adept at describing spiritual experiences. “There are moments when we are overawed, and those [moments] happen regardless of the official culture,” he said after telling a moving, love-at-first-sight story he had heard from his fiancé’s hairdresser. His point was that, no matter how “secularized” our culture might be, reality still pours forth with moments of mystery and transcendence. Brooks also said that it is not just distraction that keeps us from seeing these moments of mystery and transcendence, but also the poverty of the language used to describe them: “abstraction”, he said, is as dangerous as distraction.

Reno often sounded a more cautionary note, a counterpoint to Brooks’ optimism. He pointed out the challenges present in our culture which can come between us and an open relationship with the real. “We are arrested by the reality of things … but the danger or the threat is that we become [too] busy. You have to have your eye open to see things.” He said that the dominant culture offers us three “hearth gods,” and he named them: Health, wealth, and pleasure. These are the things that consumer culture tells us to desire, and to spend our lives trying to obtain and preserve; but living in their pursuit diminishes our lives, because “[the] project-oriented character of these endeavors makes us think about the future and not the present.” Instead, “Worship is the complete antithesis of a project,” and contemplating reality requires living the present moment to the fullest. We should “Help to train people to be present before the things that actually matter” so we can appreciate and enjoy those “the blessing of the given” – the memorable phrase Reno uses to describe those things, like love, family, liturgy, and art, which give life meaning. 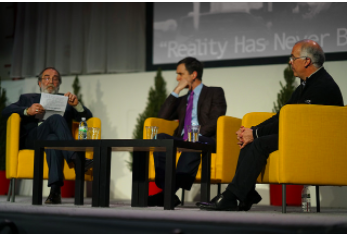 An interesting clash of views surfaced when the topic turned to the nature of the United States of America as a political reality. Reno asserted a more conservative view. He rejected the idea that America is a “propositional nation”, that is, defined primarily by the rights that it affirms and safeguards according to its constitution. Instead, America must be understood in terms of its history and culture, and the common love that its citizens have for the same; he mentioned Abraham Lincoln’s famous appeal to “the mystic chords of memory.” Brooks revealed himself, in spite of his conservative reputation, to be something of a progressive: America might not be a “propositional” nation, he said, but perhaps it is an “eschatological” one, that is, a country that has an ordering ideal of universal equality and justice that it has not yet reached, and perhaps never will attain fully, but which at least orients its progress into the future. Reno returned with an ironic riposte that was perhaps the best line of the night: “Our creedal belief that we [the United States] are the last, best hope for the world is dangerous, but as an American I kind of believe it.”

This line captures the mood of the conversation. Neither Reno nor Brooks were so entrenched in their views that they came off as programmatic or ideological. Both were able to offer fruitful and probing insights while also acknowledging that the American situation is too complex to be summed up in a sixty-minute talk. And yet both men ultimately sounded a hopeful chord for America, despite the “hearth gods” and the threats of distraction and abstraction. The source of this hope seemed to be that, despite everything, both Reno and Brooks agreed with theme of the NY Encounter: reality will not betray us, it is there and pregnant with meaning, and so there is always the possibility that the culture might change for the better.