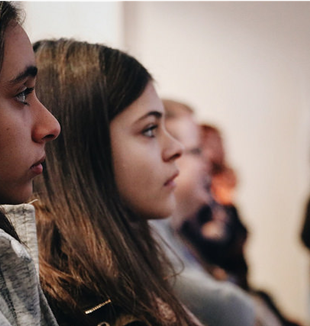 On Saturday afternoon of the New York Encounter, author John Waters and Michael Waldstein, Professor of Theology at Ave Maria University, engaged in a public dialogue to develop the weekend’s theme, Reality Has Never Betrayed Me. Fr. José Medina, US Coordinator of Communion and Liberation, introduced and moderated the discussion.

Fr. Medina opened the discussion with a question. “I want to ask the two of you, when you heard the theme, what came to your mind?” He then asked what the word “reality” meant to each of the speakers. John Waters described reality as a certain and definite path on which he meets “circumstances, gifts, and signs, which are the cues and the clues that take me on the path towards my destiny.” Michael Waldstein recalled two experiences which illustrate for him the meaning of the Encounter’s theme: The first was recognizing a pervasive presence of joy within a Roman church where members of Communion and Liberation gathered for Mass, and the second occurred when he saw the same positivity and joy observing Fr. Luigi Giussani up close during his visits to the United States.

Fr. Medina then contrasted the idea of finding meaning and joy in concrete circumstances with the “millennial” tendency to overlook the present circumstances because of preoccupations over fear of missing out on something else.. Waters responded that a worldview that insists that every aspect of our experience is an “accident” will tend toward disintegrating one’s connection to specific conditions. He then recalled Pope Benedict’s image of the “bunker,” where those inside have “closed out the Mystery and created a space in which man is master… [There they forget] that the Mystery is not just ‘out there’ but also in here,” he said, while pointing to his heart. Referring to Pope Benedict’s development of the bunker theme, Waters said, “the problem with man making himself dissimilar to God is that it also makes him dissimilar to himself. … False reality does betray. But true reality is there all the time, to be found, if we can go back to the source and begin again the journey. Each day we begin again the path and miraculously each day we can find the right path again.”

Both Waters and Waldstein referred to Charles Darwin’s discoveries and theory of evolution. Waters explained that when atheists begin to tell him that Darwin explains human reality, he responds, “I am quite prepared to accept that Charles Darwin explained every single one of you, but he doesn’t explain me! … He may explain biological reality, but he doesn’t explain that [I am] a being with consciousness that looks out on reality and says, ‘What the hell is going on here?’” Waldstein emphasized the importance of having a clear grasp of the culture we live in and of its origins; he described how in the 16th and 17th centuries “a new conception of knowledge came to be where knowledge is ordered to power.” Then Waldstein shared, “Charles Darwin, in one of his letters, said that whenever he sees a peacock’s feather he gets sick to his stomach. Why does he get sick to his stomach? Because it shouldn’t be that beautiful.” Waters chimed in, “It’s unnecessarily beautiful.”

Fr. Medina continued to probe the panelists, asking, “Would it be right to say that the crisis of our time is that we are no longer looking at reality?” Waldstein replied, “We are looking at a reduced reality. We see ourselves as chemical machines,” and Waters quoted St. Gregory of Nazianzus: “Only wonder knows.” Waters then described Luigi Giussani’s thought experiment in The Religious Sense (p. 100), in which he invites the reader to imagine herself as a baby being born now, with full consciousness. Waters noted that “when we start to describe ourselves in the world, we start from a manmade world, and we take for granted our ‘createdness.’”

“You two are basically saying that if I were to embrace reality for what is, in the concreteness of its existence, that I will be led into a path of awe, of gratitude,” said Fr. Medina. “Yet, our tendency, as you were saying Michael, is not to let ourselves go onto this path but to somehow grasp at control over this experience…” Waldstein responded that the experience of the suffering of the human race was a catalyst for those positivist thinkers who first wanted power over nature to improve the human condition, but we can avoid trying to control by recalling two things: first, that “no pain is possible without a prior positive love. All pain is rooted in something positive. At the root of the human heart is the desire for human happiness. Only in that positive context can pain arise, and then pain can lead you [to recognize the need for God].” Second, that in the Scriptures we encounter figures such as the prophet Jeremiah or Job, who both describe a great darkness: “God you have deceived me, duped me…” and “Perish the day I was born.” Waldstein observed that as Christians we can only make sense of these elements in scripture in light of Christ, “only if Christ is experienced as the Redeemer, as the one who overcomes evil at its root. It could be very easy to become hopeless without [Christ].” Waters illustrated this point by describing his own experience in Alcoholics Anonymous: “Actually what was being proposed to me [in AA] was the restoration of the circuitry of my relationship with God, the force that generates me. … The first lesson [you learn in AA] is you are not God.” Then he told a story from his own experience: “This guy says to me, How do you pray? And I answered, Around the house in the morning before I go out.

– Are you on your knees?

– I can’t. My knees won’t bend. He said, Ah, we met guys like you before. We got a solution. Tomorrow morning when you put on your shoes, throw one of your shoes under the bed and when you’re down on your knees to reach for it, say the prayers. Then when I did that, I thought, ‘That’s not too bad.’ I started to feel better. I’ve now restored the circuitry. I’m in harmony with the world, my Creator, and myself.”

Fr. Medina asked a final question: “The correct human position is one of surrender, which is a powerless position. This is a very counter-cultural concept.” What sustains a person on a journey to engage on this level?” Waters answered that the only way a person will begin to surrender is if “you become dissimilar to yourself. When you get to the point when you get so dissimilar to yourself, then you act; you have to act. You have to do something that [seems] deeply unattractive, implausible, [and means] the end of your life as you know it.” After that, Waters explained, you have to “fake it til you make it. If you can’t pray, say the prayers anyway. [AA suggests] only two prayers to start with: Help in the morning and Thanks in the evening. [And each day you have] to get from the help to the thanks. As you put those days one in front of the other, there’s a harmony… I resigned as chief executive of John Waters, Inc. and became the janitor. Now I just show up for work… I know this sounds mad to people who live in the bunker, who have accepted the image of the bunker. Giussani actually talked about the bunker, even though he didn’t use that word: ‘Reason as the measure of all things and thus man as the measure of all things, makes life a prison.’ [This is] great wisdom about reality that everyone deserves to know. It’s a crime against humanity not to let people know about Giussani.”#NewYorkEncounter