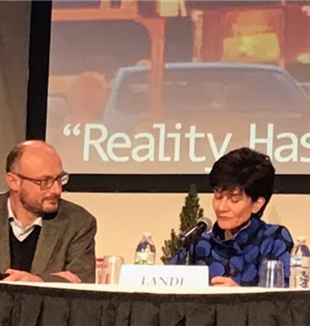 In this Sunday morning conversation, Dr. Polly Matzinger and Luca Matone discussed their work as scientists: What does it mean to be successful in research? What drives their work? Can the work of the scientist be viewed as an art form? “The way you use your reason is beautiful,” said moderator Maria Teresa Landi. “For this reason we called this [talk] ‘The Art of Science’.”

Matone, a researcher in astrophysics and member of the LIGO Scientific Collaboration, explained the process by which he and his colleagues were able to observe gravitational waves, ripples in the very fabric of space-time. Only a cataclysmic event, like the collision of supermassive black holes, can produce these ripples, and their detection confirms Einstein’s now one-hundred-year-old prediction. Matone used data collected by two identical machines (Laser Interferometers) to show that the collision of two black holes bent space-time to the point of creating a gravitational wave, the plotting of which matched perfectly the predictions of general relativity.

Matzinger, a leading immunologist at the National Institute of Health, walked the audience through the troubled history of immune-system models, a history which culminated in her own ground-breaking contribution, the “Danger Model.” The self/non-self model, which teaches that the immune system operates by discriminating between what is “self” and what is “other" and by attacking the latter, was the standard immunological model in Matzinger’s graduate school days. Yet this model could not explain, for instance, why fetuses are not rejected if 50% of their genetic code is foreign, nor why auto-immune reactions target that which under this model is considered “self.” Matzinger proposed an alternative model called the “Danger Model,” which claims that the immune system acts only when it receives “danger signals” from cells undergoing injury, stress, or “bad” (not controlled) cell death. 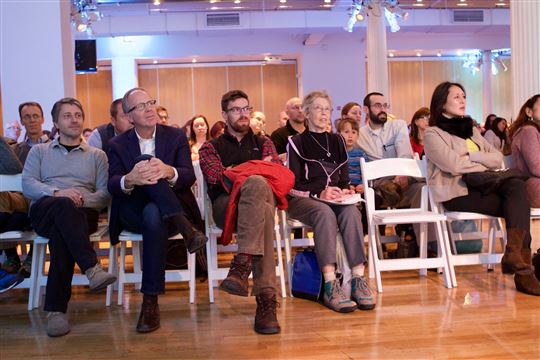 Though they work in widely different fields, Matone and Matzinger share an artistic approach to their craft. As Matzinger put it, “I am not an artist like my sister, but I also paint a picture that tries to represent how nature works.” In other words, science and art are alike in that they share a reliance on reality, a reality that, in its very being, appeals to us. Scientists must be creative as they devise their theories, but in the end theories must confront reality. “You can dream all you want,” said Matone, “but at the end of the day you have to take that dream and compare it to the real. Sometimes you’re attached to your idea very strongly, but you have to compare it.” This is why Dr. Landi said that the way these two scientists use their reason is beautiful: their reasoning is not hard-headedness, but rather an openness to reality.

“But tell me this. If your theories had not been successful, would your time as scientists have been wasted? What is success?” asked Landi. For Matone, it is clear that success in science is not synonymous with the success of his theories. Rather, success is the pleasure he gets when he asks a question of reality, when he faces reality and the problems it poses. The problem, the unanswered question, is a positive thing, so much so that for Matzinger scientists should be in a constant state of mental confusion. This is best, she says, because if you don’t think you have all the answers, you keep asking questions.

The conversation with these scientists offered us a glimpse into the lives of people who, their reason ever open to the real, find their joy in endless questioning. But what is the point of asking at all if behind the answer lies yet another question? To invoke the title of this Encounter, can we say that reality does not betray if our questions before it never end? The unanswered question is a positive thing only if we are looking for an encounter with reality more than the answer itself: “The act of knowledge is not such until it ends in attachment, until we become one with what we have been looking for” read Landi, quoting Luigi Giussani. “Absolutely,” said Matone, and Matzinger nodded emphatically.#NewYorkEncounter