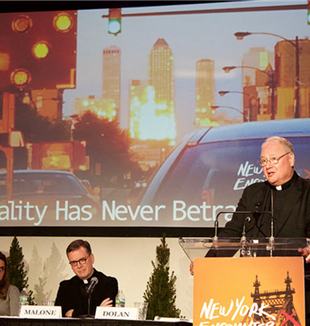 “Being a saint is the vocation of all of us,” reminded Cardinal Dolan, archbishop of New York, who spoke of one of his favorite saints, St. Damien the Leper, also known as St. Damien of Molokai. Damien served in a leper colony in Hawaii before contracting the disease, which eventually led to his death in 1889 at the age of 49. There was nothing dramatically holy or mystical about Damien of Molokai, Dolan reflected. He was just living out his Christian and priestly vocation. Dolan was particularly struck by Damien’s claim that his greatest suffering while having leprosy was his inability to go to confession. Every time a new boat would arrive with supplies for the leper colony, Damien would ask if a priest was on board. If one was, Damien would yell his confession in Latin from a distance, so as to not infect the other priest. 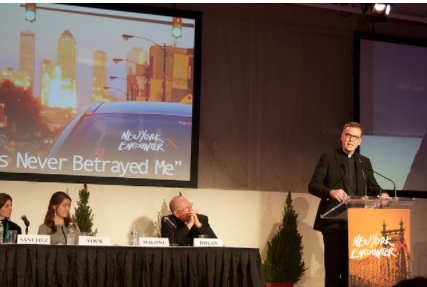 “Saints are for now,” said Cardinal Dolan, recalling not only the proportionally recent death of Damien of Molokai, but also the very recent death of NYPD detective and New York City local celebrity and hero, Steve McDonald, who was scheduled to speak at the New York Encounter this year, but died suddenly this past week. McDonald was shot in the line of duty in 1986 and left paralyzed, but his public statement of forgiveness to the 15-year-old boy who shot him, and his testimony on the boy’s behalf at a parole hearing, made him a public model of forgiveness. McDonald was laid to rest on Friday, after a packed funeral at St. Patrick Cathedral.

"Saints are little more than a love story,” began Fr. Matt Malone, SJ, President and Editor in Chief of America Media, who reflected on the stories of some of his brother Jesuits, three of the North American Martyrs. St. Isaac Jogues, St. Charles Garnier, and St. Jean de Brébeuf left lives of prestige to come to America to evangelize the native peoples. Isaac Jogues suffered great torture at the hands of the natives and returned to France, where he received a dispensation to say Mass from Pope Urban VIII, despite having disfigured hands as a result of the torture. He eventually returned to America, which led to his martyrdom. “They were bringing a gift to others that had been brought to them … The goal of Christianity is not to win an argument, but to be holy,” Malone concluded. 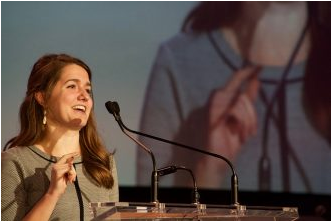 College senior Claire Vouk concluded the discussion, speaking about her experience researching St. Katharine Drexel. Vouk is part of a group of University students who made a commitment at last year’s New York Encounter to research American saints in order to host an exhibit at the Meeting of Rimini in August 2016. Katharine Drexel, who Vouk admitted she did not initially find attractive or relatable, was the heiress to a fortune but felt a call to religious life, intending to be a contemplative. However, at the prompting of Pope Leo XIII during a private audience, Drexel decided instead to give her life to educating the Native Americans and African Americans with the order she founded, the Sisters of the Blessed Sacrament. Reflecting on her experience researching Katharine Drexel, Vouk discovered something had changed for her. What had begun as a glorified history project had become something more. When presenting the exhibit at The Meeting of Rimini, she understood, “We were introducing people to our friends.”
#NewYorkEncounter