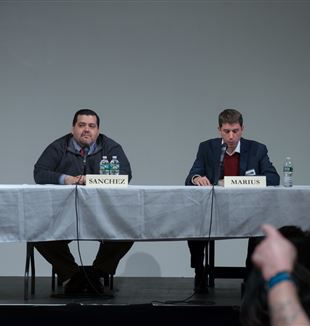 “Venezuela is a rich country with poor people.” For Alejandro Marius, this reality has given birth to a vocation. Marius, who has led the Venezuelan organization Trabajo y Persona (Work and the Person) since he founded it in 2009, spoke about his life’s work on January 14 at the New York Encounter. Marius’ organization seeks to promote the value of work and the dignity of the person in a country in which nearly half of the population is unemployed.

Venezuela is a country rich with natural resources, tropical rainforests, mountains, and above all a beautiful people. “We are a people who live and work with passion,” Marius said, “and we want to see our country live in peace.” But Venezuela has suffered economic and political turmoil for decades. Unemployment reached 44% in 2012 and has worsened since. For those who can find work, wages have not kept up with rapid inflation. Working at minimum wage for a month, a Venezuelan can earn enough to support his family for only a week. People stand in Mafia-controlled lines all day to buy groceries at exorbitant prices. Marius showed a picture of a truck he had bought in 2008. “Last December,” he said, “I bought a battery for the same price that my car cost me.”

In 2007, while he was working for a European company, safe from the economic instability of his home, a Benedictine abbess introduced Marius to the Rule of St. Benedict. “Ora et Labora [pray and work],” he said, “synthesizes the value of the person and his relationship with all of reality. It is as if my eyes were opened for me.” What became clear for him is that work is both necessary and good for man, an integral part of his nature.

“But what do you know how to do?” Mother Christiana asked Marius. He responded that he knows how to work and enjoys doing good work. “Why don’t you teach the people who don’t know how to work?” This question launched Marius on the path of his vocation. Venezuelans have suffered extreme unemployment for years, and have become dependent on assistance from the government in order to meet their basic needs. In this environment, the dignity of work has been forgotten. 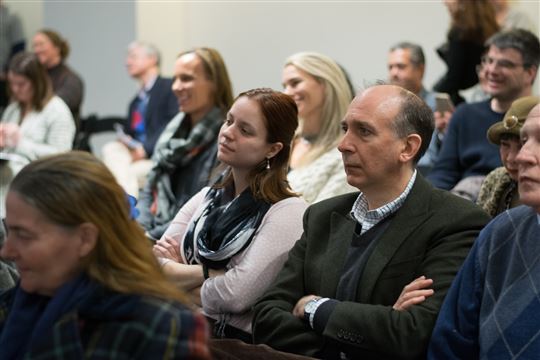 Marius continued to reflect on the words of St. Benedict and on the impact this one man, faced with the collapse of the Roman Empire, had on the world. “I am one man, I cannot save Venezuela,” he said, “but I knew there was something I could do.” Over the next several years, Trabajo y Persona – the Association of Work and the Person – was born. Their mission is to promote the value of work and the dignity of the person. They do this by training people in work and entrepreneurship, and by helping them discover the meaning of the work they do. Many of the people who complete the training go on to start their own companies and employ other Venezuelans.

Since 2009, Trabajo y Persona has grown to over 20 sites across Venezuela, and has trained over 1,400 women and young people to work in industries from cosmology to chocolatiering. Rather than growing to a massive job-training organization, Trabajo has focused on accompanying those who go through their training and enter the job force. Marius shared the story of Edith, a deaf woman who completed the training with the help of a translator and now works as a hairdresser. He also mentioned a young man named Jose who entered the workforce at age 11 and later went through Trabajo’s training to become an auto mechanic. With a loan from the organization, he was able to hire two of his classmates and go into business with them.

For Marius, the work only begins here. “Work is a necessity for every human being,” he said, “It is the possibility to know ourselves and at the same time to collaborate in the construction of a better common home.”