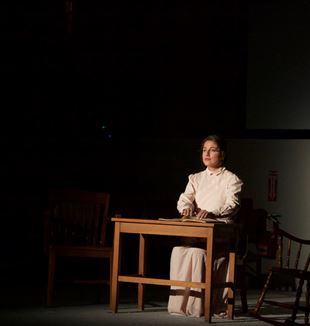 “Shadow and Sound: the Journey of Helen Keller,” a multi-media stage performance written by Emily Green and co-directed by Green and Jo Vetter, played to an enthusiastic audience during the opening night of the 2017 New York Encounter. The inspiration for this production developed from conversations between Green and two friends, Rebecca Cherico and Amy Sapenoff, and featured the talents of actors Mariagustina Fabara Martinez (the adult Helen Keller), Gwynedd Vetter-Drusch (Annie Sullivan), 11 year-old Sophia Curran (young Helen), Tyler Brown and Kristen Carder (Helen’s parents), and Connor Antico and Jude Severson (Helen’s brothers). In addition to the scripted dramatic performance, pianist Brian Billion played pieces by Ludwig van Beethoven during key moments throughout the play; from time to time, various pieces of text from Helen Keller’s writings, as well as video footage of various pastoral scenes, scrolled across large screens on either side of the stage.

In the opening scene, Helen’s parents exclaim, “If only you could see…” and “If only she could hear…,” revealing their inability to accept the reality of their daughter’s disabilities. Their shared dream, that their daughter might see and hear as they do, stands in stark contrast to the reality of Helen’s actual capacity and blocks them from seeing the true possibilities in Helen’s life.

When Annie Sullivan bursts onto the scene, with altogether different expectations for Helen, the young girl first resists and later seems to come alive under her beloved teacher’s curriculum of “obedience and love.” The scenes between Gwynedd Vertter-Drusch (Annie) and Sophia Curran (young Helen) crackled with intensity, and the choreography of their physical battles expresses the initial psychological tension between these two figures, constituting the heart of the performance. 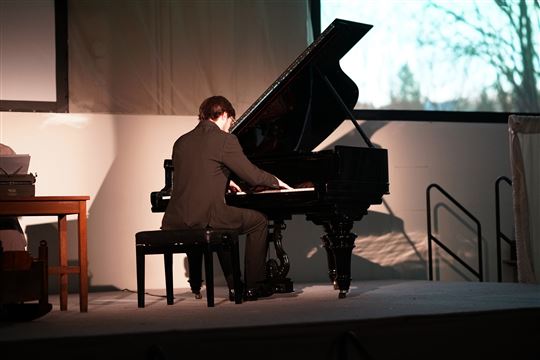 Early in the show, the actors dramatized the moment when Helen’s parents brought her a radio; during the scene, a recording of Beethoven’s Symphony No. 9 in D minor, Op. 125 plays over the sound system, and the text of Helen Keller’s letter to the New York Symphony Orchestra is projected onto screens behind the stage. In her letter, Keller explains that she experienced their performance of Beethoven’s symphony by placing her hand on the inside of her radio’s speaker, and she expresses her gratitude for the beauty of the music, observing, “I could not help remembering that the great composer who poured forth such a flood of sweetness into the world was deaf like myself. I marveled at the power of his quenchless spirit by which out of his pain he wrought such joy for others—and there I sat, feeling with my hand the magnificent symphony which broke like a sea upon the silent shores of his soul and mine.” This connection between Helen Keller and Ludwig van Beethoven inspired the show’s creators to have Brian Billion play various Beethoven pieces between and during different scenes throughout the performance. Billion’s musicality and his deft interpretation of Beethoven’s oeuvre was worthy of a solo concert, given the glory of Beethoven’s music and Billion’s training and talent.

One theme of this performance seems a great lesson for us all: if we set our expectations low, we will never experience abundance or excellence, two hallmarks of Helen Keller’s extraordinary life after she met Annie Sullivan. May we, following Sullivan’s brave example, dare to trust beauty, whether musical, dramatic, or literary, and allow it the space to reach its full potential to generate awe.#NewYorkEncounter