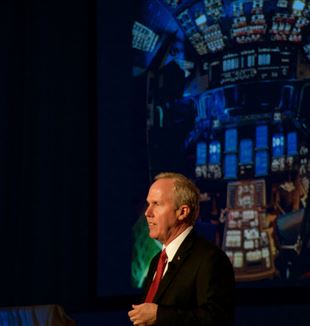 And while with silent, lifting mind I’ve trod/ The high, interspersed sanctity of space/ Put out my hand/ And touched the face of God -John Gillespie Magee

The main auditorium at the Manhattan Pavilion was filled to the brim as the audience gathered to hear Thomas Jones, scientist, author, pilot, and veteran astronaut, speak about his adventures in space. He shared the stage and a dialogue with Lindsay Blakely, a senior editor at Inc. Jones’ desire to travel in space began at a very young age; it all began when his grandmother gave him a book called “Space Flight.” Although the book contained only imagined illustrations of space and what a space station might look like, it sparked Jones’ interest and set in motion a life-long dream of traveling in outer space.

As he grew up, Jones took every measure necessary in order to fulfill his dream of becoming an astronaut. He focused on math and science in high school, graduated from the Air Force Academy, then went back to school to obtain doctorate in planetary sciences. While at graduate school in Arizona, his dreams seemed more tangible than ever when a space shuttle visited Tucson for a refueling stop; however, after Jones completed his doctorate, he began to run into obstacles that looked like they might prevent him from journeying to outer space.

First, doctors were concerned that his allergies would prevent him from being an eligible candidate for space travel. When he eventually got the go-ahead to apply to the space program, Jones was rejected several times. Despite being disappointed by the rejection, Jones put aside his fear, updated his résumé, and applied again. When Blakely asked Jones how he faced these obstacles, he responded, “I really wanted to go to space, and this desire conquered any difficulty that was in my way. Somebody was guiding my path [and] many things I had conceived of as problems ended up being helpful.”

With courage that came from trusting that “Someone,” who was guiding his path, Jones could face the many dangers and difficulties that space travel entails. Jones began his space journey in 1994 on the Endeavor, followed by missions on the Columbia and the Atlantis. Jones spent 53 days in space over all, completing critical tasks such as repairs and the retrieval of a satellite. 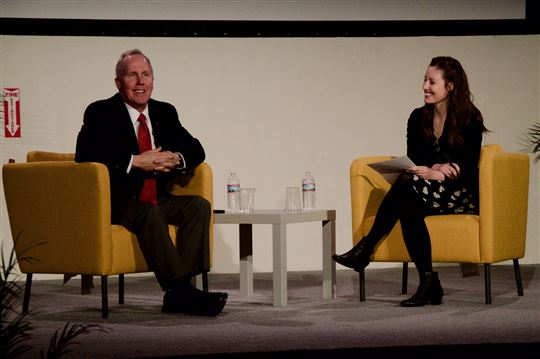 First, Jones spoke about the immense wonder he felt in front of the expansive universe. On one of his missions, Jones asked ground control for permission to go outside the space shuttle to take in the view, “not as a technician, but as a human being.” In this moment, Jones was completely bowled over by the greatness of the universe juxtaposed with his tininess. He shared the lines of John Gillespie Magee (quoted at the beginning) in order to better give words to the experience of “feel[ing] like the veil had been pulled back, the mystery of the cosmos right in front of me.”

In the midst of this wonder, Jones also felt a profound gratitude. In his words, “This was completely a gift from God. Yes, an accomplishment, but also really humbling.” He had a similar experience when he was on his first space mission and was able to watch the sun rise from the shuttle: “When I first looked out, it was all black, but then I saw the sun begin to rise. It’s a brilliant shine of light that hits your eyes. I was thinking, ‘Wow, this is real, I’ve really been given a gift.’”

Towards the end of the dialogue, Blakely brought up the fact that, while he was in space, Jones was extremely close to death: he had only a few layers of space suit or a small number of correctly rationed oxygen tanks to keep him alive. Blakely asked, “Why were you not paralyzed by fear?” Jones replied, simply, “You have to trust. It is a willingness to depend on other people.” In fact, Jones stated that one of the most remarkable elements of his time in space was being with a team of other astronauts: “It is so comforting knowing someone is always right next to you, someone who always has your back and will take care of you.”

Thomas D. Jones is an extremely accomplished man: well-educated, decorated with many medals from NASA, and well-known as a public figure; however, on Saturday afternoon, as Jones spoke, we got to know him as a man just like any one of us: a man who, alone in front of the hugeness of the world, recognizes his need for Another.
#NewYorkEncounter