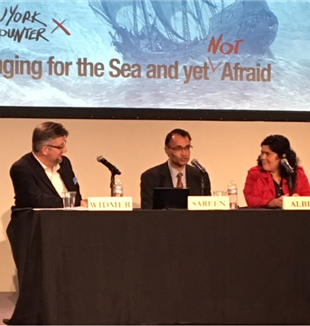 Andreas Widmer is a big man from a small village. Six feet, nine inches tall, from a hamlet of 400 people, he became a Swiss Guard, serving St. Pope John Paul II, and later becoming a world-class entrepreneur. Nancy Albin left a big company, Walt Disney, with a big idea for founding a small organization to employ people with disabilities. They brought their lives, and those of people they have encountered, to a full crowd assembled for their discussion on “Business in Uncharted Waters.”

“I really struggled to find out who I was when I was a young man,” said Widmer. “When you are the youngest of six children, even if all of your older siblings are terrible at something, they are still better than you.” Although he struggled in school, he excelled at the military to prove himself. Andreas joined the Swiss Guards to impress others, not out of faith. Impressing others was not enough. “I was very empty,” he said, looking for happiness in accolades, frustrated by being Swiss in Italy, and experienced a crisis. On Christmas Eve, St. John Paul II found this miserable young man sobbing, alone at his post, and “ministered to me, in a very profound way, not telling me what to do, but in reaching out to me as a human person, telling me that he would pray for me. That was the beginning of the change in my life. Instead of pointing at himself, he pointed to Christ, and by the grace of God I received the gift of faith. I had been thinking I needed to prove myself to someone. John Paul showed me that my dignity doesn’t come from what I do. It comes from who I am.”

Widmer continued to focus on the human person throughout his decades of entrepreneurship and into his current vocation as a professor at The Catholic University of America. “The long-term successful companies are person-centric,” he told the audience and tells his students, adding “what ails us is seeing humanity as a problem, not as a solution.”

Albin began her story at Walt Disney in 2004, where she worked in finance in one of its animation divisions and was happy. The Indian Ocean tsunami and earthquake killed 230,00-280,000 people and shook six countries–and Nancy. “The question of work for me changed. I started asking myself a very important question: What am I doing with my time, my talents, and my education? It was a question full of hope and possibility. I began to understand that what you are doing at your workplace can be so much more than a task or supervisor’s approval.” 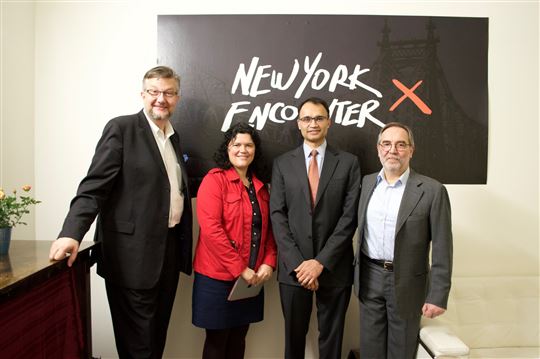 She brought these questions to her colleague and friend, Guido Piccarolo, which “deepened that initial longing and initial attraction of my specific interest and work” and pointed creating a non-profit to offer employment and career opportunities to persons with disabilities.

The year was 2008, a time of financial crisis around the world and in the United States, perhaps the worst since the Great Depression. Nancy and Guido stayed at Disney and developed their business proposal in their free time. Knowing a lot about finance, and little about social services, they asked three experts to review their plan. “Secretly among us, we had decided that if they say, ‘you guys are totally out of your minds, you totally haven’t understood the industry,’ we were going to stop. We did not tell them that. But we said, ‘these are three reasonable people. If they tell us it’s not feasible we’ll keep our jobs.'”

“I was comfortable with dependence, with asking,” Albin noted. “This is one of the most collaborative industries. People gave us their HR [human resources] paperwork. People let us do interviewing to understand the relevant laws and regulations. Those factors allowed it to seem not overwhelming and possible to face the risk. Without the risk, I would not have had the depth in front of reality.” Nancy and Guido co-founded Los Angeles Habitation House in 2008, partially modeling it after an organization in Oregon, continuing to build on the foundation stones laid by others. “I wasn’t asked to do something that I couldn’t do,” said Nancy. “That’s always been an aspect of my faith.”

Albin and Widmer stressed the importance of honoring the freedom and dignity of others. “When we make someone our charity project, we take away their dignity,” said Widmer. “We do not try to fix the problems of our employees,” stressed Nancy. “I’m just as needy as our employees with disabilities. We strive to understand the depth of their needs and enable our employees to be themselves. They have the heart to understand. The heart is not disabled. Perhaps the mind and body. Not the heart.”#NewYorkEncounter