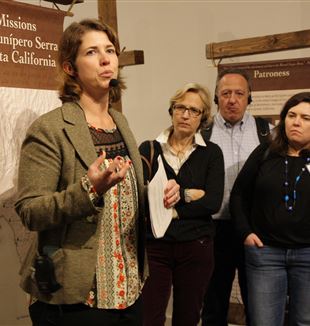 Against this backdrop, a new exhibit that makes sense of Serra, his life and personality debuted at the 2016 New York Encounter. Entitled ¡Siempre Adelante! (“Ever Onward”), the exhibit takes its cue from the phrase that captured Serra’s untiring zest for spreading the gospel. Twenty-one richly illustrated panels draw on some of the latest research on Serra’s life, from his childhood in Spain to his final years in California.

Much of the information comes from the 2015 biography, Junípero Serra: California, Indians, and the Transformation of a Missionary. The authors, leading Serra scholars Dr. Robert Senkewicz and Dr. Rose Marie Beebe of Santa Clara University, were involved in the preparation of the exhibit and contributed images and photographs from their book and personal collections. Their lively presentation on the life and labors of Junípero Serra was a thoughtful, moving, and at times a humorous introduction to the feisty son of St. Francis.

Born 1713 in a small village on the Spanish island of Mallorca, Miguel Serra became a Franciscan at 17 and took the name of Junipero, after one of St. Francis’ close companions. After a successful career as a university professor, his life took an abrupt turn, and in 1749 he sailed to the New World to become a missionary. After almost two decades of teaching and preaching in central Mexico, Serra reached what is today California in 1769, where he inaugurated a chain Catholic missions among the native peoples that eventually stretched over 500 miles–a monument to his tireless devotion.

Organized around the three qualities Pope Francis highlighted in declaring Junípero Serra’s sainthood, the display spotlights his missionary zeal, his personal sanctity and his devotion to the Virgin Mary. Rather than attempt to present Father Serra from his status as an historical figure, the exhibit relies on quotations from letters to his friends, religious superiors, or civil authorities, in order to paint a picture of a man whose struggles and failures, joys and triumphs, resonate with people of today. 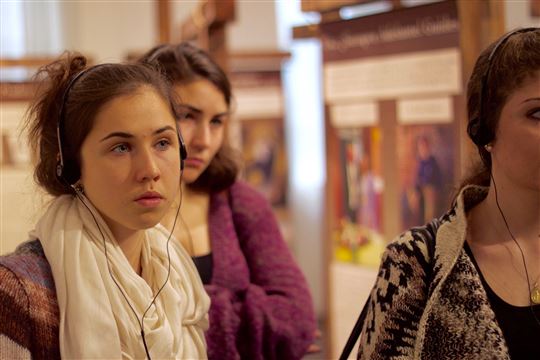 Serra’s words reveal him to be a man of warmth and humility, wounded by the incomprehension and violence of others, but driven by a passion to share his faith with those who had never heard of Christianity. His love for the indigenous people of California, his admiration of the beauty of their cultures, and his efforts to protect them from exploitation by military and civil officials, are featured prominently in the display. The final panels highlight a little-known novena to the Immaculate Conception attributed to Serra, and they offer a glimpse into his affection for Mary, which offered him hope in the face of the many difficulties he faced as he continually journeyed to new adventures.

The exhibit was the labor of love of several friends on both sides of the country who were moved to learn more about Serra’s life and contributions and share their interest with others. In addition to the support of Professors Beebe and Senkewicz, Serra scholar and archaeologist Rubén Mendoza provided stunning photographs to help visualize the places that marked the new saint’s life and deeds.

What might Junípero Serra say to those who sincerely seek to interpret his legacy today? Most likely he would use the same words he wrote to his parents as he made ready to sail to the Americas in 1749: “I wish I could instill in them the great joy that I am experiencing because I believe they would urge me to go forth and never turn back.”#NewYorkEncounter