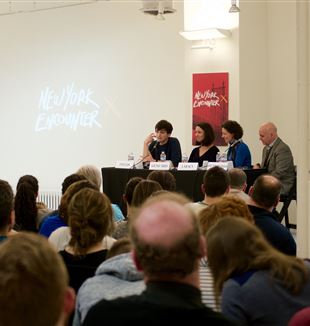 “When we go to a movie theater, we bring our history with us; we bring a lot of experience with us. Whether or not we realize it, we’re being moved and affected by what we see,” said Sal Petrosino, Director of the Film, Video and Animation Department at New York City’s School of Visual Arts. Petrosino added that a person can speak authoritatively about a film, even if he or she is not an expert in technical aspects; the authority to speak critically about a film is possible for anyone who is aware of his or her human experience. Audience members could verify this statement through listening to the varied panel that gathered to speak about Pixar’s recent hit, “Inside Out.”

The discussion did not center around an analysis offered by Petrosino, the resident film expert who moderated the event, but rather the main contributors were a college student named Peter Fields; Margaret Laracy, a clinical psychologist; and an actress and mother named Naomi Genuard. One of the most insightful questions of the evening came from an audience member barely tall enough to be seen over the heads of the crowd. All of these speakers unpacked different angles of the movie’s theme, that of growing up and learning about the inseparability of joy and sadness.

Peter Fields, a freshman at City College of New York, spoke first. He spoke about a scene, in which the film’s main character, Riley, attends her first day at a new school, and discussed the scene’s direct connection to his experience. Though Riley does her best to remain positive, the nostalgia for her former home overwhelms her, and viewers then see the conflict between the personified emotions Joy and Sadness, who reside in “headquarters.” Fields spoke of his own experience, which included a moment when it seemed the simple, youthful “joy can no longer be,” and, like Riley, he didn’t “want to be sad. What’s left is just to shut down.” In fact, at that instant in the film, an accident at headquarters leads to Riley losing track of certain core parts of her personality. We could say that she loses herself. Fields contrasted this loss of self with a phrase from Fr. Luigi Giussani in which he says, “[The] logical opposite of sadness is despair.” Though our first response to sadness is often to try to push it aside, as Joy does, as came out later in the panel, we can understand sadness as a gift, which is given to us to lead us somewhere and to help us discover our desire for something great.

In the clip chosen by psychologist Margaret Laracy, the audience saw one of the turning points in the film. As Joy reviews an old memory, which Sadness remembers differently, Joy is finally able to broaden her view and recognize that two emotions can coexist and even enhance each other. Laracy pointed out that the character of Joy is ironically anxious, as she perpetually tries to censor anything that could take away from Riley’s happiness. Instead, precisely in a moment of suffering and crisis, Joy’s defenses are down and, in Laracy’s words, “She becomes open to another aspect of Riley’s experience.” 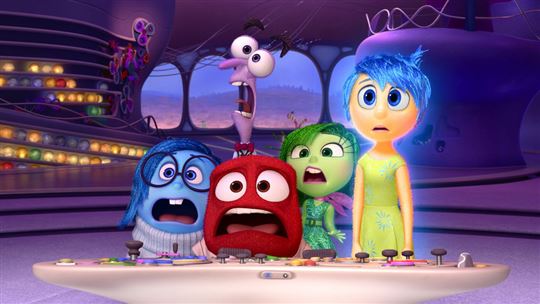 The film comes to a conclusion within the context of Riley’s family, which is also its starting point. Naomi Genuard, an actress and a mother, chose to speak about the same scene that Laracy chose because of how it depicts the role of community in facing sadness. It’s late at night, and Riley’s parents have been anxiously looking for her. Suddenly, she walks in the door and the mother and father embrace her as she expresses all the sadness she’s been holding inside. Genuard observes that the parents don’t “try to fix her, but they themselves think, ‘I don’t have the answer either.’ And in that embrace, she’s generated.” Within the sad memories of the home she misses, Riley can be happy, and the part of her personality formed and nurtured by family comes alive again; from there, her entire personality reawakens.

When Genuard finished her remarks, Petrosino opened up the discussion for questions from the audience. The room was silent and, just as the moderator was about to speak again, a boy about 10 years old popped out of his chair and came to the microphone; a warm round of applause greeted thim there. He pointed out that members of the panel had spoken only about Sadness changing Joy, but that he saw Sadness was also changed by Joy because by the end of the movie, Sadness begins to take herself more seriously. Petrosino responded first and explained that the youngest contributor’s insight helped to reveal what the filmmaker wanted all his viewers to consider: that sadness has a value, even though our reflexive reaction is to think of it as a bad thing. Sadness teaches us to continue to long for something and brings us into a unity with others, who can help us to take ourselves seriously and not censor any part of our experience.#NewYorkEncounter