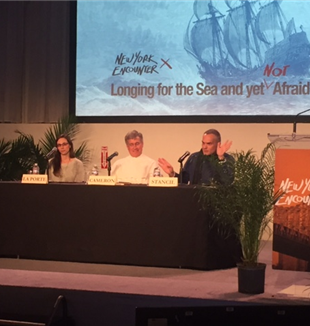 Fr. Peter Cameron, OP, Editor-in Chief of Magnificat magazine, made an observation to the audience of 1,000 sitting in silent astonishment after initial presentations at the “Crossing to the Other Shore” event: “There is something very odd about this presentation. We have a former inmate, Joshua Stancil, and Priscilla La Porte, someone who was involuntarily plunged into a victim’s grief; but the antidote to both of their suffering is the same.”

Indeed, the surprise of this connection caught all present off guard, as most authentic judgments do when they communicate the truth.

Joshua Stancil, a man incarcerated for a crime that received the maximum sentence of 18 years, began by speaking of his raw experiences as an inmate. Next, Priscilla La Porte, a high school guidance counselor, described the events of the day her brother Matthew J. La Porte, at Virginia Tech on an air force scholarship, was killed in an act of heroism during the shootings on April 6, 2007.

Time, both our time and God’s time, in both their stories, surfaced as a key focus, in statements such as: “At this time I received a phone call…”; “On this day I said this prayer…”; “On this feast day this happened…”; “After this month I received this grace…” The most impressive reference to time surfaced in their unequivocal, certain, and joyful agreement that God is in all time, in every circumstance, present and everywhere. They expressed their certainty that God is always with us and for us. Considering that it took Priscilla 8 years to emerge from a terrible, dark place, and Joshua perhaps longer, their witness to the luminous value of suffering—what Fr. Peter called “the inviolable authenticity brought by suffering”—powerfully attests to the fact that suffering that is accompanied, faced, has eternal value.

At the outset of his talk, with characteristic humility, Stancil warned, “Prepare to be underwhelmed!” He expressed his gratitude for the gift of true freedom—a gift that he acknowledged was realized long before he left prison—and which seems to be with him every minute, even when getting ready for bed, as he observed with his hotel roommate, who has also recently been released from prison. Joshua’s roommate marveled over the fact that they once shared a cell and today they share a hotel room in New York City, witness at the New York Encounter to the incredible event of God’s love for them. 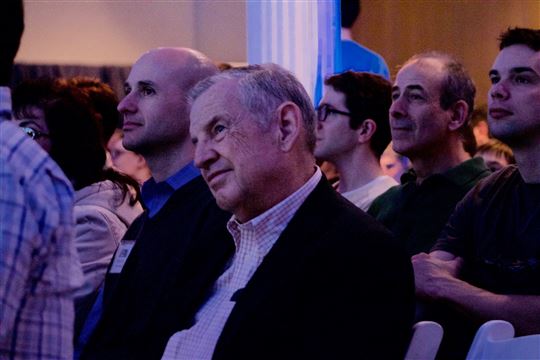 Joshua recounted that when he first entered prison, his lawyer thought there was a chance that his sentence would be reduced to five years; however, this reduction did not take place, and he received a sentence of 18 years. At the beginning of his incarceration, he found himself gravitating toward the writings of Fr. Luigi Giussani in Magnificat magazine, so he sought, with little luck at first, to contact anyone who might know more about the priest and his work. In 2002, after six years in prison that were marked by despair and thoughts of suicide, he made a prayer of consecration to Mary on the Feast of the Assumption. Within a few weeks, he unexpectedly received some e-mail addresses of people who lived in Maryland and were in the Communion and Liberation movement, and he began, over subsequent months, to receive surprising and seemingly random correspondences (to which he reluctantly responded because his Southern upbringing taught him a sense of protocol, which required he do so!). He relates, “My life began to change when Elisabetta and Tobias drove seven hours to come visit me. They were my first visitors from CL. More people came, every month, and eventually every week, to visit me.” He became resistant, due to his own feelings of being unworthy of such friendship, as well as to his ingrained suspicion that this solicitous interest would eventually end and therefore should not be dragged out.

“But I said nothing. And they didn’t leave me alone.” Slowly, he realized that he could be forgiven and that the biggest obstacle to forgiveness was his difficulty in forgiving himself. Rick Kushner, the first person he had written to when trying to learn more about CL, asked him to be the godfather of his daughter. He also received a letter from Fr. Giussani. “Fr. Giussani in his letter referenced ‘our’ faith — he wanted to associate himself with me. We shared this experience of faith. And further, when a couple asks you to be godfather to their precious child, you can be certain mercy exists!” As he became familiar with that mercy, he observed that it always preceded repentance; to support this claim, he cited Romano Guardini: “Justice regulates, orders existence; mercy creates.” His life, in all its culpability and misery, transformed to reflect something of the glory of God. He also said that this transformation happened in God’s time, “Without the 18-year sentence I served, my life would be so much poorer today.”

Priscilla La Porte described her life, which was, by appearances, in stark contrast to Joshua’s: “I used to think being a Christian was being good and being rewarded by God for it. I was happy.” When her brother died, she was a senior in high school, making plans for the future, getting ready for prom… “When I saw the news of the shootings, I did not even wonder if Matt was okay. Those kinds of things would never happen to us. Much later on in the day [when neither she nor her parents had been able to contact her brother], I was in the car, screaming at God, ‘Don’t let me find out that something happened to my brother!'” When she found out the grim truth, those in her family could not even help each other because, she said, “We were all just too broken. Matt wasn’t around anymore, and I felt like God wasn’t around anymore, either. He had let this happen, and it was too painful to approach Him.”

Eventually, she began to say the rosary because, she explained, “It was the only time I felt a drop of hope”; she prayed that some day in the future she would have a permanent hope in life again. Through this fidelity, narrated La Porte, “Mary showed me her heart. She helped me to see Jesus through her eyes. She showed me that He was always there, working behind the scenes.” On April 9, 2015, Matthew Joseph La Porte received the Airman’s Medal, the highest honor that the Air Force confers on a non-combatant. Priscilla joined her family to receive the medal on behalf of her brother. That day, Priscilla was overwhelmed by joy, and she realized how her life had not only been given back to her, but it had been transformed and expanded to unimaginable dimensions. She said, “I felt the sun and the light breeze on my face, and I was surrounded by so many who loved us and my brother. It was a foretaste of heaven.” Despite, or because of, the eight years of suffering La Porte could say, “God’s timing is perfect. We have to trust always that He does things for a reason. He gives us the resurrection!”

When asked by Fr. Peter what she could say to the hundreds of young people gathered at the New York Encounter, Priscilla did not hesitate but said, “They need to know that whatever they are facing, whatever they are going through, they can get to the place that God has led me to.” Both Priscilla La Porte and Joshua Stancil have committed their lives to sharing the news of this Love that they discovered along their “mysterious” path of suffering.#NewYorkEncounter