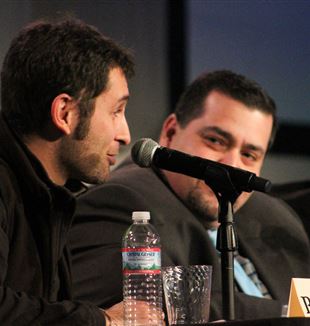 On the afternoon of January 17, Giulio Piscitelli, an Italian photographer now famous for his eyewitness photo accounts of immigrant news in a dozen countries across the globe, and Msgr. Ronald Marino, Vicar for Migrant and Ethnic Apostolates of the Diocese of Brooklyn, opened the dramatic topic of immigration at the New York Encounter. Each of them began his journey to accompany the personal lives of immigrants with an attitude of ingenuous obedience, which led them to undergo profound personal and professional transformations. Marino said that “powerful experiences that you cannot ignore” catalyzed these changes.

Piscitelli’s experience with immigrants began when his photography professor suggested he take on the topic of the immigration crisis that has been building for years in Europe and Italy. His subsequent reportage from Libya to Italy, during a trip full of risk, not only launched his career, but it offered the opportunity to see “for the first time the humanity of people who were trying to help themselves.” He went on to explore and reveal the drama of the immigrant problem, not only in Italy, but in Macedonia, Syria, Ukraine, and other places marked by tragedy and loss. All displaced persons, he asserted, speak about hope. This hope could be for a new home, for a future for their children, for the possibility of living with dignity; Piscitelli concluded, with authority, “Hope is at the root of all migrations; it is the biggest motivator. And this is true for us, too.” He knew that his experience was transforming him personally when he noticed, “I began to look at all topics differently,” with greater attention to the humanity of each person, to the point that he realized he must critique what he was seeing, including the current fear that would treat all Muslims as terrorists. “I hope, with all the rest of them [the refugees and immigrants] who are continuing to hope to find their path, that society will open its eyes and change, to view the new cultures, of those who are arriving, in a better way.” Without this change, he said that he fears that our own society “will necessarily die.”

Lest those present might forget that they, too, descended from immigrants, moderator Stephen Sanchez presented a video on American immigration. This underscored the personal level revealed in Piscitelli’s poignant photo documentation, accompanied by background voices that told of their experience: “I prayed that the ship we were on would go down… all you got was tears… I will never forget the joy of setting foot on this land…” 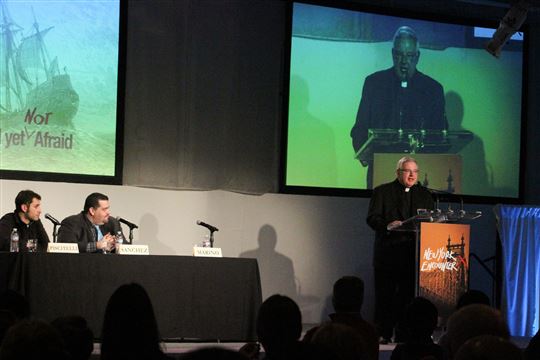 In response to seeing Piscitelli’s presentation, Msgr. Marino insisted, “These are powerful images that have to change you… Anyone with a Christian heart is moved to help… [But] we immediately are overtaken by fear of inadequacy.” He explained that he, too, faced the same limitation when he first began as Episcopal Vicar for Migrant and Ethnic Apostolates of the Diocese of Brooklyn, with responsibility for the first Catholic immigration office in the United States. He explained that he began “out of obedience” because his bishop had asked him, even though at first he could only focus on his lack of qualifications for facing the needs of immigrants from China, Korea, Haiti, Poland, and other places. Over time, however, he eventually came to recognize clearly that this new responsibility had set him on a privileged path that had been laid out by Christ, for Marino’s own conversion.

During the beginning of his role as Vicar for Migrant and Ethnic Apostolates, he initiated “a parade of projects” for immigrants, including language proficiency classes, legal counsel, job training, and more; yet he still found himself asking, “Where is Christ?” He said that he had “discovered great organizational talents, but no ‘me’.” Then one day, the embrace of a solitary, bereft immigrant, whom he had met briefly in Rome, resolved this conflict for him; in that simple gesture, Marino said, “I finally saw the human face of Christ.” He then realized, with greater clarity, that his value resided, not in what he did, but in who he was in the eyes of the Lord; that evangelization involves listening, rather than talking; and that immigration is a moral issue, rather than a political one. The migrant brought him a personal gift, that of catalyzing personal change; and this was the same gift that immigrants had given to Piscitelli. Migrants, explained Marino, “are people in the process of finding meaning in their lives;” and then he told us that we are fortunate to have them on our path, despite the inner struggle they provoke in him: “My own heart aches when I see hundreds of thousands of displaced persons, but I rejoice in knowing of those waiting to welcome them.” He also pointed out that those who do welcome them by “making room in their hearts before everything else,” will know the same miracle of change he and Giulio Piscitelli had experienced.

These two men invite all of us to add our voices, just as they have, to the many who have recited and given flesh to Emma Lazarus’ poem engraved on a tablet within the pedestal of the Statue of Liberty on Ellis Island: “Give me your tired, your poor,/ Your huddled masses yearning to breathe free…”#NewYorkEncounter