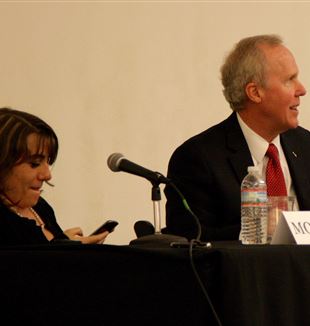 When the Soviet Union embarked upon the world’s very first space journey in 1957, life as the world knew it changed forever. “The ends of the earth” was no longer a terminal phrase; we could go beyond. The mystery of space has piqued human curiosity since the times of Aristotle and Galileo, and our knowledge and curiosity are constantly increasing. On Saturday evening at the New York Encounter, the exhibit titled, “Explorers: A Journey to the Edge of the Solar System and Beyond,” satisfies this curiosity, which seems innate to human beings. In the afternoon, the organizers of the exhibit hosted a presentation, which attracted people from various professions, both from within the sciences and without.

Speaker Dr. Maria Elena Monzani works as an astrophysicist at the Stanford Linear Accelerator Center (SLAC) in Menlo Park, CA and as a professor at Stanford University. Tom Jones is an American astronaut who has been on four missions to space. The evening began with Monzani, who gave an introductory address as an overview of the exhibit, which received great inspiration from Pope Francis’ address on November 29, 2013. In that address, the Pope said, “Reality is understood only when it is looked at from the periphery and not when our viewpoint is equidistant from everything.” Monzani asked what it could mean to look at reality from the periphery. We as human beings have always been explorers. Monzani spoke about the Bering land bridge, over which humans originally came to America, from Siberia. Monzani also pointed out the interesting fact that there was never a land bridge to Australia, but that explorers were willing to sail into the unknown, using only the position of the stars to navigate. “We don’t explore just to find, but to be found,” observed Monzani, who then left the audience with one poignant fact: that the word “desire” comes from the Latin de-sidera “from the stars.”

After the introduction and overview of the exhibit, the organizers opened the floor to questions. One question, to Jones, was: “What kept [you] secure in [your] quest for space?” He responded that he was blessed to have encouraging parents and teachers and that his Catholic upbringing in Baltimore provided a strong foundation for his desire. “I could only go so far [with] my own talents. I knew I’d need some extra help, and [my Catholic upbringing] made me know it was OK to ask for it,” he added. “On the Launchpad, waiting for the countdown, there is time to wait…” yet, he “never felt like [he] was alone out there.”

One audience member asked about Jones’ thoughts concerning human colonization of other places in our solar system. Jones said that his time developing the Destiny lab space station gave him firsthand experience of the possibility that human beings could dwell somewhere besides earth. “Eventually we are going to have to cut loose from earth,” he said. “We have had a continuous presence of humans off the earth for the past fifteen years.” 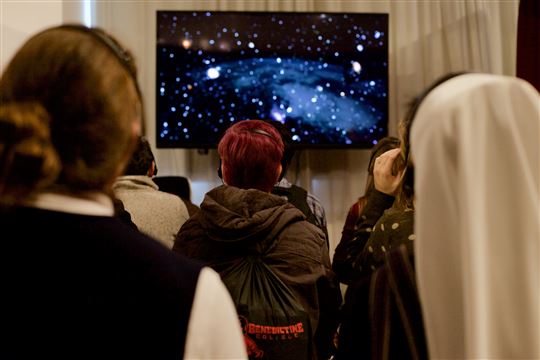 Two questions concern the theme of space as Hollywood films portray it. Tom Jones’ favorite space movies, which he said depicted space well, are the 2014 film, Gravity, with actors George Clooney and Sandra Bullock, and the 2015 film The Martian, starring Matt Damon. He added that the best space entertainment comes in Imax movies, especially 3D showings. Then someone asked whether Jones and Monzani liked Star Wars Episode 7. “I liked the new characters,” Jones said, but he also expressed that he was “a little bummed” about some of the plot developments.

In answer to the question about whether he was able to find anything new about humanity or about himself through his experience as an astronaut, Jones said, “I was a tiny footnote in our entire history… You make your little contribution. Whatever you do is some little advance.” Then he kidded the audience by observing that we the perfect age to pioneer the colonization of another world, but added, “Eventually we will have a permanent presence on Mars.”

Monzani then responded, “We think maybe there is life [on other planets]. [But] we do not know if there is intelligence out there.”

We explore both to find to be found, as Monzani had remarked in her introduction. This thirst, which gives rise to curiosity, helps deepen our sense that space exploration, as a discipline and as an activity, fills us with wonder. Throughout this conversation, we understood that our fascination with space eventually brings us to the realization of how very small we are. This understanding of our littleness, though, rather that creating an obstacle to our desire, increases our longing: our hunger is constant.