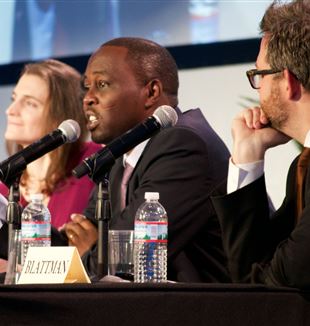 Three billion people live on less than $2 per week, in what is defined to be extreme poverty. When we shift the threshold up to an income of $2.50 a day, the people who live in poverty includes one half of the population; meanwhile, at least 80% of humanity lives on less than $10 a day. Paolo Carrozza, Director of the Kellogg Institute for International Studies at Notre Dame University, offered these facts during his introductory remarks for a panel discussion titled, “The Quest to Reduce Extreme Poverty” in the world. He introduced the three other professionals, each involved in different ways with the work of development, and then he launched a challenge to them that was almost as daunting as solving the problem of poverty: he asked them to reveal what has given them the energy and positivity needed to dedicate their life’s work to such a task.

Chris Blattman, a professor of Political Science at Columbia University and researcher for entities including J-PAL and Innovations for Poverty Action, spoke about finding his passion for helping others in a very human way, for “the noblest of reasons: [he] followed a woman.” As an historian, he traveled to Kitgum, Uganda, near the end of the 20 years’ war. His friend was working with AVSI Uganda in programs to help children and families recover from the effects of war. In his words, “her passion became my passion.” The experience led to a career that involved designing evaluations to better understand what works to help people to improve their lives; this research requires that those involved in the field of international development become more introspective, rather than assuming their methods are effective.

Blattman described an AVSI program that gave cash to women who live in extreme poverty in Northern Uganda. AVSI put fewer constraints and imposed much less oversight than such programs typically involve. The program was successful. Blattman said approaches like this, “may require a great deal of humility. We have to be willing to put our trust in people.” 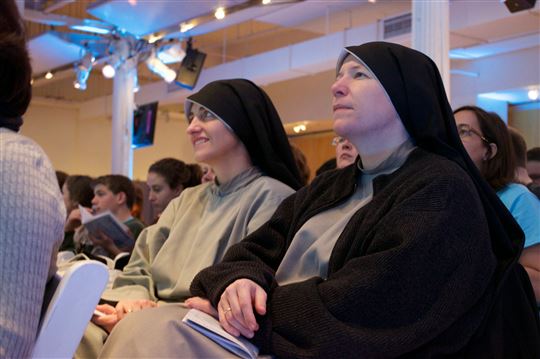 Another perspective from the African continent came from Joakim Koech, a native of Kenya and principal of Cardinal Maurice Otunga high school in Nairobi. He began with his own story, by explaining: “I’d trained as a teacher, but after college, I didn’t want to teach because I thought it was too little. I wanted to be rich.” The audience responded with a burst of laughter. Then one day, while walking along the road, he ran into the principal of the high school he’d attended. His former principal was desperate to find a Swahili teacher, so he Koech said, “I told him, ‘Maybe in the morning when I’m free’ but this is what happened: I went there for two hours and now I’m here!” He described being a very stern and strict teacher before he met a group of friends, who were also educators and who invited him to get together to read a book by Luigi Giussani, The Risk of Education. At that time, he had begun to work at a new, Catholic school, which was very beautiful but which had very dirty bathrooms, and this situation provoked him to ask questions, including: “Is it possible to find a place where we can look at our students in a different way?” He explained that the new school, Cardinal Otunga, was born from this question. Koech’s new friends helped him to see that the reason students weren’t changing at the other schools where he had worked was because of the way teachers looked at them. A beautiful building and strict discipline were not enough to get students to learn. At Cardinal Otunga, teachers and staff look at students in a different way, with a look full of trust. The students come from the Kahawa Sukari suburb of Nairobi as well as from the nearby Kibera slum. Koech described how, when they opened the gates on the first day of school, some parents took their shoes off because it was “so clean.” One mother said to Koech, “Are you sure this is for my son? Why would someone do something like this for him?” He realized, “That mother taught me something. We take things for granted. We don’t deserve it, but we are given something very beautiful. That is the feeling I want my students to have.”

In her response, Jackie Aldrette, Managing Director at AVSI-USA, confirmed a suggestion Carozza had made in his introduction. She explained that the problem of poverty in the world was not so separate from our “first-world” problems; in all cases, these problems provoke the question of how we face the world. She described how her own desire to help the poor began with her study of international development and has included about over 10 years of work with AVSI. She did not neglect to describe the struggles she has sometimes faced when her romantic ideas don’t seem to match up with her current work behind the screen. In those moments, she remembers something her colleague Ezio Castelli told her; when asked the reason why he did the work he did, he answered it was not because “we have the solution to someone else’s problems. We do this work because we have received something; we do this work because we have been loved.” This judgment became a criterion for Jackie when work has seemed mundane. “I asked myself: is this about me and about what I can achieve or produce? Or does my interest in the life of someone far away come from something else…from a really deep sense of a belonging and having met something that gives my life meaning.”

After the initial responses, Carozza asked a question about the dynamics of risk and human freedom in addressing poverty. In her answer, Aldrette described her experience with observing what happens when we bet first on the freedom of the people themselves and of the local organizations that respond to extreme poverty. Koech’s answer supported this idea. He spoke again about how he looks at his students. “Students can see when teachers have doubts about them. When teachers are worried about their problems or whether they can do well. [But] when I encounter someone who trusts in me, the good will come out of me.”#NewYorkEncounter