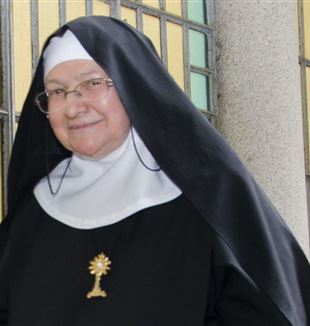 Mother Geltrude Arioli's first "encounter" with Fr. Giussani took place thanks to the stories her fellow sisters told her. It was 1962, the year she entered the cloistered order of the Benedictine Sisters of Perpetual Adoration. She was 23 years old and had a degree in philosophy from the Catholic University of Milan. "I did not know who Fr. Giussani was then. They were stories full of congeniality and enthusiasm, which sparked curiosity in me," she says today in the monastery on Via Bellotti in downtown Milan, where she was prioress until 2016.

How did you get to know Fr. Giussani?
We were organising an educational service for elementary school to high school students in the monastery. Fr. Giussani used to come and hold the Student Youth Raggio meetings with the girls (the institute was only for girls) from the two high schools. At the time, there was a boarding school for students coming from afar. Giussani, having learned that one of these girls could not return home on weekends, often spent a few hours with her on Sundays so that she would not feel alone. The student remembered this throughout her life, which says a lot about him. But there is another episode....

Tell us...
He once showed up at the Raggio with a rosebud in a vase. As the girls admired the flower, he suddenly destroyed it. The students looked at him in shock and Fr. Giussani said, "This is what happens to the fresh young women, full of enthusiasm, who waste their life." He had begun with an example, creating a tense atmosphere, to make a point. Moreover, he was good friends with the nuns. I remember a nice anecdote, which I think also says something about his temperament. The nun in charge of the gatehouse was a bit curt and one day she answered the phone asking, ”Who is this?" Fr. Giussani replied, "A thief!" There were many details that immediately made him interesting and likeable.

Did you meet in person?
Yes. The first time it was from afar, in the sense that I participated together with the other 80 nuns of our community in the meditation that he did in our monastery. There I saw the fundamental characteristic of his person: faith was linked to life. But the real encounter happened later in his sphere: education.

When?
In the late 1970s, because of the need for staff, we hired teachers from outside, most of them from the movement. It was a turning point for the school. As principal, in agreement with the prioress, Mother Cecilia Beltrame Quattrocchi, I thought of calling Fr. Giussani so that he could help us set up educational work with teachers. During the meeting, he highlighted the pre-eminence of the educational project created on the Rule of St. Benedict, as a reference that would bring together the work of the nun teachers and lay teachers. I noticed with great joy that he shared my enthusiasm for the multiplicity of charisms within the Church; he knew how to appreciate the creativity of the Spirit and encouraged to value the different presences of Christian life in the school. In fact, among our students there were young people from Azione Cattolica, from the Focolare movement, Neocatechumenals. That is the communion that is born from the Mystery of the Trinity: love as a communal relationship among those who are different. That is, different forms of witness that can live within obedience and mutual acceptance for a journey towards freedom. This is what your name says: Communion and Liberation. In Fr. Giussani's thought, and also in the way he expressed himself, I immediately perceived a harmony with Benedictine spirituality.

For example?
Let me return to the theme of obedience, so dear to me because I experienced it personally. The Rule in this sense is very clear: obedience is a free, conscious choice based on dialogue and a personal relationship in charity. Above all, it is rooted in faith and not on a generic idea that one must follow a certain direction, a discipline.

You said you experienced it personally.
When I was asked to take over the presidency of the school. At the time, it seemed crazy: I did not feel up to it. Moreover, these were the lively years of the protests that had to be confronted. I expressed my objections to the prioress who listened to me and then said, "The good of the school and the community demand this sacrifice." Saying yes and in the fruitful growth of my personal relationship with the Mother, manager of the school, I saw how the Lord works in a miraculous way if one obeys relying on His grace.

What about the harmony with Giussani?
Like St. Benedict, Giussani conceives obedience in tune with Christ's obedience to the Father, which each person must pursue in his or her own life – this is the true witness. "Gift of the self," Giussani said. Words that strike me because they express an otherwise impossible capacity for love towards the other and from which the desire to serve the person flows. These are principles that apply to all Christians: from the nun to the student. And the Benedictine Rule calls for mutual obedience among brothers. This fosters the emergence of educational relationships that shape people who are rich in critical, living, creative intelligence, who know how to stand in history within a confrontation that builds.

Even within a cloistered monastery?
Until 1996, the year of its closure, our service to the Church was through the school. After ... things have not changed in an essential way. We still have educational paths in a broader sense: courses, retreats... but above all our task of perpetual adoration asks us to keep vigil with the Lord, reaching out to the hearts and sufferings, to the questions of our brothers: to watch, like a mother with her sick child. We are at the bedside of the world. Today, due to our age and number, we can no longer experience night-time Eucharistic adoration, but in prayer, united with Christ in the Eucharist, we watch over the world. Clausura does not prevent us from being attentive to what is happening "outside," including through those who knock at our monastery.

Who comes to visit you?
People with simple requests for prayers for the health of loved ones, but also families in crisis, or men and women disappointed by life.

Even young people?
Yes. For some years now I have been reading the Bible with small groups of boys and girls, helping them to recognize the Word of God in the pages of Scripture, a light to know themselves and their task in life. Just recently a group of teenagers told me that choosing something in life that is forever is impossible. In particular, there is a great sentimental stumbling block, in which I perceive a great error: they confuse loving and being loved with the superficiality of what gives pleasure. What I see is that for them God is the "big boss," the judge, the master. Their eyes widen at Isaiah's words, "You are precious in my sight; your name shall be my Joy." If a person does not experience God's love, they do not even know themself, what meaning and value their life has. It is a continuous journey, a continuous conversion, which means never feeling that you have arrived. Listening to these young people, I think the root of the evils of our time is that we do not know that God is free love, limitless forgiveness. Humanly impossible.

Read also - "Something I had never seen before"

Can we say that we do not experience this?
Yes, or perhaps we do not have eyes to see. We close ourselves in individualism: I think of myself, others get by. The outcome of this approach to life is ultimately despair. In order not to fall into it, one must cultivate desire, which subsists only if it is in relationship with the other. Desire is one of the forces that moves history, especially if we do not reduced it to the level of need, but allow ourselves to be carried by its openness to the transcendent.

As Giussani said, "The forces that move history are the same that move the heart of man."
There is one last episode that is very close to my heart. It was 2003. Among the doctors treating Fr. Giussani was the oncologist Cesare Bartoli, father of the current prioress Mother Maristella, then a novice. Fr. Giussani came to the monastery to meet her and told her that she had a wonderful father who expressed his faith in caring for the sick. In addition to the then Sister Maristella he also wanted to meet the other novice. It was a brief meeting – he was already ill – but full of awe and gratitude for what the Holy Spirit had raised. I was struck by his humility, which further confirmed his human greatness and authentic holiness.#100Testimonies