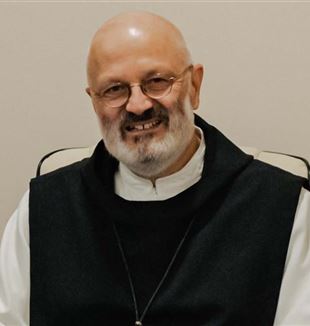 There are certain unforgettable dates in the curriculum vitae of a monk: when he perceives his vocation, when he is admitted into the monastery, and when he makes his final profession. In that of Fr. Mauro-Giuseppe Lepori, the abbot general of the Order of Cistercians since 2010, there is another date that is “perhaps the most important one after the date of my birth,” he said on the occasion of the Spiritual Exercises of the Fraternity of CL, “because it is the date in which Christ came into my life and everything about me finally took on meaning.” It was February 25, 1976. He was 17 years old. He lived with his parents and two older brothers in Canobbio, a small town in the Italian-speaking part of Switzerland. He went to high school and participated in the parish. “That evening I was invited, together with a small group of young people, by a family of Friulian immigrants from the CL Movement. There were Luciano, who was a carpenter, and Nella, a housewife, who took care of their three small children. Nothing out of the ordinary happened except for an encounter between my dissatisfied heart and a presence that told me, ‘Mauro, I am here, and I am here to fill your heart with joy.’”

Why did you go to their house that evening?
Luciano had invited a small group of young people from the parish to his home with the idea of organizing a Mass. It had been my mother, during a meeting, who pointed out that we needed to get involved in the parish more. So I went with my brother. It was a poor house, but there was something I had never seen before: the communion among them. I remained impressed by a small fact–before leaving, Luciano took out the Book of Hours and invited us to recite Compline. I was devout and usually prayed at church, so it was not so much the gesture that struck me, but his freedom. We were strangers, but he let us see all of himself.

And what happened afterward?
That evening I met not only Luciano and Nella, but a place of friendship that responded to the loneliness I felt at that time that was also looming over my future. I was seventeen; I had friends, I had a passion–almost an idolatry–for studying and for hobbies. My loneliness was from not having encountered something that really filled my heart. There was an abyss of sadness that I knew well and to which I had often felt my life give way. But in that house I was surprised by another abyss, that of a joy that was not mine, that I could not have generated myself. And this was followed by the objectivity of duration, because then, for many weeks, I was happy. My first reflection on that first encounter was to go look for that little group I saw reciting Lauds in a classroom of my school. And then I began to follow up on the invitations of my religion teacher, Fr. Willy, who accompanied the experience of GS (Student Youth) in Canton Ticino. On Sundays we went to two Masses: that of the Movement in Lugano, and then we hurried to Canobbio in Luciano’s small car to participate in a Mass organized by our small group in town.

How did you discover your vocation?
It was something that matured parallel to all of this. But here too there was a precise moment. It was in 1977, during a pilgrimage to Assisi. We were at the Portiuncula and, during the sermon, a friar said something about vocation. I don’t even remember what, but in that instant the joy of that first encounter returned to me–it was the same phenomenon. Like when you meet the same person again. It was unmistakable; it was Christ who was calling me again. I had no idea how, but I knew I wanted to follow Him.

And in the meantime, you had enrolled in college…
Yes, I was attending the School of Philosophy with the prospect of becoming a secular priest. But then that joy came back to life and upset all my plans.

Where did this happen?
I went to prepare a demanding exam in the Cistercian Abbey of Hauterive, close to home. And again, in being there, I had the same experience of joy. It could have been a psychological suggestion, a feeling that meant everything and nothing. But what saved that experience was the fact that each time, together with the joy, I was given a companionship to whom this joy referred, with whom I could take steps.

What attracted you to St. Benedict? And how did the charism of the Movement open you up to the Cistercian charism?
I never had the impression that I had to choose between one charism and the other. There was a continuity. The charism is Christ who attracts you, who shows you the way. The Movement helped me because it never proposed a form to me; rather, it always educated me to the substance. Thanks to what I experienced in the Movement, I was able to look at and embrace the substance of the Benedictine Rule with an amplified sensitivity. Even though I understood this in the following years, I must say that even in the form that it took, the Movement is inspired by the Benedictine methodology as it affects conceptions of community, authority, prayer, culture, and silence.

Did your relationship with Fr. Giussani accompany you in this choice?
There were some dialogues between us, and I remember each word. But what I remember most is his gaze. He looked at you and made you grow. I perceived an esteem for me, which it was clear to me I did not deserve, but which arose from the gratuitousness with which he looked at every particle of reality. And then I was struck by the way he was the first to become a disciple, to become a son. In that moment with you, he wanted to learn everything. He hung on your every word, but without flattering you. He listened to you with total loyalty, and so he corrected you, even if only by a millimeter, if necessary. He did this without disheartening you–a “but…” was enough. When I met him after becoming an abbot, he dropped to his knees, and said to me, “Father, a blessing!”

Another decisive figure for you was Bishop Eugenio Corecco, a theologian and one of the leaders of the Movement in Switzerland…
From him I received the same gaze full of charity that I received from Giussani. When I was a college student, I had the grace to live with him for five years. As a university professor, he had wanted to open the doors of his large apartment to a group of students. It was a fountain of graces from which priests, bishops, cardinals, but also lay people engaged in the world and in the church have poured. It was almost normal to have Von Balthasar or Christoph Schönborn for dinner. It was a place of education without the pretense of being so. Paradoxically, I had very few personal conversations with Corecco, but there was the shared life and the meals together–where we brought up the issues of study, university life, and girlfriends. Corecco had only one concern: that we were aware of the things that happened to us and how we lived them. I remember going to bed in the evening with my heart bursting with gratitude for experience of freedom I was having. Admittedly, living there wasn’t always easy; it wasn’t a comfortable life. He had us experience also hardships and quarrels at that same level of intensity. So even my narrow-mindedness and my humanity had to come out for me to look at them and want to change. And changing was always a grace.

At the Fraternity Exercises, you said that “the Gospel never ends,” because we are surrounded by a multitude of witnesses who show us that “Christ is the life of life.” Who are these witnesses for you?
There are witnesses that I carry inside and that I may have only met for a brief moment. Yet they are like fathers and mothers to me–my person can no longer express itself without having that relationship inside. I think of the eyes with which Mother Teresa looked at me or the meekness of Cardinal Van Thuân. I am describing an intensity of life that Christ, in becoming incarnate, places into even a single instant of our life. And I am reminded of the grandchild of a dear friend, born with a very serious malformation of the head and face…

Do share.
Right after he was born in 2000, he was entrusted to my prayers, but I had never had the opportunity to visit him. Then, one day, when I was in Switzerland for a wedding, my friend said to me, “Come visit Matteo, we are five minutes from there.” I had no escape. Those five minutes were the most intense of my life. I was afraid and I prayed a lot. But when I entered his room, approaching his little bed, I had the impression of coming from the dark and going toward the light. The fear and discomfort vanished. Matteo, who was unable to speak, began clapping his hands and playing on the keys of the toy accordion he had next to him. I saw his extraordinary ability to relate. He was happy we were there with him. I have never had such a physical and evident encounter with Jesus Christ. A mysterious friendship began with Matteo. From then on, he has always been there for me. I returned to see him shortly before he died in 2016, on the Feast of the Guardian Angels.

What allows one to confront innocent pain? During the assembly of the Exercises, when a Ukrainian
woman asked how it was possible to see the Father in the atrocities of war, you said that you feel this question to be some homework for you. What did you mean?
Our responsibility toward war, and toward all the wounds that afflict humanity, is to say our yes to Christ within the fragment of reality we encounter. This could even be collecting a piece of paper on the street.

And what makes this possible?
We must go back to where the encounter with Him became real, where He took possession of my heart, to those people we felt were the truest friends of all. It all hangs on our freedom. If there were someone in hell who said yes to Christ, hell would disappear. In a mysterious way, we give God permission to enter the world and to embrace it, generating a beauty that is impossible for us.

What were these Exercises for you?
A gift that I have received. Even the reflection on Martha was unexpected. I thought of using the Gospel episode only to introduce silence on the first evening. Instead, it happened that in the previous days, while I was preparing the texts, I was overwhelmed by my concern about the outcome of the Exercises, forcing me to go back to these words of Jesus: “Martha, Martha, you are anxious and worried about many things. There is need of only one thing.” I had to realize that I had to understand that I didn’t need to do the Exercises well, but that I needed Christ to do them. This shift freed me so much that I had nothing else to offer you.#100Testimonies