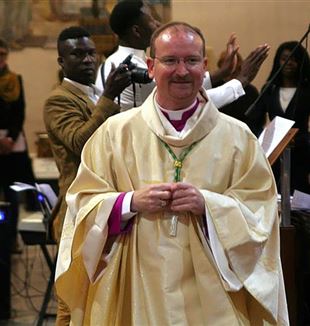 Nicolas Lhernould is the youngest French Bishop. He was born on the outskirts of Paris 45 years ago, graduated in Sociology, has a Master’s degree in Econometrics and became a priest in Tunisia. On December 9, 2019 he was appointed head of the Algerian Diocese of Constantina-Ippona, of which St. Augustine was pastor in the 5th century. He was ordained the following February 8. A few weeks later, Algeria also entered lockdown.
Its history is a story of love for the presence of the Church in the North African countries with a Muslim majority. He arrived in Tunis for the first time in the nineties as a student.
He wanted to do a few weeks of volunteer work during the summer. He returned the following summer. And then for civil service, during which he taught Mathematics in a Catholic school. It was in those years that his decision to become a priest matured, convinced by the "face of the Church" found in Tunisia. It was Monsignor Fouad Twal who welcomed him into the Diocese, where he was first parish priest in Sousse and then in Tunis, becoming vicar general.
Today he is one of the new faces of the Church in North Africa and, before him, he has the challenges of a small community immersed in a rapidly changing society.

What is the reality of the Church that you have found in Tunisia? What has made a breakthrough in the Church?
My first impression, already during my weeks of volunteer work, was of a family Church. Everyone knows each other, everyone has time for each other, there are no challenges of what is called "mass pastoral care". There were spaces for dialogue and fraternity. The other aspect that won me over is the affection I felt for the locals. The Tunisian Muslims. I once asked one of the nuns who first welcomed me in Tunisia what the secret of her sixty-years spent in the country was. She replied: "Love for the people." This is my experience as well. Another important thing that also linked me to these places is the desert. Not so much understood as a geographical space, but as a spiritual experience, and as a relationship with the world of the Bedouins.

How was your vocation born?
It has to do with God's sense of humor. I started thinking about the priesthood when I was 12 years old. I spoke about it with a priest in France. When I arrived in Tunisia, I had no plan to stop. Then, to push me to take the first step, God gave me a... sprain.

In what way?
A sprained foot. During my first year of community service, I was teaching math at one of the diocese schools. I lived in La Marsa, a town 10 miles from the capital. The Sisters of St. Joseph of the Apparition celebrated the bicentenary of their founder and asked me to lead the choir during the solemn mass. A few days before, however, I hurt my foot and they put a big cast on it that prevented me from commuting to work. They offered me a room in the rectory of the Cathedral, where I stayed for a month. It was during these days that I clearly heard the call and decided to confide in Bishop Twal. That is when it all started.

What have you discovered about yourself and about the Church over the years?
That we are a drop in the sea, but a drop with a scent that people recognize. The community in Tunisia is made up of people of 80 different nationalities. Many do not stay in the country more than five years. The flock changes its face. And there are few pastoral structures. But when you have nothing, you are called to live the word of Jesus more intensely: “By this all men will know that you are My disciples”. Poverty fosters fraternity, which becomes a dialogue of life and a "Visitation". This is the reality that is lived in Tunisia and that I find here in Constantine, even more accentuated. Here the community is at least ten times smaller. 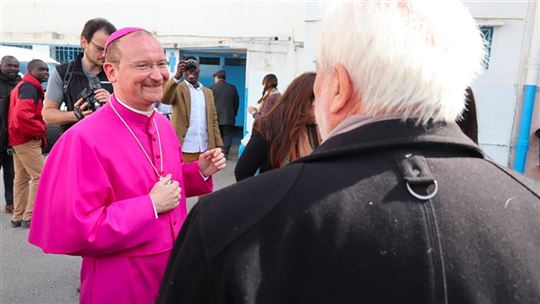 Both Tunisian and Algerian societies are in a period of great change. What are the challenges that face the Church?
Our communities have been present in these territories for 18-19 centuries but, even though they are composed of a large majority of foreigners, they live a strong sense of belonging to society. We consider ourselves an Église citoyenne, a church that brings its own stone to participate in the construction of the building of society. Our countries are living important pages of their history. I lived in Tunisia before and after the Jasmine Revolution, which brought beautiful things but also great challenges. We live in a cultural, political and religious laboratory. Civil society is increasingly asking the Church for her witness in the great debates. And not only on an inter-religious level, but sometimes our opinion is also about internal Islamic issues.

Can you give an example?
Shortly after the revolution in Tunisia, a round table was organized entitled "What religious policy within the framework of the second Tunisian republic?” A topic that would have been
unthinkable even just a few months earlier. University professors, journalists, men of culture... There were many questions: how to behave in regards to fundamentalism? How to train religious personnel? What relationship must there be between society and religion? They also invited a Christian and a Jew. I was the Christian. Faced with the debates, we were asked how, in our stories, similar problems had been dealt with. We were on this occasion, so to speak, catalysts for dialogue about burning issues for local Islam.

And today in Constantine? What challenges do you face?
I arrived on February 29 and in mid-March the confinement measures for the pandemic began. The places of worship were closed, and communities could not gather. It was frustrating: I could not meet and get to know the people. On the other hand, this situation encouraged a more spiritual relationship with everyone: communion is rooted first of all in prayer. And I learned to be more attentive to things that I did not usually look at calmly. To develop relationships of closeness and solidarity. To become aware of existing difficulties, which would emerge with greater clarity, such as the fragility of many families’ economic situation.

One of your first gestures as Bishop was the Mass for Fr. Giussani’s anniversary of death. How did you meet CL? And what strikes you most about our experience?
When I arrived in Tunisia, I met the Memores Domini who worked in the Diocese. They were among the people who welcomed me and were part of that "face of the Church" I was talking about before. They taught me to engage in community life in different ways. One of them once organized a performance of Miguel Mañara in the crypt of the Cathedral and entrusted me to direct the performance. In short, for me, CL is the Memores of Tunis who, once I became vicar general, were also among my closest collaborators.

What sustains your faith the most?
Prayer and the Eucharist especially. When we celebrate Mass, often there are only two or three of us, yet there you see the real presence of Christ. We are pages of the Gospel, living amongst people who, for the most part, will never read the printed Gospel. We like to call ourselves "church of the encounter", like the one between Mary and Elizabeth. Our Lady carries a treasure in her womb and is aware of the other treasure carried by Elizabeth. The reaction of her cousin arouses in Mary the words of the Magnificat. This is our experience: the encounter with people follows the same dynamic. Very often I find myself touched by my Muslim friend’s life, who does not even know what the Gospel is, but it is through his life that God reaches me, and vice versa. We often discover the ability and joy of walking together in the spirit of the Kingdom, of the Beatitudes. It is up to us to put a name to this fact, to encourage it, to celebrate it.

When did this happen to you? Can you give an example?
One year, we left with a group of friends for a retreat in the nomadic zone in southern Tunisia. A girl in the group was an occupational therapist, hand care specialist. One of the nomads who accompanied us had a daughter, Fatma, with a paralysed hand and asked her if she could visit her daughter. After the visit, the girl told us that she had not had the courage to say that there was nothing to do. Shortly afterwards, another son of the Bedouin arrived, bringing a gift of a carpet of very high craftsmanship. It was a carpet made by Fatma herself with her one hand. It was invaluable. And yet, what had the girl done? She had gone to visit her, she had a gaze of goodness. And the family recognized that the gesture was worthy of such a gift. In the desert, we find relationships of this kind that are treasures, which nourish your life and make you understand something profound, about man, about God. In this sense, one of the key words for us in these places is "hospitality".

What do you mean?
It is of important cultural and religious value here. We are not really called to host, but to let ourselves be hosted. We come first to be welcomed. Jesus says: "Whoever welcomes you welcomes me." It is an action that seems passive, but it has an extraordinary value. Today this is a dimension limited by the pandemic, but you can live it already in different ways and we will return to be able to do so.