Highway 3, four am. The coach that is taking the group of secondary school students from Buenos Aires and the surrounding area to the Sierra de la Ventana breaks down. None of those present had imagined that they would have to wait for five hours, stuck on the road and, apparently, "in the hands of God".

Such a beginning to a vacation certainly not only puts everyone’s willingness to the test, but also the freedom to face reality as it comes: such inconvenience could be experienced as the prelude to an unfortunate journey, as the preview of an endless series of setbacks, instead, during that five-hour wait, what prevailed was a human atmosphere of companionship that preferred to "watch the sunrise" rather than complain about how it should have been. The light that appeared was that of freedom that allowed everyone the simplicity of being more themselves. Even in difficulty. They themselves emphasized this several times, speaking of that freedom: it was not so much about "doing what they wanted", but rather about recognizing that something exceptional was happening.

Joaquín, for example, never ceased to wonder why his friends were as happy as he was, and he wondered what made it possible: "I was surprised at how this thing I was experiencing was for everyone, and also at how, in the face of the needs of some people and mine, I saw Christ act. I think of those who wanted a different friendship, and during these holidays it happened. Even when one of the hikes was cancelled because of the rain, and when we listened to Alessandro d'Avenia's beautiful, unexpected video-testimony”.

Luján, on the other hand, understood that this freedom to cling to what she makes happen, also allowed her to make mistakes: "I was responsible for the songs, along with a friend. The first day, although I was tired, I was not weighed down by having to prepare them for the introduction, even if they were not perfect. In other words, I could be myself, I was good, without thinking that they would love me less or that I would make a bad impression". Cecilia, responsible for GS in Argentina, was very impressed to see such a change in so many: "In every one of them, there was a new humanity in which one could see the true presence of Another, because our will alone is not enough: some of them dedicated themselves to welcoming the young people and to the welcome lunch, others took care of the walks or the "cultural" proposals. For me, it was like seeing Christ walking there, among us".

An afternoon in the swimming pool, maths and group work. "Is anything an encounter? What are the characteristics of a real encounter?". These questions, among others, animated the dialogues. Take Enzo, for example, the eldest of the group, who said that he found, in others, a way to live the most demanding things with joy, that within this companionship he saw himself helped to face himself and his limits with a more human heart. Rosario also experienced her last summer vacation with GS and was surprised by the strength of this friendship: "I realized that there are many ways of relating to each other that I do not know. A lot of the time, I have no idea how to take care of relationships. I see this particularly when I argue with a friend and think about how difficult it is to say, ‘God is here too’. There is a song that says, ‘Put God at the center.’ It is like the Lord is saying, ‘I know you had other friends, but let me in and you will be able to solve a little problem better than you had thought.” 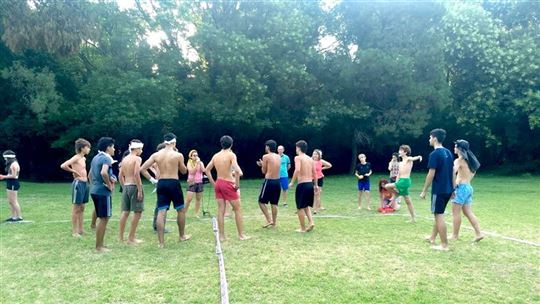 Fernando perceived the echo of something exceptional that grasped his heart: "The most precious thing was the companionship. It may sound like a cliché, but it is something beyond that. This trip has been an opportunity to understand that my life can and must go beyond the superficiality of so many daily relationships. It has been an opportunity that God has given me in order to start again with new friendships, those in which one can be oneself, one hundred percent". Simon, in turn, was struck by the days together: "I enjoyed doing many things with my friends. I can do these same things with others, it is true. But when I do such things with others, I never think about it again, or relate what we did to the things that happen to us every day".

Two of the gestures that marked the last afternoon were a play that recounted St. Francis of Assisi's meeting with Sultan Al Kamil and a video-testimony by Alessandro D'Avenia, in which he spoke about three encounters that struck him in his adolescence. Rich days, during which Julieta and Luigi, who had not seen each other for a couple of years neither at school nor on holiday, met again. Julieta remembered him sleeping during her religion lessons. Yet, during these days, she saw a new young man: "I see his change and I believe that he embodies the theme of these holidays: for him too it all began with an encounter. And this gives me extraordinary hope. For me, this friendship is the hope for Argentina. It seems exaggerated, but it is. I do not know if a group of teenagers normally comes back so happy after a few days spent together doing simple things: a hike, games, seeing a play... This friendship speaks of an Other. 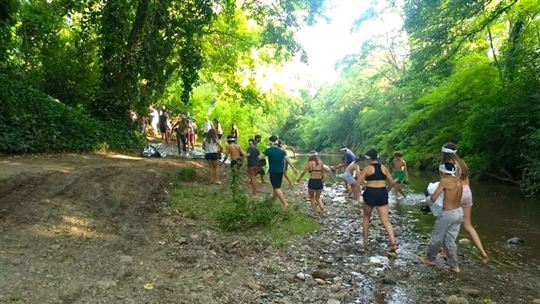 For Luigi, the dialogue with Julieta and Águeda, another teacher, was fundamental: "When Julieta said that what had happened to me was a concrete fact, that God was with me, she made me recognize that thanks to that first encounter, to that yes of mine, and thanks to the people who constantly "generate" me, I can live even more intensely. If something like that happened, it can happen again many times, to the point that I too can generate something new in others".

D'Avenia's testimony impressed everyone to the point of igniting dialogues full of questions about life and allowed the questions of ‘who am I’ and ‘what story do I have to tell’ to come to the surface. You cannot speak about what you do not have, but you can only talk about your experience, your life. Águeda stressed a key point: "How many times, instead of thinking about the 'story you came to tell' to make your contribution to the world, do you let yourself be led by what you 'have to do'. It is easy, even when you do the right things, to forget yourself and what you want. That is why I enjoyed hearing the young people during the assembly say: ‘I want to have the colors so that God paints His image with my life.’ I discovered, in myself, this same desire that they have.

After the vacation had finished, everyone went back to their everyday life. The same streets, the same houses, the same faces they had left behind, all awaited the young people. But they were no longer the same: something had happened. As the School of Community says, "to experience a total correspondence with our heart is something absolutely exceptional…It should be something normal in life, but, on the contrary, it never happens. When it does happen, it is an exceptional experience”. Then all that remains is to ask that it happen again, that it happen again.#LatinAmerica #GS