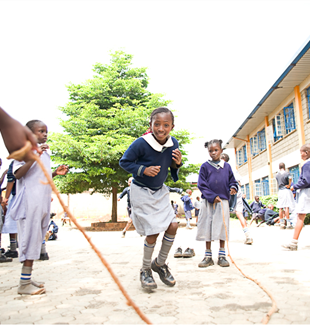 "On the peripheries of existence." These are words Pope Francis frequently uses to describe some of the poorest places of the Earth, where misery, war and hunger jeopardize human dignity. In 2014, AVSI Foundation, an international NGO created in 1972 and currently developing humanitarian and development projects in 30 countries, invited the acclaimed Irish journalist John Waters to visit some of these communities where misery, conflict and starvation are overwhelming. His journey resulted in the exhibit “Generating Beauty: New Beginnings at the Ends of the World,” which comes to the US for the first time, after being presented in Italy and Switzerland. The exhibit is one of the highlights of this year’s New York Encounter (15-17 January).

“In 2014, I was asked to contribute as curator to the creation of an exhibition on the operations of AVSI in three locations: Ecuador, Kenya and Brazil. The exhibition would look at the educational projects which AVSI had built in these places, rooted in Don Giussani’s vision of an educative method which places the development of the person – the generation of a new subject – at its centre,” remembers Waters, referring to the Italian Catholic priest, educator and public intellectual. “Our exhibition offers neither an economistic analysis nor a pious homily. Rather, it’s an existential analysis of the human condition variously called ‘exclusion’, ‘marginalization’ or ‘peripheralization.’"

Through 19 panels, “Generating Beauty: New Beginnings at the Ends of the World” presents three different realities: a group of schools of Nairobi, Kenya, founded to offer quality education to the poorest youth; a center for nutritional education in São Paulo, Brazil, based on the responsibilities of the parents and on the familiar and social bonds; a new form of early childhood education in the suburbia of Quito, Ecuador, aimed at enhancing the individuals and their resources poverty too often burdens.

“In a month or so of journeying, we encountered people who should have been broken or beaten down, who were instead new people, full of hope, passion and affection,” remembers Waters. “To the Kenyan slum of Kibera, the Ecuadorian ‘invasion’ of Pisuli, into the favelas of São Paulo, AVSI had come bringing an unexpected method of education, in which each student is treasured, looked at and placed at the centre of the endeavour.”

Water’s journey began in Kibera, one of a dozen slums ringing Nairobi, Kenya. There, up to a million people are crammed together in a shanty town of mud constructions and open sewers, with rubbish littering the dirt tracks between the huts.

“Yet, in the Little Prince Primary School, an oasis in the center, the children seem like children anywhere,” describes the Irish journalist.

Waters had his most startling revelations in São Paulo, in the work of CREN, the Centre for Recuperation and Education in Nutrition, supported by AVSI as part of its work in the favelas.

“There, we came upon the proposition that malnutrition and obesity are really different sides of the same coin, sometimes co-existing even within the same family. Malnutrition has to do with the scarcity of good food, or the wrong food, but even more has to do with a form of amnesia, ” remembers Waters. Nurturing does not come ‘naturally’, but is a wisdom carried in a culture, and when cultures are ruptured by scarcity and drought, and the people must move elsewhere in search of a life, the wisdom of aeon is left behind.

The New York Encounter takes place from January 15-17, 2016 at the Metropolitan Pavilion in NYC. After New York, “Generating Beauty: New Beginnings of the Ends of the World” will be exhibited in Washington D.C.#NewYorkEncounter