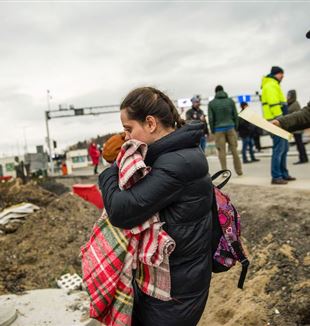 We are with the Pope and with all those who are doing their best to stop the horror of this war. We are with the Pope, who defends and proclaims peace. But how fragile is the desire for peace if this desire does not become a task, a daily responsibility, to build experiences that ensure education, work, charity, and justice for our people, and every peoples.

Much has been said and much will be said about the causes and possible short and long term effects of this senseless invasion of Ukraine by the Russian army. As Christians, our gaze is first and foremost fixed on the human: men, women, children, the elderly, the sick and dependent, who are suddenly threatened by the nightmare of bombings, a lack of food and basic necessities, the loss of loved ones, and who are forced to flee their homes, abandoning everything to the unknown. Will they find someone who wants to take them in?

We cannot think of standing by and watching events unfold, waiting for them to pass; and this is not only because this time the conflict goes to the heart of Europe, but because we will suffer the consequences of this tragic war for a long time. Aeschylus already observed that the first victim of every war is the truth. Lies feed hatred, create enmity, open deep scars between Christians who are brothers and sisters in the faith who fight each other without knowing why.

We recognize that the words of Pope Francis in Fratelli tutti are very true at this time: “Every war leaves our world worse than it was before. War is a failure of politics and of humanity, a shameful capitulation, a stinging defeat before the forces of evil. Let us not remain mired in theoretical discussions, but touch the wounded flesh of the victims. Let us look once more at all those civilians whose killing was considered 'collateral damage'. […] Let us hear the true stories of these victims of violence, look at reality through their eyes, and listen with an open heart to the stories they tell. In this way, we will be able to grasp the abyss of evil at the heart of war."

In this hour of anguish and torment, of uncertainty for the fate of our Ukrainian brothers and sisters, adhering to the Day of Fasting appealed for by the Pope to the whole Church next Ash Wednesday (March 2, 2022), we invoke the intervention of the Holy Spirit through the intercession of the Virgin Mary, the only "living fountain" of hope.