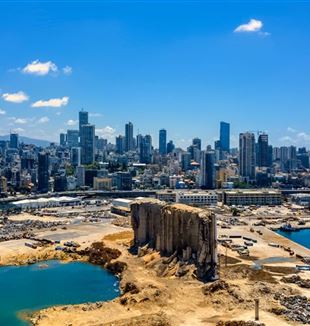 They have now gone back to blended learning; some lesson take place in class, others through distance-learning. "But after months in which we had to do everything remotely, with six hundred teachers following five thousand children, it's already a good step forward". Marina Molino Lova, who is married with two children, directs AVSI in Lebanon, where she moved in 2008, after graduating in Agriculture. With a doctorate planned at the American University of Beirut, she ended up both finding work and a husband. She thus decided to stay in this beautiful and tormented corner of the Mediterranean, which was once called "Switzerland of the Middle East" for its richness and the co-existence between cultures and religions, which now only appears on the global radar when there is bad news.

The latest round of news headlines involving Lebanon was on August 4, 2020, with the catastrophic explosion at an ammonium nitrate depot: 220 dead, more than 6,000 injured and the center of Beirut collapsed, with $15 billion of damage. It was almost a mortal wound for a country that six months earlier, just as the pandemic broke out, declared itself in default because it could not repay international loans. Since then, everything has gone crazy: inflation is at 120% per semester, 40% unemployment, GDP down 9.5% by 2021, continuous power cuts, soaring petrol prices... Three Lebanese people out of four are now living under the poverty line. If you add the perennial refugee crisis, exacerbated by the war (along with the 4 million local inhabitants in Lebanon, there are almost one and a half million Syrian refugees and half a million Palestinians), and you get the picture of a situation that would need a stable government like air. Instead, it has to deal with very low-level politics: the government set up in September, after 13 months of stalemate, is very weak, and the elections scheduled for March are a giant question mark.

"With the last crisis, the economy collapsed: 40% of the activities closed down, salaries are only enough to pay for petrol and many public schools were closed for months," says Marina. And AVSI, which has been working in the country since 1996, has had to "adapt its response to the needs." Whereas before development projects were set up with a special focus on agriculture, a sector that is still worth a good slice of the GDP here, a whole list of emergencies are now being tackled, with a special emphasis on education.

"We organize activities for Syrian children, to prepare them to enter the Lebanese school system: from kindergartens, to kids between 10 and 14 years-old." Then comes professional training: "We work alongside the Ministry's agricultural schools and organize courses for adolescents and adults.” And, additionally, technical training, psycho-social support for young people, relations with companies for internships and with institutions for cash-for-work projects, which allow dozens of people to find an outlet for their training. "They help municipalities do maintenance work that otherwise no one would do," says Marina. Or they participate in projects such as Rubble to Mountains, which recycles the tons of ruins from the explosion: it is collected, selected and largely transformed into gravel, to fill in disused quarries and to allow for the reforestation of the hills.

Cash-for-work is a model that also applies to agriculture, and it works. It's no coincidence that in the Christmas Tents campaign, the fundraiser that AVSI organizes every year all over the world, aid is also provided for community gardens, abandoned land that will be reclaimed, equipped with irrigation systems and entrusted to 120 vulnerable people, with the task of cultivating them: the harvest, then, will be distributed to the needy. But the Tents will also finance long-distance support for 1,200 children, help for 2,850 families and the construction of Fada2i, the multifunctional center designed by Mario Botta and under construction in Marjayoun, in the South. "It is one of the most troubled areas of the country", Marina says. "First the war, then the Israeli invasion, then the embargo and then the war again." Coexistence has become an open wound in these parts. "But we see that it is possible. It is difficult, but possible. It has always been possible, for decades. That's why we're building a place where we can organize communal activities, between Lebanese Christians and Shiites. "Fada2i" means more or less 'my universe'. It will be ready in May."

Who knows if in the meantime Lebanon will have at least begun to take some steps forward, to move away from what Marina defines as "a crazy impasse. Elections should take place in the Spring, but there is no prospect for change.” And within the crisis, corruption has found even more room: "You can now buy families in hardship for three dollars a month. The great risk is to revert back to a parochial, factionalist system.”

That's the last thing anyone who really loves this country wants. "We're not a people who wait for a ready-made meal, we never have been," says Rony Rameh, a Lebanese, AVSI employee and one of CL's managers in Lebanon. But it's hard to get by when you only have power for two hours a day, and the rest of the time you have to use the neighborhood generator, or the gas canister that you bought in October for 300,000 liras which now costs twice as much, and who knows how much next month. "Those who are paid in dollars are holding out, those who are paid in liras can't make it," adds Andreina, Rony's wife. "The other day, at the supermarket, I saw a little boy with his father. He must have been five years old and was asking: 'Shall we buy this? Can we get this? Daddy, is it a no to everything?’ You should have seen that man's face."

For Andreina, Lebanon is "a country of God, and has always been: the Lord speaks about it to Moses and it is mentioned more than seven times in the Bible." Seeing it like this makes one suffer. "Many families can't afford to send their children to school," adds Rony. "Here, education is the most important thing; people are willing to sell everything to put their children through school. But they can't do it anymore. Many are leaving. Boats are seen sailing to Cyprus, Europe. Meanwhile, Beirut airport has become one of the hubs of the traffic that brings migrants to the funnel of the Belarusian borders.

Rony and Andreina are holding on. "If we were alone, we wouldn't succeed," she says, "But what gives us strength is the companionship of faith. We can share our pain, look at friends. And that gives us hope. There is a presence that allows us to see the good in a reality full of darkness. There is something for us here, too." She says that "after twenty years of adhering to the movement, we have realized more and more how decisive it is to belong to a companionship like this: it helps us to live". She adds that "it is this friendship that has educated me, that has made me realize what Christianity is. Before I was a formal person, tied to tradition and that's it. Now I am tied to reality.”

Marina also speaks of "staying" and of "hope" when she talks about herself and how she perceives the future. She does so with modesty, almost circumspection: "I married a Lebanese man, we have two small children. You ask yourself a thousand questions: what is the price you will pay for them by deciding not to leave? What kind of education will they have? The explosion has been devastating also from a human point of view. There is a lot of mistrust and it is a context that pushes people to close themselves off.” She adds, "I have been welcomed here. I have seen the beauty of a people in their welcome, in the values they have. I saw it in the uniqueness of this place." Hope, for her, lies here, "in what the Lebanese continue to be. This beauty is still here. It is suffering, but it is still here. We must help it to allow it to flourish."