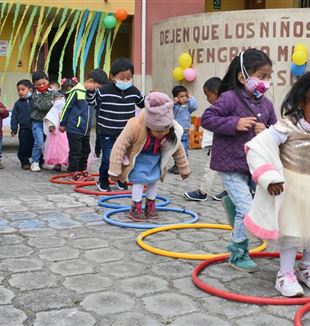 Jamilette has begun to talk and love again, and it all started with the study aid she received during the Covid pandemic. The city of Quito, in Ecuador, has suffered due to the pandemic like the whole of South America, but in the "Invasiones" – large territories often occupied through violence by poor families who want to illegally build their homes here, to live near the capital – the price of cultural and human poverty is high, much more than economic poverty: "Relationships are violent, often dictated by instinct, and the value of the person is nullified. Drugs and crime are widespread," explains Stefania Famlonga, responsible for AVSI distance support in the country and director of the "Fundaciòn Sembrar", which has operated in Quito since 2004. What she cannot forget, however, is what a 12 year-old said to her only a few nights ago: "She has a terrible past, and came here in the middle of the pandemic because she was looking for a place where she would have an internet connection to follow her school lessons online. At first she was introverted, did not talk, and could finish little of what she started. But she never stopped coming. In July she came to our summer center, then signed up for another of our projects. On one occasion she was in the kitchen with me and said to me, with tears in her eyes, that she was going to spend the few dollars her estranged father has given her on a gift for her mother. She had realized that her mother had suffered a lot for her and had made many sacrifices."

This is how the title of the AVSI Tents Campaign, "You are the heart of development", is better understood: it is not just economic support, but first and foremost the promotion of the growth of an "I". One of the campaign’s projects focuses on Latin America to support three entities that work with local personnel in the sphere of education and development of the person. The first is Fundaciòn Sembrar in Ecuador, which plans activities for early childhood through the "Ojos de Cielo" centre and through the PelCa (home education path) with family support and programs for school-aged children and their families, as well as study support, recreational activities, career guidance and vocational training for young people, especially thanks to the "Luigi Giussani" center. The second is the "Crecemos Dijo" in Mexico, which carries out school support activities from early childhood to adolescence, educating on proper nutrition. And lastly, in Brazil, "Cren" is engaged in the diagnosis, care, research and in educational activities relating to malnutrition in children and adolescents.

"Avsi has been working in Ecuador since 2000 through distance support. I have been here since 2004, when this project was born," continues Famlonga, explaining the importance of education. "The first projects were aimed at young children, starting with their mothers. Then various initiatives took turns and were transformed into three programs that are still running today: one aimed at young children, one for young people and one for women." Today, more than 1,200 people are involved in Fundaciòn Sembrar, a flow of faces and relationships that has suffered from the impossibility of meeting in person during the lockdown. "Initially we had to continue our relations with the beneficiaries virtually, but since October 2020 we have been able to resume meetings in person."

The current health situation, explains Famlonga, has now become more manageable thanks to a good rate of vaccination in the country, "but the emergency has made us face, even more, the question about what we do. The kids attending our center need computers, an internet connection. In general, what we can offer are physical spaces, such as the kindergarten, the youth center, the workshops. The real purpose of our activity, however, is to offer meaningful relationships with adults and educators who are able to ignite the flame of desire in these people. Due to the low self-value to which they have been educated, many of these young people have little desire to live, and we need to invest in this to rekindle their hope."

This is what happened to Alejandra, who is 19 years-old: "She has been with us for many years and has now begun working as an educator. During a Zoom assembly, she told us about her difficulties at home with her family, but also how one day, during a heated argument, she felt the desire to experience what she had encountered with us with her parents as well. So she had found herself preparing lunches and dinners, setting the table, clearing the table, and being with her family with this deeper question."