"I had to say goodbye! Now I can go home," shouted Innocent as he ran towards the motorcycle. He is a boy who goes to the Luigi Giussani High School in Kampala, Uganda, and he does not look innocent at all: he is one of those difficult students, often grumpy and angry. However, as soon as he heard that the rector of his school had come to see him, without a second glance, he ran through the narrow streets of the slum where he lives to look for him. "Who would have thought that I would run after the rector?", Innocent thought to himself as he walked back home.

To better understand Innocent and reason for running, we must start from a photocopier and a bicycle. This is all the teachers at the Luigi Giussani school had in March 2020, when the school had to close due to the Covid health emergency. Distance learning does not exist here; almost no one has internet access. Thus, each teacher at the Luigi Giussani began preparing handouts to be delivered to the school's 500 alumni so that each could pursue study individually. "We printed out so many handouts that the only copy machine we have began to smoke. She was a good companion, we will not forget her," jokes the school's director Matteo Severgnini, known as Seve, reminiscing about those weeks. 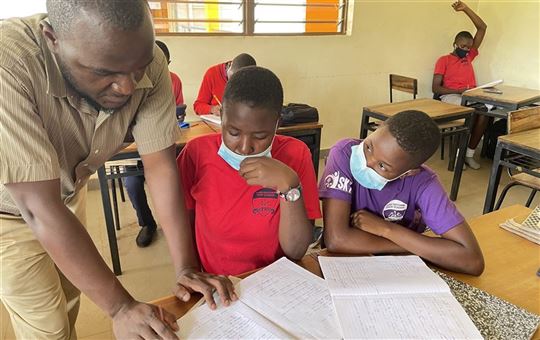 When the handouts were ready, principal Michael collected them and set off on his motorcycle, the only means allowed during the lockdown. He rode up and down the streets of Kampala every day, knocking on the students' doors to deliver the handouts. "You can get to us here as well? Thank you!", said a young man, moved, after finding himself in front of his principal with that photocopied envelope for him. And if many were incredulous to find that unusual letter carrier at the door, for others "there was no lack of disappointment in having to do homework," says Seve.

Restrictions today have eased, but schools continue to remain closed. And the light at the end of the tunnel still cannot be seen. Rather, it can be seen, as the school's teachers say, in the eyes of the "letter carrier" who, on returning from his rounds, spoke of the young people and the surprise with which he was greeted. "This is a sign that everyone's heart truly is made to be “knocked on'," says Michael. Even the hearts of a number of teachers who, struck by the stories, in turn began to visit their students. "What we saw was evidence that education is not the only problem these young people face," explains Seve. "So many of them are living in dramatic situations that I could not even imagine."

"But where can such a thing happen? In what kind of school do the teachers visit their kids at home?" asks Rose Busingye, high school principal, to the faculty gathered to decide how to continue helping the students. "What touched you so deeply that you moved? We can either answer that question, or any solution to their need will always be ephemeral, short-lived. What has touched our hearts?"

As the weeks go by, the more stringent the provocation issued by Rose becomes. It cannot be avoided, but it is equally clear to everyone that it cannot be answered alone either: it is necessary to simply be with the young people to discover what lies at the origin of such a commitment. This is the starting point for the "Flying School" project, supported by the Italian NGO AVSI.

And it did not take long before seeing teachers leading study groups in the street, about thirty kids at a time, near their homes. Of course, teaching outdoors is difficult, and the quality of teaching suffers, explains Seve, "But the Flying School is allowing us to really look at the challenges our students face and remind us that we are not alone."

Read also - “You are the heart of development”

One of the groups gathers in the shade of a large mango tree. Among the students is Mejori: she and her sister live alone as their mother is away cultivating vegetables in a garden. These are needed to feed the girls and any extras are sold. When their teacher went over to invite them to the Flying School, they filled a bag of tomatoes for him. "Ah, but then also give me also three onions and two carrots, thank you," said the teacher putting his hand in his wallet. "No," replied Mejori, "They are free! If you want us to come to class, accept the vegetables. Everyone has given up on us, but you have not. You guys continue to stay with us."