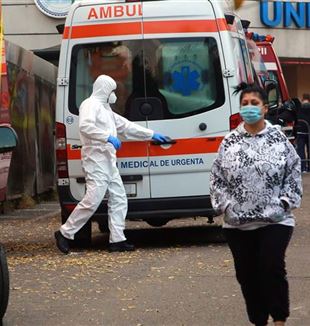 Mariana has four children and a husband who emigrated to Germany. He is a worker and suffered a work injury, and is now stuck in his bed far from home. She can only call to get news. And wait and hope. At home, everyone has been infected: his wife, his children, even the eldest, who is 19 and used to be a driver before becoming unemployed because of the pandemic. David, on the other hand, has three children. The youngest is only one and a half years old. He has not been infected and can play with his brothers and his mother, who is one of the few here to have been vaccinated. But they are locked in the house, and they all try to stay as far away as possible from their father's bed. He also has Covid.

These are everyday scenes in Romania. They are the same scenes we too have seen again and again, and would like to forget quickly. There they cannot, however, because the pandemic is having a ferocious upsurge. And so many families, especially poor ones, find themselves in lockdown, without work and without someone to lend a hand.

"The situation is dramatic,' says Simona Carobene, director of FdP-Protagoniști în educație (Protagonists in Education), an association that helps children and families in difficulty. “Since the summer, the number of infections has been out of control. In October, we had more than 10,000 deaths, in a country with 19 million inhabitants.” November started badly too: 590 people died on the first day. "The worst news I heard last week was about two young women who died in the courtyard of a hospital to which they had not been able to be admitted," Simona continues. "A few days ago a 24-year-old mother died, a month after giving birth."

On TV, you can see reports very similar to those we saw in 2020. Hospitals lack oxygen and beds, intensive care units are overflowing. In Iași, on the border with Moldova, funerals have been suspended; there are too many coffins for the 'Petru si Pavel' cemetery chapel. "There is a curfew from 10pm, and primary and secondary schools have been closed for 15 days now, and there is no certain re-opening date,” says Simona. Masks are compulsory everywhere, private parties have been suspended, and anyone without a vaccination pass cannot enter shopping centres and non-essential shops.

The spread of the virus is inversely proportional to the number of vaccinations: the vaccination campaign is slow (at the end of October 39% of the population had been vaccinated) and only in recent days, in the wake of the emergency, has a peak of 80-100 vaccinations per day been reached, thanks to marathon days in 24 hour vaccination centres, which the government organised last weekend.

In such a situation, there is an emergency within an emergency: the poor. The pandemic is hitting the families helped by organisations such as FdP the hardest. "We assist more than 120 families, mainly in the Faur-Republica and Giulesti-Sarbi districts," says Simona. And the number increases every day, "because word of mouth spreads, but above all their need grows. If parents fall ill, we welcome their children at our educational centres, when we can. And we take food and medicine to those who cannot afford it." They take supplies to mothers like Petruta, who has a sick child, and whose husband is in hospital, she herself also waiting to have a serious operation which has been continuously postponed as the wards are packed. Or to Augustina, a widow, locked up at home with her two young children. All three of them have Covid.

To face such need, in recent days Simona has also asked her Italian friends for help: “If a poor family falls ill, like all the others, they are forced to stay at home. But unlike other families, once in quarantine, they cannot cope with the basic needs: medicine and food. The poor are also poor in relationships, their neighbours cannot help, and they usually do not have credit cards. You can support us by spreading this appeal and making the situation known. Donations can be found on the website.”
Many have already taken action. Besides the support offered to Mariana, David and many other parents like them, FdP is thinking about how to widen the field. "We are asking families to tell us about the needs they see around them," says Simona. They are in contact with a couple of hospitals that need monitors, oxygen monitors and respirators. "They have them, but the equipment cannot keep up with the number of infections," says Simona. And there is great need.