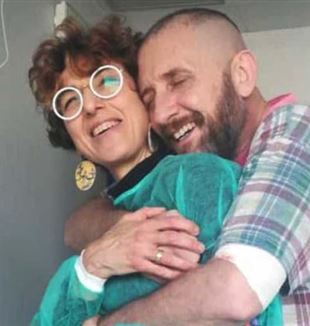 At the end of July 2019, my husband Carmelo fell ill with acute myeloid leukaemia and on August 1 he was hospitalized, began to have his first round of heavy chemo and found out that he had to undergo a bone marrow transplant to fight the disease. Right from the start Carmelo faced everything – his illness, the discomforts, his 100 day hospitalization, the pain of the very invasive treatments, the isolation –by abandoning himself happily and confidently, always grateful to recognize, in every detail, even the most insignificant, what he called "the caress of the Nazarene." In order not to forget about the beauty that he was continually experiencing, he wrote in a diary almost every day, entitled "notes of a preference”. I will now quote one of the many passages:

[...] It was a great day anyway, even today, which began with the mess of the difficult blood sample, my two brothers who are like guardian angels, my mum, so small that she insists on preparing the things I like to eat and who accompanies me discreetly (but with who knows how much suffering inside! ) in my carrying of the cross, Lisetta who is always a new gift, never taken for granted, the essential messages of some friends of the Fraternity, the messages of someone else who brings me back the luxuriant fruits of his moving in the world with the education we draw on, the unexpected visit of Bishop Baturi, Rosaura’s phone call, the video call with Jacopo and Giuditta, their messages, the attempt to call Massimo who I will now call [...] What has happened in this hermitage today? In this rectangular room? While I am suffering and not hiding my fatigue from these 24 days of hospitalisation, a life has happened here. Christ does not leave me.

At that time I was travelling from Noto to Catania, where he was hospitalised, travelling two hundred kilometres there and back every other day. I can still remember the great fatigue, the tiredness, my worry for every minimal change, but above all I still have in front of me my husband’s happy and certain face who challenged me. I lived everything in silence, praying with him, asking for healing, but above all asking to experience the embrace of Jesus even in that painful circumstance. Carmelo and I received a great deal during that time, in terms of the companionship and prayers of friends, both near and far, and our marriage bond also deepened and became more essential: we began to experience the One who holds our marriage together in a more transparent way.

For months we lived in isolation, first in hospital and then at home, waiting for his marrow transplant, which took place in January 2020, after five days of very heavy chemotherapy. That is how his recovery began, slowly, very slight improvements from day to day. The drugs began to wear off and to be taken away, in May we started talking about resuming work, in July we moved to the countryside and slowly life began to slide into the routine of normality. We began to leave behind us that heavy and tiring period to dedicate ourselves to future projects and the work to be done.

In January a year later, we received the terrible news that the disease had returned. Shortly afterwards, Carmelo wrote:

[...] My heart broke at the news (despite the high probability) that it was back. A relapse was probable. But was meeting with Fr. Eugenio among the probabilities? He slipped in my medical records, the statistics and the probability curves and the prediction indices... I do not know what the drug I am taking is doing to my mutated cells. I do know, however, that my question for Christ's companionship in my life, in everything (really in everything), at every moment, has become more important than the wish for the miracle (which I am still asking for..., are you kidding?) of my recovery. What am I to do with a "healthy" life without the fullness of Christ's companionship? I really want to be happy in life and be with happy people [...]

Meeting other friends with whom we were following the daily Mass online was a turning point with regard to the question of the meaning of the circumstances we were experiencing. Seeing people with happy faces even in suffering and pain because they are certain of being loved and made for a good Destiny really repositioned our hearts. It was, and still is for me, a journey, a beginning to look at this circumstance not as a misfortune, but as the opening of a new horizon in which even the prospect of death is not to be feared because it is part of a journey which leads up to the embrace of a Father who at every moment continues to make us, to want us, to love us.

We have lived the time that has been given to us, savouring every moment of the day, giving thanks in the evening for the day that has passed, and in the morning because one more day had been given to us to live. Seeing my husband transfigured by this certain awareness of being loved by Jesus, was, for me, the experience of a hundredfold.
My husband celebrated his arrival in heaven on June 20 2021. More than four months have passed and I find myself rejoicing in the acute pain of his physical absence. I continue to ask to recognise Jesus in the folds of my days and I surprise myself by experiencing His companionship in the beauty of the sunset, in our beautiful countryside, in the flowers in the garden, in the early mass celebrated at my home during the summer by a priest friend that was followed by a dinner with those who attended, many and often unknown people, who came by word of mouth. But above all now His face is that of my friends who embrace me and support me in every possible way, keeping me company "to the marrow". Thus I think back to the Beginning of the Year Day and to Fr. Giussani who said: "The substance of my “I” is the fact that You want me, oh God… " My daily request is that this awareness may grow.