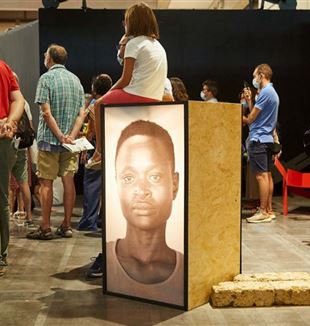 "Where I come from everything is a scam, what if I'm a scam too?". I unplugged my headphones at this lyric before entering. It is a lyric by Marracash, whose interview excerpt Pietro told me was part of the Meeting’s exhibition "Living without fear in the age of uncertainty". Marra has always been relentless, and seems to know better than anyone else: "It's me who perceives what's wrong, it's me, my only god is freedom", he sang a few years ago. I looked at myself in the glass at the entrance while waiting for the security checks; my hair is longer than usual, my mask is on backwards, but I only now realise it as no one had pointed it out to me, and yet everyone must have noticed. Just like Vitangelo Moscarda's nose, a character of Pirandello, that they taught us about at school and that was mentioned by Javier Prades in the session on the Meeting’s title: "The courage to say I". Like Jules’ "avatar" in Euphoria and the "the thousand layers of non-me" it wears; she also figured at the Meeting, as part of the exhibition "A burning question". Marra says in an interview: "But why am I like this? Why do I have this stuff inside me?" Both inside and out, enough for him to ask himself: "What if I'm a fraud too?” They checked my bag whilst I was thinking all this; I passed through the metal detector and walked aimlessly through the Meeting’s pavilions.

There are many people, but one child caught my eye. He was jumping, as I used to, on the white tiles. I watched him to see how he would deal with the grey strip that broke the checkerboard. He stopped and looked around. A woman, who I assumed was his mom, continued walking without losing sight of him. To the left was the water of the West Pool. I could have bet that he would have dashed towards it but instead he went towards the glass wall on the right. The child turned, looked up at the glass and saw another child. He had on the same trousers, the same hat, his favorite. He looked at him, greeted him, as if to pay homage to his good taste, raised his hand and stood there seeing that the other boy reciprocated. A woman appeared next to the other child. It was his mother. When she was about to embrace him, those same hands surrounded him. In Euphoria, Jules says that in front of your mother you just have to stand there and exist, nothing more. I was reminded once again of Marra's interview, "If you're not loved as a kid, you don't grow up well." The scene I witnessed there said even more, as explained by the neurolinguist Andrea Moro on Friday, August 20: "The possibility of saying I" – which was the title of his speech – “is born in front of a you, as the child recognizes his reflection only when his mother has embraced him.”

I met my friend Pietro for coffee, taking advantage of his break from his "work" shift. That is what he called it, but he was not paid and I presume it was really boring: he was volunteering as a parking attendant. At least they put him in the "VIP" area. He was more tanned than when I last saw him, his face was tired, but extraordinarily smiley. The job is just as he had imagined it, but at least the VIP parking is in the shade. The day before, however, he met the bodyguard of one of the guests who stayed outside and asked if he could wait with him under the umbrella. He then began to recount his own life story, staying there for as long as possible. There were many encounters like that, more or less fleeting, but intense so much so that they left their mark on Pietro’s face and Anna’s, the manager of the ice-cream parlour, smile. She could not stop taking about the things that happened with her customers. Pietro told me that he will volunteer again next year, but will not request a specific role as he has understood that it is not the job that guarantees this exceptionality.

Pietro and Anna do not have much in common with Gennariello, whom Pasolini addresses from the pages of Corriere Della Sera. His voice resounds in the fifty hours of reading that formed part of the exhibition "I, Pier Paolo Pasolini". And yet, there is a passage that seems to be addressed to them as well: "If someone has educated you, they could only have done so through being, not with their words. That is, with their love or their possibility of love."

Will it always be so? I talked to Maddalena about Afghanistan, wondering if something similar could happen to those children thrown over the barbed wire? It is impossible to answer this now. But a cry physically enters the silence that is inevitably created. The closer we get, the more it screams. This is a cry of joy but the stories that formed part of the exhibition “You are worthy” were a cry of pain from Uganda. A number of women recounted their stories without sparing any details, like a plunge into the darkest abyss: murders, kidnappings, rapes. But you could hear them singing from afar, in the photos at the entrance they were smiling, dancing. Those desperate existences have been revolutionized by the encounter with a face, which has a name and a surname: Rose Busingye. She, in turn, recounted in a video that she began to look at them in the same manner she was looked at by another face: Luigi Giussani. Thus they too, who work breaking stones, wish to reciprocate the gaze they have received. The "tribe of Giussani" (the Italians, explained the guide) has many qualities, many means, many skills, but they do not know how to break stones like they do, and thus when they learnt of the earthquake in L'Aquila in 2009, they immediately offered to go and remove stones to free those underneath. This was a utopian proposal, but from nine thousand kilometers away they did not give up sending financial help, charging less than one euro a day. It sounds mysterious to say that there is hope, but seeing them it seemed more conceivable to say so.

Read also – Korea: a friendship that is necessary to live

It began to get late. Marracash returned to my ears as I made my way to the exit; he too could not help but direct his most authentic cry to someone, "Hold my hand steady when the time comes, and give me an eternal voice and true things to say. Be my point of stability, something to die for." As I listened to him, I saw a familiar face: Don Andrea. He was emptying the garbage with yellow gloves and a mask, his eyes bright and happy.#Meeting2021