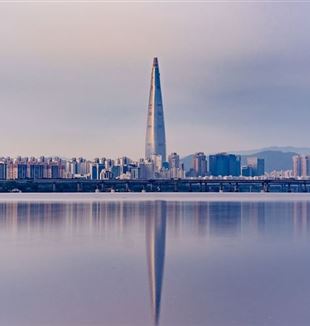 "We need to connect”. This jerky voice came from my computer screen whilst it opened a view onto the other side of the world and onto two faces; just seeing them, whilst smiling, is a real spectacle. But when Maria, a Korean from Seoul, said that in front of Ana, her Spanish friend next to her, you could perceive that she was not just talking about Zoom and online meetings: there is a bond between them, a relationship, a friendship that is necessary to live.

For Maria, a 46 year-old hospital worker, that connection began unexpectedly last spring. That is, when Ana, only a few years younger than her, arrived in Seoul because her company had entered into a joint venture with Samsung. "I was supposed to leave months ago, but the pandemic delayed everything." As soon as quarantine ended, Ana pursued what was in her heart all along: she looked for friends from CL. It was a small group, born about twelve years ago when the family of Francesco Berardi, an Italian manager on assignment, settled in Korea for a while. Mauro Biondi, an Italian from Ireland who often travels to the East for work and who goes to Seoul to visit those friends as soon as he can, gave her their names and numbers. Ana first called Alfred, then others. And amid an “in person” coffee, a cooking lesson and a chat on Kakao, the Korean WhatsApp, he made a simple proposal: School of Community. "We meet online. Due to social distancing and the lockdowns it is difficult to both meet and go to mass together.” 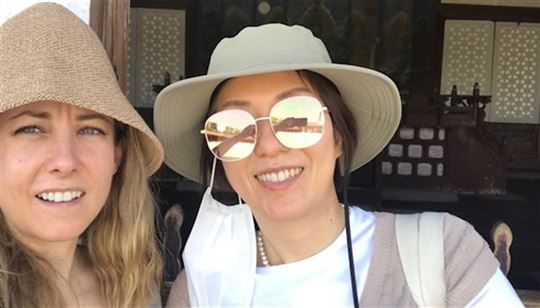 It was from that word of mouth that spread quickly that her friendship with Maria was born. She was one of the first people to meet Francesco in 2008. "I was on maternity leave," says Maria, who is married with two children. "I met his family in our parish, and they struck me. When I was younger I had crossed paths with evangelical groups and followed Catholic Youth for a while. I enjoyed reading the Bible and discussing it with friends. Then, due to family and work, there had not been further opportunities to meet like that, although I had been left with a curiosity for the Scriptures. When I met them, I discovered another dimension. I saw normal people, lay people like me, living a faith-based life." With the Berardis' departure, those "meetings that helped me a lot" became less frequent. "But when Ana suggested we meet, I immediately said yes. Because I knew it was important to me."

Ana and Maria live fairly close by. This is very useful in a metropolis with a population of ten million people where the pace of life is hectic. They can see each other often and bond quickly. A little at a time, a thread of communal friendships began to grow around them. This friendship was made up of simple things ("shopping, chatting... at the beginning I suggested we meet to organize cooking lessons for friends", says Ana), but it has a deep accent: "People asked us: how long have you known each other? And I would reply: actually we have just met."

The heart of the friendship is precisely there, in those meetings via Google Meet every Sunday, at 8 pm. Mauro connects from Dublin, and Francesco, when he is able to, connects from Malaysia, where he has since moved. Another seven or eight people also connect to work together on Julián Carrón’s text Is There Hope?. The comparison of the text with life is a double revolution: talking about oneself, exposing to others what you have inside, is inconceivable, particularly in Korea. And yet, it happens. Maria speaks freely about the last, difficult months and about her husband, Peter ("his Western name"), who has undergone surgery for a serious illness. "But the experience of CL is giving me the strength to accompany him," she says. At the hospital after the operation, Ana was there with them. "When friends tell me they are praying for us, I know they mean it. Because they are real friends, I know they love us. And when I ask for something, I always find answers. I find them in the words of Fr. Giussani, in Traces, in Pope Francis... I always find something in them that makes me feel better. They give me strength, and that strikes me."

And it is strength that digs deeper, which questions deeply. "The purpose of life here is success: money, home, a career," says Maria. "When I was younger, it was all about that for me too. My husband spent years getting there too. He spends a lot of time at the office, but that is our culture: you work until night, and you do not take care of yourself. But what is the point of making more money and having an important position if you do not take care of yourself?" When he was diagnosed, she says, she became even more aware of this. "Peter kind of realizes it, but kind of does not. After surgery and treatment, he is now better. He should rest more, but instead he has already gone back to work. But we need this time to change." She also shared this at one of the last Schools of Community in front of friends who were moved: "I am here because this is the time for me, I need it to live. And my family knows that."

And what about Ana, what has she found in the friendship with her and with others, who until six months ago she did not even know? "I am living the same experience I was living in Spain. Exactly the same. It is another world, the culture here is far different from mine, there are often misunderstandings with colleagues. But I can undertake my own path, which the movement proposes everywhere. Everything is different, but I am not. I am myself. I do not need to be anything else."

Those around them perceive this. "No unbelievable facts, but you can perceive it through details, nuances." For example, in a dialogue with a colleague who is struggling to juggle work and family, the conversation reached the topic of sacrifice and he was struck. "I gave him Giussani's example: ‘If a mother has to get up at night because her child is crying, she does it without any issue, because she is serving something greater’. He was silent for a while. Then, when it was time to go, he said, ‘Okay, I am going to my 'house of sacrifice'.” Or the surprise dialogue with another colleague "when I confided in him that I was worried about an issue at work and was almost in tears. People here never show their feelings. But the relationship deepened right away." Or the bewilderment of another colleague, which allows you to perceive both the difference between the two universes and the thread of humanity capable of holding them together: "I learned that his uncle had died. I went to say to him that I was sorry and that I was praying for him and his family, that they might find peace. And he said: ‘Do not worry, I will be at work tomorrow.’ But he was impressed."

Read also - Edith Bruck. The crack and the light

It is thus here, in this strange land, capable of guarding a hidden sprout for years and having it suddenly bloom, that the friendship between Ana, Maria and those seven, eight faces that connect every Sunday night grows. "According to me, within that relationship is the whole seed of CL," says Mauro from Dublin. “And I keep my eyes wide open to see how the Lord will want it to develop."

What about them? How do they look at this seed? What is hope for you? "Something present," Ana answers, firmly. "I have to touch it now. Hope for me is believing that happiness is possible, and I need it now." Maria, on the other hand, thinks about it for a moment. Then she looks at the webcam, determined: "It is encountering God in my daily life. Sometimes I am very happy, sometimes it us harder. But hope for me is an encounter."