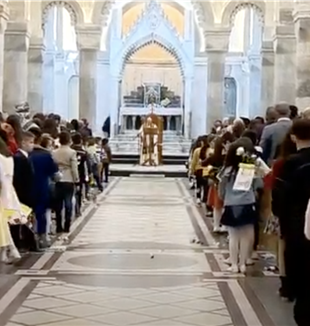 I am Doha Sabah Abdallah. I am recounting to you what I experienced and still experience: the grace of hope that I received. On the morning of August 6, 2014, the city of Qaraqosh was awakened by the din of the bombing. We all knew that ISIS was upon us, and that three weeks earlier it had invaded the towns and villages of the Yazidis and treated them with cruelty. So we fled the city, leaving our homes; after two or three days we returned, supported by our strong faith and in the conviction that, being Christians, we are ready for martyrdom.

That morning we were busy with the usual things and the children were playing in front of our houses, when an accident happened that forced us to go out. I heard a mortar shell and ran out of the house. The children’s voices fell silent as the screams of the adults increased. They informed me of the death of my son and his cousin, and of the young neighbor who was preparing for marriage.

The martyrdom of these three angels was a clear warning: if it weren’t for them, the people of Baghdede would have remained, and would have inevitably fallen into the hands of ISIS. The deaths of three saved the entire city. From that moment, we were exposed to a very difficult and severe trial: they lived scattered in streets, squares and public parks without cccommodation or food. Now there is not enough time to express and explain everything that we have experienced as refugees in three years. But I must say that with the power of God in our priestly ministry "together we are priests" we have been able to help families, be with them, distribute food, clothing and other supplies,

The three years we lived as refugees were not cursed, but years of blessing from the Lord. Then, after the liberation of our cities and villages, the Lord showed us his glory. Everything has been completely destroyed: churches, thousands of houses burned down, and everything looted and destroyed, all without essential services. But the Lord did not leave us, it was a miracle to bring back to life in this city.

Read also - The Pope's address at the interreligious meeting

And here we are today in our beloved city of Qaraqosh. What a copy to see His Holiness in our midst! Who would have thought that one day we would have your presence, Holy Father, in this small country, even if it was in our dreams? Holy Father, thank you for being among us, revealing today the Glory of our Lord in the Church and to the whole world. Bless us, carry us in your heart!