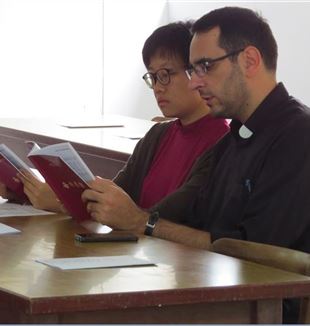 Fr. Donato Contuzzi. In preparation for this meeting, each of us has looked at our own experience and our own encounter with the Movement. I was struck that at times we risk taking for granted a beauty that is absolutely exceptional.

Zheng Zhong. Before 2008 I didn’t know God. In 2000, I began working in Taiwan for an airline company and I met the priests of the Fraternity of San Carlo. When Fr. Paolo invited me to teach a lesson at a university, I discovered that he was also a teacher, and this interested me greatly. I asked him what the doctrine of the church was and he invited me to a friend’s home to participate in the School of Community. That friend later became my godfather at my baptism. In fact, more than a year after that meeting, I decided to be baptized and become Christian. I have no idea how I became so courageous since my family has always been Buddhist. So on March 22, 2008, I received baptism. That year the priests involved me in the work of translating The Religious Sense into Chinese. In 2010, I went on a trip to Italy with them, and during those days I experienced in a deep way the charism of the Movement in a faraway land; in that world, there are brothers and sisters of the Movement who are like a family whose members love each other and take care of each other. Today I participate in the School of Community regularly, and through our reciprocal testimony, I am learning a great deal. Now when I read the question, “What saves us from nothingness?” I can respond with certainty: faith. During my first fifty years I was an individualist. I didn’t know God and I lived a worldly life. In my second fifty years I’ve learned to enjoy the charism of Another by participating in the life of the community. It is my experience that the Movement is not just a movement of faith, but even more it is putting into practice the love of God for women and men to the point of offering yourself. This is my mission.

Julián Carrón. Thank you so much. All of us can identify with your story because it is the story of each of us. Most of us were believers, but like you, we were amazed by the beauty to which we were introduced in living Christianity as Fr. Giussani proposed it to us. Listening to you confirms for us that what we have encountered, is also yours and for everyone. And we are amazed that Christ can so generously fill the heart of a man whom we did not know before and whom we now feel to be such a friend and brother [...]

The beating heart of Xiao Ping