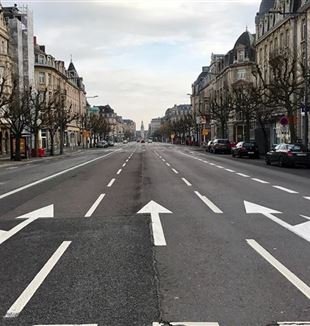 He was blocked by the lockdown at the end of February, for having returned to Luxembourg from Italy at the very time when the epidemic broke out. Simone, a 40-year-old engineer of Genoese origin, recently returned to the offices of a multinational company. "I have lived here for three years, with a wife and three children. This was perhaps the first time I had spoken to Luxembourgers...." Our story starts from here, from this detail, to recount an adventure that began involving him and his wife, and then some friends from the local CL community.

"When they closed everything here too, I began working from home. The Pope’s Mass accompanied me every morning, but I missed not receiving communion.” He discovered that in the parish near home, which he had never been to, a priest was helping the needy: "Come!", the priest answered his request. "We went and we were impressed: there was a table full of groceries and around it some parishioners who distributed them to the poor in the area, who lined up outside the door.” Mostly immigrants, but also drug-addicts who visit a centre in the neighbourhood that gives out methadone. Simone and his wife took communion and asked to help out: "I do not know where it came from. But I was interested by what was in front of my eyes.”

A few days later, Simone showed up with a friend: "We found out that even before Covid, once a week, they took food to the poor. Now the needy came to the parish, every day.” A prayer at the beginning of the shift, order... "They enter one at a time, and each person can receive a maximum of five things to eat and one to drink. And what freedom the parishioners have... Even in saying no to those who want more, aware that the help that can be offered reaches a certain point and that the heart of what they do is something else: to stand before these people because they are there."

From here, it took just a brief instant to involve others from the community of the movement. "He called me and told me what he had met", says Luciano, Simone's colleague. He is also an engineer, with four children: "I have been here for four years and for a long time I wanted to re-live the gesture of charity that accompanied my life in Italy.” He recalls when he went to Cottolengo in Alba, where he had worked for many years. And he remembers the attempts, which came to nothing, to try to set something up in Luxembourg as well: "This occasion came to meet us. We did not think of anything," he now says: "It is true that we are only at the beginning, but we would also like to invite others from the community who live here."

During the emergency, the parish was busy every day, all day: "At the beginning, we covered a few shifts in the morning, in the evening, after work. About sixty people came every day. They would come in one at a time, and we would help them fill their bag. Now we have returned to a weekly commitment, and they moved us to act as bouncers for the distribution of clothes." This is what they call keeping order outside the parish premises in order to only send one person in at a time. And often the waiting becomes an opportunity to have a chat, to get to know these people better.

Read also – The bubble and a different logic

"People who also speak several languages, particularly immigrants who have crossed half the world before arriving here," says another Simone, who has been in Luxembourg for eight years working for a multinational company. Luciano remembers some of them: "There was the one whose wife threw him out of the house and who now sleeps in the car. Or another guy, who was Muslim, who tried to convert me every time, explaining to me why Islam is better than Christianity... I told him that I was not interested, but that I was interested in him, regardless of his faith." But then, when he saw that priest, Fr. Laurent, he stopped: "There, that is him: he is a good priest"." Thinking that "he is someone who gives the impression of always being angry", Simone returns to say: "The parish is in a nice neighborhood, and right across the street, life has now begun again. These people face "injustice" even more than before. And some take it hard sometimes. And even I have to say, "You cannot accept it.”” Yet, this is not enough to be charitable: "No, like the parishioners, who know the limits of what they do, who know that they cannot help anyone very much. You do not save anyone. That is not the point: the point is that you can discover more for yourself, and, for us, this more has the face of Jesus."#CharitableWork