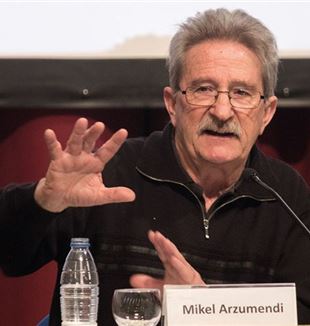 The article has been translated from the original Spanish, published on paginasdigital.es.

It is necessary to give a small overview of our friend Gregorio Luri’s “reticence” towards Julián Carrón’s recent proposal, Reawakening Our Humanity, for these dizzying times of the pandemic and social isolation. These reticences, like those towards Carrón’s previous book, Where is God?, have made Luri perceive the stench of doctrinal "emotionalism", as well as a feeling of “setting aside moral law”, in favor of a "Christianity of experience".

My reflection restores the relevance of Carrón’s book, in that it marks the encounter as the instrument that reawakens humanity, and which allows the human’s capacity for God to resound. This capacity only becomes believable "if we see people whose lives, here and now, show the signs of God’s victory, of his true and contemporaneous presence, and therefore of a new and different way of facing circumstances, one full of hope and an otherwise unimaginable joy that is channelled into an indomitable industriousness. What we need, therefore, more than any reassuring speeches or moral instructions, is to tap into the people who embody the experience of this victory, of an embrace that allows us to face the tender wounds of our suffering and pain, witnesses to the fact that there is a meaning in life proportionate to its challenges” (p. 40). By virtue of this, Carrón devotes a large part of his book to recounting the testimonies of people who, during this sudden isolation, have reawakened the God within them.

Luri indirectly recognizes in himself the fact of the encounter as more decisive than his philosophical faith in moral law; he concludes his reflection by going beyond his reticence "to recognize, without ifs and buts, that no reticence is worth anything in the face of my unconditional admiration for the enthusiastic and insistent dedication of my friends of Communion and Liberation to their brothers." He recognizes that his admiration for certain people because of their dedication to others is more reasonable than all his arguments. Since I have no presumption that he is exaggerating or lying, I must ask myself why this is so. There is only one answer: because Gregorio Luri's admiration for certain people "he has come across" is born from the authority they deserve for dedicating their lives.

Admiration, yes, that is the testing ground of the encounter. Spinoza defined it as surprise at a fact that contradicts our past experience. And he implied that the surprising fact is positive, it is a good thing. It is a surprise, therefore, that generates astonishment. An emotion that positively removes mirror neurons and leads us to the perception that what is so unexpectedly good is also good for me. Jesus worked in this way, intercepting his disciples one by one with his way of being attractive himself, not through moral or theological discourse, which they would have found incomprehensible. Emotion attainable by everyone, because the masses admired Him and followed Him. Another thing was how to make sense of all this; how to affirm that love was the golden rule and that loving God and the other was everything, because the rest of law "was an addition."

The rationality of the strange life of those early Christians was deictic: "Look at how they love each other!" An exemplary life, rather than indicating the kinds of laws they followed or the arguments they were wrapped up in. The method of early Christianity was to stand beside the pagans, mingle with them, as Christian men next to other men, offering a comparison, through which one could perceive the beauty of being Christian. It is the method that we humans use to constantly improve our lives, and the method that immigrants use to leave their lands and come to us. Needless to say, the so-called ad hominem argument is a fallacy of the Enlightenment, because all of them, from Descartes to Kant, were endowed with a good dose of esteemed Christian moral principles that they considered untouchable and superior to that of the uncivilized people (meaning the "non-Christians"). And even giving the highest authority to their traditional principles, they committed themselves to making them reasonable, convinced that their reasonableness depended on the finesse of their arguments (not on their Christian origin). This is the beginning of the failure of the Enlightenment: to have forgotten the authority of the source of morality in order to place it at the origin of the rational lucubrations of the learned and wise.

This is what produced emotivism, dear Luri, that resonance of arguments, each more “authentic” than the last, which continued incessantly for two centuries. Nietzsche took note of this failure: that everyone should build their own values. In addition to Carnap/Ayer's positivist conception and C.L. Stevenson's theory, emotionalism is that current liquid state of thought about the impossibility of validating the ethical claims of objectivity and impersonality. That there can be no rational justification for postulating the existence of impersonal and objective moral norms. In other words, that such norms do not exist. But we can not attribute this to any of the interventions or books written by Julián Carrón, a priest who, "as God commands", will confess your sins according to the Ten Commandments if you approach his confessional. Emotivism is never conceived by human emotion coming from the admiration/imitation of Jesus-love (the Gospel from Monday, May 11, John 14:21, says: "He who accepts my commandments and keeps them, he loves me").

I have stressed the encounter. From the Latin incontra (face to face), the encounter establishes an existential face to face, a mutual looking, speaking and listening to each other. In the encounter there are no rules, only humanity. It is the supreme form of the ‘I’, because it is only in an encounter that one is incarnated as a personal response to the other. It is the test of whether I treat the other as an end in itself, or as a means. Treating the other as a means, I use them as a handkerchief and then them throw away. Jesus said that He was that interposition between me and the other. He called this space love. The Jew Spinoza also perceived this, because the essence of every emotion (he called it affectus) was related to love/hate. Another Jewish philosopher who did not think like Spinoza, and who was born only one hundred years before me, in 1842, thought something very similar to what Gregorio Luri seems to think about law and religion. However, the difference was that, shortly before he died, he understood that this was not the way to think. In fact, after meeting a humble Jew, H. Cohen perceived that God had more to do with the love/hate space of inter-divisionality than with an entity of reason. And in his posthumous book he wrote that "one wonders if it is not precisely by paying attention to the suffering of the other that this other ceases to be a Him and becomes a You.” In other words, pre-empting E. Lévinas, also a Jew, he opened a new ethical path of the I/You, perceiving that even suffering itself existed for the sake of compassion, the existential closeness between him, a needy person, and me, as a possible Good Samaritan. In 1945, after the destruction of Nagasaki (and the death of his wife) by the atomic bomb, the converted doctor Takashi Nagai said exactly the same as Cohen, with the exception that his usual Christian way of grasping it passed through the Shintoism of Buddhist interpretation.
And like Cohen, the Spanish philosopher García Morente, needed the surprise of an emotional encounter – with music in this case- to reach God from his deistic Kant. And he died as a priest the year I was born, but I was able to be reborn like him, even if at a more advanced age, thanks to the encounter with those same people whom Luri esteems so much and whose lifestyle is clearly more existential than "moral".

Therefore, I share Carrón’s presumption that damaged people are not transformed by an idea or a moral obligation. The wound caused by untimely relationships, like the current confinement, is only healed by a personal encounter, which always puts you in front of a different reality and allows you to re-discover yourself different from what you were before. A new truth arises in you as other unknown affections arise in you, which relativize the values with which you used to live. Carrón has given some examples. I know of several more: Chules and Copito with their bocateros (the Bocatas volunteers engage with the marginalized in the drug sphere in Madrid) who engage with the neediest; Nacho wrapped in a "protective suit", going to visit the Coronavirus patients in hospital, bringing comfort to their soul and spirit. And I could go on talking about friends I know, but will give three cinematographic examples that everybody knows: the relationship between Tony Lip and Don Shirley, in the Green Book (by Peter Farrelly); the encounter between the Japanese mime actress Yu and the devastated Rudi, in Cherry Blossoms (by Doris Dörrie); and Clint Eastwood’s heroic encounter with the most disadvantaged boys in Gran Torino.
#ReawakeningOurHumanity