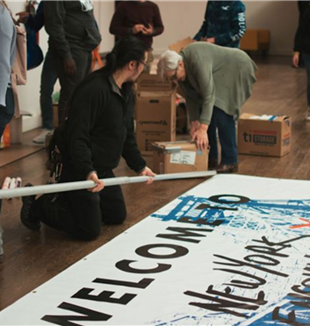 There is an image that expresses manifestly and dramatically the change of epoch through which Western society is passing. At the State of the Union Address, just a few days ago, President Donald Trump refused to shake hands with Democratic Speaker of the House Nancy Pelosi. While the President was being applauded for his address, the Democratic leader conspicuously tore up the written copy of Trump’s speech on live television.

It seems like a century, rather than twenty years, since the American elections of 2000, when George W. Bush prevailed by only 537 votes over Al Gore in Florida, a state decisive on that occasion for his election to the White House. The Supreme Court of the United States opposed the recounting of the results, but Al Gore did not shout about election fraud and, as usual, accepted defeat with a phone call to his rival and invited his supporters to shelve any party rancor, giving way to “the process of reconciliation” for the good of the Country.

A sense of belonging to an American nation, a common home that no ideology can damage, seems broken, almost shattered. And the rift is much deeper than just the radical political division.

For this reason, the organizers of the New York Encounter chose “Crossing the Divide" as the title for the 2020 Edition on February 14-16.

The opening performance, “The Girl from Hong Kong,” sought to deepen, with evocative points, the troubled history of America, woven with great hopes and with wounds that have never truly been healed.

On stage, nine musicians and four actors narrated moments from the lives of men and women in touch with daily life and with the breaking in of the unforeseen. It started with the “American Dream,” referred to even in the American Constitution: man is given certain inalienable rights, among which are life, liberty, and the pursuit of happiness. The American nation was conceived in order to sustain this ideal.

You see this dream evoked by the mothers of pioneer families who established themselves on the plains of Nebraska; or again by the astronaut returning from his voyage to the moon: men and women who left in search of something great and came up against the immensity of nature and the mysterious experience of solitude that makes the search for the infinite even more acute. Not even slavery killed this question: the same dreams and desires, the same thirst for freedom is found in the retelling of interviews with ex-slaves.

Something happened in American society that broke this radical optimism. It is September 11, retold in the performance through articles, reflections, and pieces of novels written shortly after the terrorist attacks. It is a drama that tragically disillusioned Americans, making them think that their dream was in reality a utopia. It is a symbol of a blunt awakening, of the destruction of religious ideals, in the context of the inequality that grows between consumerism and extreme poverty.

The crisis breaks our faith even in the possibility of social and economic ascent. Many fragments follow one upon one another in the performance, expressing emblematically the anguish of the modern world, of today’s America. It is a wound that grips the heart of everyone and pushes so many to close themselves in a bubble where they would defend themselves.

The performance does not make the mistake of ending with a tranquilizing speech: rather it ends by showing someone who does not give up.

It is the old freed slave: “God has been so good to me, to let me live all dese years. I just want to be ready to meet him, when he is ready for me. My only trouble will be to love white folks. Dey have treated my race so bad. My pastor always tells me I will have to forgive dem and love dem, if I wants to go to Heaven. But, honey, dat's goin’ to be a lifetime job. I don't care how long God lets me live, it will still be a hard job.”

The writer James Baldwin shows how it is possible to start again. It is enough to find love. And if, for example, Hong Kong means nothing to you and you meet a girl that comes from there, then Hong Kong becomes suddenly so important that you would get there even if you had to swim. 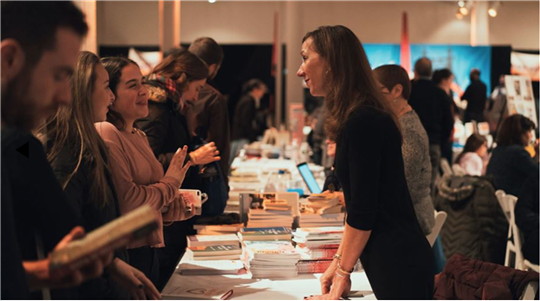 Is this true? The answer of the New York Encounter is not found in performances, talks, or exhibits but in looking at the many people that crowd it. They are engineers engaged in aerospace projects who do not limit their work to their professional capacity, but, looking to the infinite heavens, ask the same questions about the meaning of everything that the first astronauts did. They are the scientists that do not stop asking how they can use artificial intelligence to better our quality of life. They are researchers engaged in finding new cures for sicknesses, pushed on by the desire to alleviate people’s pain. They are artists that seek out beauty again in all its possible forms.

It is the girl who is in the army that in training soldiers asks herself how her work cannot become separated from the faith she is living. It is the group of people in New York who give a hot meal to the homeless or those in Los Angeles who help war veterans that have been abandoned by everyone to find work--because even those who have not been winners in life have the right to our attention and love.

They are young people who, finishing college, do not want to choose between work and what they love. They are fathers, mothers, and teachers who ask themselves together what it means to educate. They are volunteers who come from all over America or those in religious life, who try to generate a community where people feel welcomed.#NewYorkEncounter