Pacaraima, the Brazilian border city, in the state of Roraima, has become a door of hope for the 500 Venezuelans who enter Brazil everyday, fleeing their country.
Many arrive exhausted, on foot or by bicycle. Others arrive by bus, carrying few things, perhaps the most precious things they own. Most of them are very vulnerable people who cannot take it anymore and have decided to leave their land. A man in his thirties arrives in a wheelchair, as does a mother with her pregnant daughter who has a high risk pregnancy. Large groups also arrive: a family with many small children and a group of thirty indigenous people of the Pemon ethnic group. They all arrive at the border crossing point with the hope of finding a better world and leaving a hostile situation.

Along the way some were robbed or extorted and lost their documents. When we live in extreme situations, both the best and the worst of each of us emerges, and that is what happens to refugees living on the border. As Camus used to say: "They are placed halfway between misery and the sun".

We are used to perceiving the border as a wall that separates us. But in this case, the Brazilian border has become a sigh and a door oh hope for those who flee. Today, this place is a land that welcomes, a land that cries and bleeds.

Within an hour, the group that organizes the welcome operation greets each Venezuelan cordially with a glass of water or soda. They tell them that they are welcome and offer them food, vaccines, legal settlement with a resident or refugee status, and provide them with the necessary documents that allows them to travel freely or work in the country, as well as health care, just like the Brazilians.

Venezuelans who enter Brazil through the state of Roraima are, for the most part, miles away from large settlements and do not have the means to reach their destinations. The most vulnerable are welcomed in the many well-organized shelters in the city of Boa Vista, a three-hour drive away. Most of these shelters are managed by Avsi. Other people are cared for and fed by Catholic parishes or other religious denominations, which provide 1,500 meals a day. The poorest of the poor are cared for by the Sisters of Mother Teresa of Calcutta. 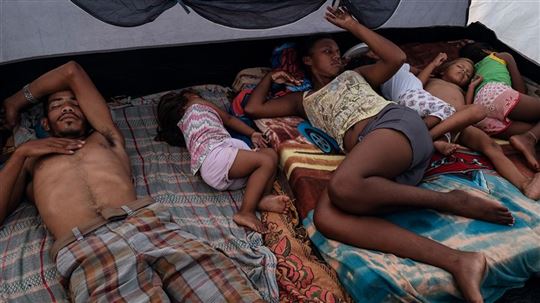 This humanitarian operation is, today, the world’s best example of welcoming migrants, and demonstrates great professionalism thanks to coordination and collaboration with the UN, through the UNHCR refugee agency. These work with great motivation and success together with the Brazilian army and with Avsi.

The Avsi team works like a lifeguard saving the shipwrecked. Most of the 150 people working in this team are young Brazilians motivated by the desire to be useful to the world. Another great thing is that 20% of the workers are Venezuelans, who entered Brazil as refugees and who, thanks to their expertise, now help their fellow countrymen.

This humanitarian operation does not end with the welcome at the border, but continues to search for work and guide those who are sent to the different regions of Brazil. The success of this operation is down to three characteristics, which are the result of a method, an education. The first is the balanced realism with which it is working concretely in this emergency situation. The second is the way in which lasting solutions for refugees are being articulated. The third is the fruit of collaboration and friendship between the institutions doing the work, which reveals to the world the positive importance of subsidiarity for international relations and action in the social field.#LatinAmerica