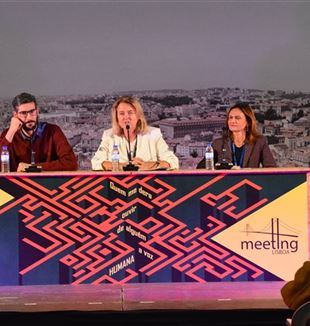 What makes me free? Where do I experience freedom? What gives my life substance and allows me to engage in the world without being a slave? These, and many others, were the questions that Bernhard Scholz, President of the Compagnia delle Opere, posed to the audience, on 6 November, at the presentation of the book L'impegno del cristiano nel mondo [The commitment of the Christian in the world] by Urs von Balthasar and Luigi Giussani, in Casa Medeiros Almeida. This presentation preceded, by a few days, the opening of seventh edition of Meeting Lisbon.

Scholz, by reading some excerpts by the two theologians, followed the revolutionary path that they had indicated: "The commitment of the Christian in the world is born, first of all, from the commitment of God to man. And so we do not depend on our strengths, on our coherence, but we must make ourselves humble and unarmed before the One who acts in us". Scholz, in a dialogue with us organizers of the Meeting, a few days before the beginning, said: "Abandonment is the opposite of passivity, it is the activity of all activities. To abandon oneself means to follow the One who calls us through the circumstances that He puts before us". Thus, he reminded us that our task was to propose to the visitors "not what you have built, but the Beauty you have encountered, so that everyone can compare it with their own life". 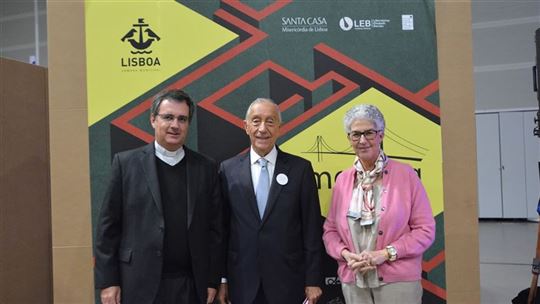 On the morning of 9 November, in the heart of the city, the doors of Meeting Lisbon were opened. This year’s title: "I wish I could hear someone's human voice", a verse from Portuguese poet Fernando Pessoa. Two days of meetings, inspired, above all, by the exhibitions, dedicated to suffering, rock, love, charity: from the life of Cicely Saunders, the founder of palliative care, to that of Friar Bartholomew of the Martyrs, Dominican and Portuguese Archbishop, whom, earlier this year, the Pope had declared a saint. "Meeting means encounter. Encounter means meeting people and things that are needed, and that lead us towards the Christian nucleus: reality is Christ". These are the words of one of the first visitors, Manuel Clemente, Cardinal of Lisbon: "For this reason, the Meeting happens and does very well. May there be more of these events!”

The first meeting was a reading of “A giant human voice”. Teachers from the school of São Tomás and São José of Ramalhão read Oscar Wilde's The Selfish Giant, helping even the youngest children to learn to see beyond appearances. Then, the presentation of the exhibition on Job: "Is there anyone who listens to my cry?". Shortly before it began, news arrived that Marcelo Rebelo de Sousa, the President of the Republic, was at the Meeting and had just seen the exhibition. Thus, we had the idea of inviting him too to “present” it. He immediately accepted. At the end he said: "I want to say something very simple to you: a Christian who is not an optimist, a "realistic optimist", is ungrateful and unintelligent. Because the greatest prize is the divine Grace that has reached us. You are aware of this... And I will be here again next year.”

Among the speakers at the meeting was Marta Scorsetti, a radiologist from Italy. She spoke of herself, of the "most important encounter in my life, that with Christ through the experience of Communion and Liberation. Jesus became Someone that had something to do with me and, therefore, that also who had something to do with my patients and my work". She talked about her relationship with the sick, of being in front of suffering: "When cancer arrives, when pain comes, it's as if life were stripped bare. And everything is simplified, true questions arise. Thus, I discovered that cancer does not always take life away, but can give life. Because a man who is alive is a man who asks. One of her colleagues, after visiting a young mother with cancer, asked her: "Marta, you have to explain something to me: why does God allow mothers to die?” She replied, "I don't know why. But I know that Jesus died for us. I know two people who lost their mother when they were little and who grew up, even with this pain, and they found their way and are happy. What if there’s someone who fulfils our life more than our mother?” At the end of the meeting, Martha re-iterated Job’s words: "I didn't know You before, but now my eyes see You. And what I see happening is Christ in action. 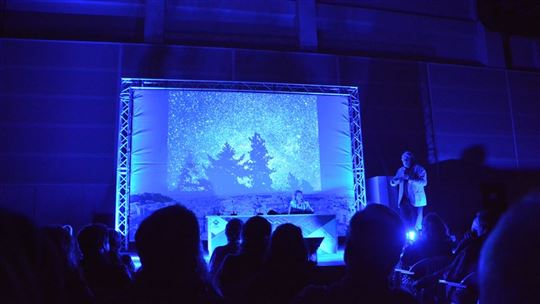 After the presentation, a lady approached her: "She spoke to my heart. A heart that speaks unto another heart. I have never felt such empathy. I am a doctor. I am Christian. I've also been working in groups with other doctors and psychologists to help the sick, for years, but I've never heard anyone speak like this. She deeply touched my heart.” None of us knew this woman, so we asked her why she was at the Meeting: "I am Brazilian. I'm here on vacation. I was passing by by chance. The door was open and I entered, like a dog who enters a church when its door is open. It was cold outside, so I stayed inside a while. And then I started to listen to the talk...". Then she looked at us and asked us: "Who are you?". We told her about us, telling her that the movement is also present in Brazil, even where she lives, in Salvador de Bahia...

The exhibition on Cicely Saunders, promoted by the Portuguese Pharmaceutical Bank, also struck many people, specifically the head of palliative care at one of the capital’s largest hospitals, who later asked to exhibit it in her ward. The exhibition "Casalinho" was curated by the young people who do charity work in this difficult neighbourhood of Lisbon: "This exhibition struck me the most, because you see a life", said Cristina, who came from Rome with twenty young people, out of friendship.

A hundred years after her birth, the Meeting "met" the great Portuguese poet Sophia de Mello Breyner, through a dramatic reading of Il viaggio [The journey]. This was followed by a dialogue with Rosarinho Lupi Bello, a university lecturer, who helped us understand how "the experience of reading is like life: what damages it is making it schematic, interpreting it rather than simply letting things touch it". 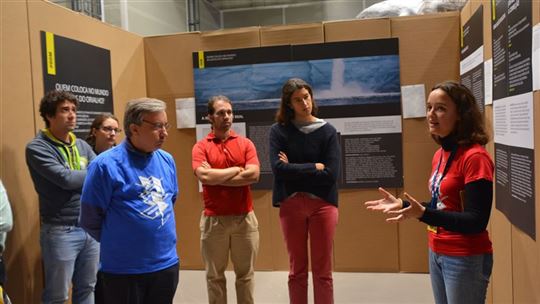 The universe’s first "ultrasound". This is what astrophysicist Marco Bersanelli showed the Meeting’s audience, with passion and tenderness: "He helped us understand, with clarity and simplicity, the history of our "home", said Letizia Ortisi, who is in charge of L'Imprevisto [The Unexpected], the Meeting’s newspaper: "The journey to the root of the universe, up to 14 billion years ago, allows us to discover the unexpected: we are made from stardust. Any slight variation in the distribution of matter would not have allowed human life... Everything was thought out for our existence. My existence. What gratitude.” This is why Bersanelli's reading of Psalm 8 was listened to with amazement: "When I consider your heavens, the work of your fingers, the moon and the starts, which you have set in place, what is mankind that you are mindful of them, human beings that you care for them?". As Pascal says: "All bodies, the firmament, the stars, the earth and its realms are not worth the least of minds, because the mind knows all that, and itself, and bodies know nothing. All bodies together, and all minds together, and all they produce are not worth the least movement of charity. Charity is of an infinitely higher order.”

In the evening, a concert by Spitting Dogs, a group of six university students. They opened with a rendition of Mumford and Son’s Snake Eyes, whose strength recalled the impact of all the beauty that was received throughout the day that was ending.

On Sunday morning, the exhibition "Don't be afraid!", on the family and the experience of love in light of faith. Sister Giusy Maffini, superior of the future Trappist monastery of Santa Maria Madre della Chiesa, which is under construction in Palaçoulo, posed the question: "How can we not be afraid to begin this new monastic experience in a remote place in Portugal? Why shouldn't we be afraid?" This was her answer: "Because we do it to keep the door open to Christ and to His redeeming power. Any other reason would be a weak whisper”. And after the testimony of Henrique Mota, father of five children, Fr. Duarte da Cunha concluded the Meeting, reminding everyone that "happiness is not so much in what I can do, but in what God bears witness for me".

The Meeting is closed by the presentation of the exhibition "Our band could be your life", about alternative rock or indie rock, curated by Maria Pacheco de Amorim, a teacher, together with her friends and her high school students. For her "the novelty of this musical genre is inseparable from the fact that in the lyrics there are fundamental questions of the human, of all of us". The exhibition struck people of all ages, such as Irene, a university student from Milan. She volunteered to sell the exhibition catalogue and told us: "An eighty-year-old lady came to buy it and said to me: "Here, you all have the smile of those who have inner peace, the peace of those who seek Truth with a capital T". Aura Miguel, President of the Meeting, greeted the public: "May this time spent together, listening to such beautiful and different testimonies, help us to always intercept the signs of the Infinite that come to meet us".

The Meeting “does not end”, as Pity said, who, together with other friends, had curated the exhibitions: "In these days, I have understood that everything in life is a problem of faith. It’s a problem of truly believing that He does everything and we only carry four loaves and two fishes".
#OtherMeetings