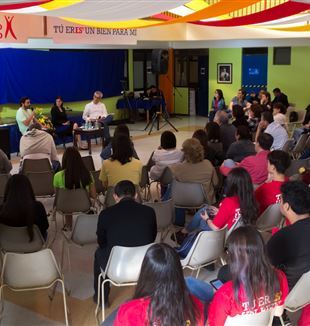 "Hatred and moaning is not an end in itself." This is why it has become even more urgent to say again, to everyone: "Tú eres un bien para mì", you are a good for me. "Because the other is the path of dialogue and also of self-criticism. It’s what is at stake, in a context of distrust and recriminations, it is the gaze of a free man who desires to meet the other, the person - without labels - with his particular history, his desires, his sufferings".

This is how Encuentro Santiago 2019 opened. These are words from a beautiful documented, circulated a few days earlier, when the convulsive situation in Chile had cast doubt on everything and it had not yet been decided whether the event would go ahead. But it still went ahead, even with a reduced program (one day), a fewer guests and a new location (the Colegio San Pablo Misionero di San Bernardo, more suburban and quiet than the very central University of San Sebastián). Because it was worth it. Even more so. 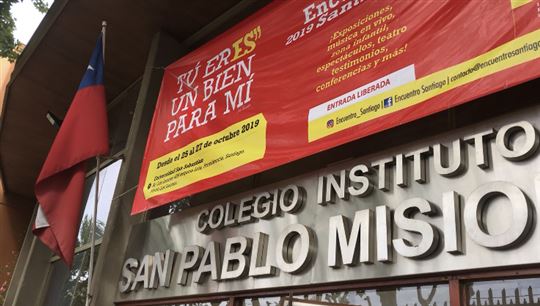 In a country that, not even ten days ago, found itself suddenly plunged into chaos, from street protests to a state of emergency, looting in shops and curfews, arrests and victims (at least 18), in the "bitter hour" that called everyone to responsibility, the organizers decided to take a risk, to offer the world another gaze. "We need something good, to meet and recognize ourselves for who we are, because the need for justice is also part of our deepest desire.”

Saturday morning begins. You can still breathe the nervousness left by chaotic days, the echo of the imposing march of the previous day, which had brought a million people to the square, the uncertainty of the curfew that is renewed every evening. In such a context, the day started with something that could only be significant: the presentation of the photography exhibition entitled "Aima. A look beyond the landscape". The curator, photographer Carlos Infante, explained the meaning of the title. "Aima" is good, what is good for me. First of all, nature is good, a good that has led him to look for photos that arise from an insatiable need for beauty. It was the ideal prelude so that the public could marvel at the artist’s work. An endless beauty, in every landscape from Chile and South America, as well as in some portraits, imposing in their depth. It was a way to enter directly, immediately, into the title of Encuentro. 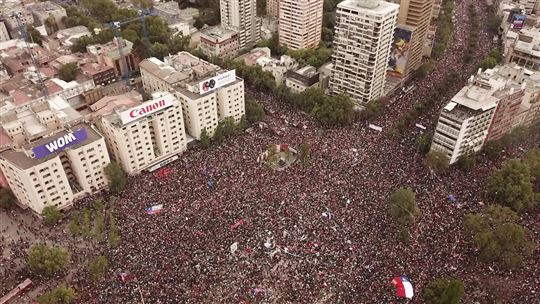 Then, the round table on "Education, a great opportunity for meeting". Guests included former education minister Mariana Aylwin, daughter of the first democratically elected president after the Pinochet dictatorship, and Davide Perillo, journalist and director of Tracce. The initial question posed: "Can the crisis of these days be an opportunity for union? How can a dialogue be generated?". Aylwin responds with a weighty phrase: "After living days of terror, today is a day of hope". She explains: "There is a climate of distrust in Chile. Institutions, such as politics, the military or the Church itself, have lost prestige and authority. There are still neighbourhoods controlled by crime and an elite that seems increasingly distant from the people. There is great unease about social inequality and an increasingly widespread individualism. In short, it's difficult to have the opportunity to meet". It cost the Chileans a lot to regain democracy, "but it almost seems as though today we don’t live up to those moments". Yet, coexistence "can be reborn precisely thanks to education, a true education, that re-launches the profound desire for happiness that we have in our hearts". Perillo describes something that he saw the previous evening, just arrived in Chile. "We were driving in a suburban area, far from the city and the protests. But there, on the edge of the road, in the middle of nowhere, there was a family: dad, mom and two little children, with a flag and pots for cacerolazo (beating the pots is a form of protest that comes from the time of the dictatorship, ed.) I was moved and a question arose in me: "What are they really looking for? What are they saying about themselves, through such a gesture?". They had the same desire that I have, and that we all have here: a need for meaning, for happiness, for justice. If we start from here, from this point that unites us all, dialogue is possible again".

The second question is even more provocative: what does it mean to be an adult today? Aylwin responds by saying that "first it means to welcome young people, to listen to their dreams. And this changes your gaze". She talks about the educational work she has been doing in her own foundation. Perillo begins from this example: "It’s in places like these that subjects can be generated who are able to face reality, even the most complicated. If there are places like these, there is hope. Because they indicate a way, a method. Witnesses are needed". Aylwin adds that "it seems that we want to destroy, but we do not know how to build. But we have the road, the method: it’s dialogue”. She speaks about her father, who in a speech, when the dictatorship had just ended, spoke of reconciliation and of a Chile that belonged to everyone, even "civil and military". And in the face of public protests, she forcefully repeated: "Yes, civil and military". "The worst thing we have done in recent years is not to have dialogued, we have lost the strength that characterized the transition. Perillo reiterates that the crisis "is a great opportunity precisely for this reason: to no longer take certain positions for granted, certain formations, and to return to talking to one another". And it is also an opportunity for Christians, to get to the depth of their experience: "What can answer the need that emerges today? Does faith have anything to say about this?". 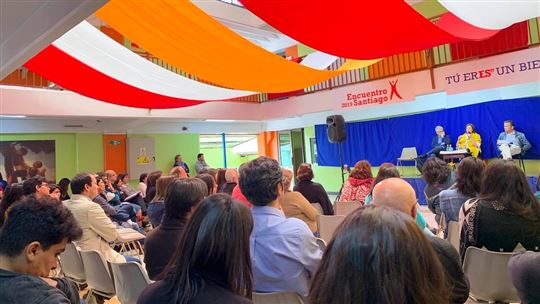 Right after, the second meeting. Since Encuentro Santiago wants to be a place where diversities meet, Fr. Aniceto Norin, lonko (leader) of a Mapuche community- the people who have lived in Chile for millennia and who, even after the waves of colonization, struggle to maintain their traditions - came to speak about himself and his people. Fr. Aniceto lived one of the most dramatic episodes of those experienced in these times of great discussion on the rights of indigenous peoples: the murder of an elderly couple by some Mapuche. For this reason, Aniceto was unjustly accused, he had to pass three levels of judgement that had failed to prove his guilt, but had nevertheless led him to a conviction; a verdict that was obviously political, because it did not take into account the innumerable witnesses who defiled him. He had to deal with the International Court in order to obtain justice.

But this innocence was sealed in the embrace he exchanged with one of the victims' children. It is a gesture that shows not only the possibility of forgiveness between two people, but also the possible unity between two peoples who can understand each other, and live in harmony in the environment that the Mapuche consider most sacred, that is earth. In addition to the awareness of a leader, who lives his leadership as a responsibility: the money he received for compensation (a lot) was used for his community. And it is striking to see, in such a man, a religious sense, an openness, that leads him to try continually to build bridges, to create relationships, inside and outside his people.

At the end of the morning, we read Julián Carrón’s message, who "in this particularly dramatic moment that Chile is experiencing" first of all shows his affinity and then adds: "Like everything that happens, this too is a provocation, an opportunity for your maturation. I hope that Encuentro Santiago might testify that there are people who accept the challenge.”

The day continues with a forum on the end of life and euthanasia, a very topical subject here because of a series of legislative proposals. It’s title: "To love is to say to the other: you cannot die". Sofia Huneus, a lawyer, and doctor Gonzalo Arradiaga, a kinesiologist, deal with the topic from different perspectives. What is at stake is the discovery of what a “worthy death” is, while more often than not, everywhere, euthanasia is proposed as a way to decide for and about yourself. We talk about laws, palliative care, the relationship between doctor and patient, the role of the family. Such a decisive topic, too often prey to ideological prejudices, opens up perspectives. 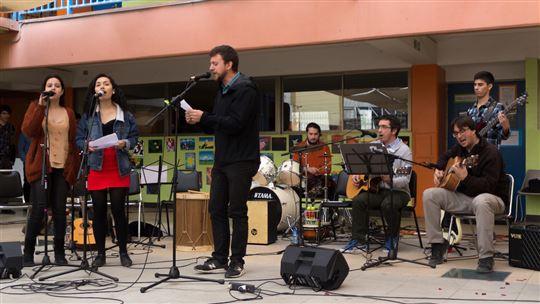 The curfew (removed only at the last possible moment) forced the evening to be cut short. Encuentro begins again the day after, Sunday, with mass. The red t-shirts of the volunteers are mixed with the public. There are even more people have come than in previous years. Two testimonies follow, on the value of sport, on how the discovery of the "good that the other is" is decisive even when the comparison between ourselves and others prevails.

Finally, the exhibition on Job: "Is there anyone who hears to my cry?". It was opened throughout the Encuentro, in the schoolyard, along with the exhibition on Infante’s photographs. And it is the cue for the last meeting, which presents the exhibition, before a guided tour. Its theme is innocent pain and the relationship with God. Lots of open questions, lots of visitors in front of the panels.

Encuentro ends with a moment of music: traditional Latin American songs, as well as some rock ballads. The beauty becomes evident once again. And it's the same beauty that’s on the faces of the volunteers, or in words, like those of Laura, a young girl who had worked so that Encuentro could take place and now says: "I'm happy to have participated in a gesture that is like a hand that builds good for all.” At the end of the day, this was the discovery of Encuentro Santiago: by giving yourself, you can build a good for all.
#OtherMeetings

Encuentro Santiago on the situation in Chile: "Love is stronger!"