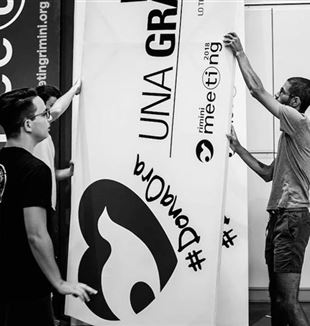 “Awareness of the bond between one’s own personal freedom and the good of the community we belong to is an essential asset of democratic civilization and culture.” Furthermore, “Connecting the search for human happiness with the desire to build a better history for oneself and for others is a great challenge for humanity. Keeping people and stories together really means strengthening the bond between the individual and the community, making sure no one is left behind or feels excluded.” These were the words of the Italian president, Sergio Mattarella, addressed at the Rimini Meeting the day before the inauguration of its 39th edition titled, “The forces that move history are the same that make man happy.” In this phrase spoken by Fr. Giussani in the months following the Italian Sixty-eight, there is no solution to the continuity between every person’s heart and human history. There are no boundaries. The world is our playing field, the present time is our playing field. At the center is man with his desire for happiness.

Everything is ready and today the week-long festival in Rimini opened its doors. The pavilions were already filled with life during the past few weeks thanks to the work of over 400 volunteers, most of them university students, in Rimini to set up the 130 thousand square meters of the venue’s twelve pavilions. Stefano, a forty-five-year-old engineer from Rimini, has been participating in the Meeting’s set-up—the Pre-Meeting—for over twenty years. “This year there were many university students, mostly from Milan and Bologna, but also many ‘workers’ on vacation. There were even four Russian kids.” Some of the more experienced volunteers involved with woodwork even began setting up in early August. However, the vast majority of the work was done last week. “Some were collaborating with the different secretary offices, while about 350 volunteers were placed to set up stands in different areas,” said Stefano, who, for many of the Meeting’s editions, has been assigning work to volunteers according to different necessities. There are also the special teams, which have consolidated into different groups over the years and are sent to resolve all sort of issues. These are “friend groups from various cities. Every year they plan a wild boar dinner together at the end of the week.” 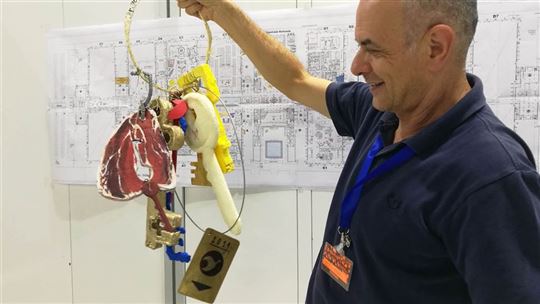 It’s a world: “The president of the Meeting symbolically hands us the ‘keys to the building site’ at the beginning of the week. Every year, a new key made by the volunteers is added to the set of keys. Each key is different. On Saturday, the volunteers have a ceremony and hand him back the keys.” They hand over their work as a place where the Meeting can live. “What does it mean to live the Meeting this way? It’s to participate in that very beauty those coming after you will enjoy. It’s nothing less than that,” added Stefano, who today is resting at the beach with his family after having gifted the Meeting two weeks of his personal time off. “During the year, at work, with your family, in daily life, you always run the risk of chasing after things, of lowering your expectations regarding the possibility of enjoying everything. Here, I work all day for free, and I return full. Happy. Isn’t this related to this year’s title?”

At night, the final touches were made after having welcomed 2,500 additional volunteers. They will all be working until August 25 at stands and exhibits, in the different food courts, and cleaning and ushering. All this so that this year’s meeting may function at its best with its 148 talks, 18 shows, 14 exhibits, and nearly 300 speakers. “More than that, to be exact,” said the president of the Meeting, Sandro Ricci. “This year we created four themed spaces and three large areas, each of those with its own arena to allow for talks on more specific themes.” From Italy’s ’68 to the international scene, from astrophysics to innovation, to areas dedicated to work, movement, and health.

This year, too, we await Pope Francis’ message, which will be read during the mass celebrated by the Bishop of Rimini, Msgr. Francesco Lambiasi. “Each year, the Meeting is a gust of fresh air in the summer heat of the Rimini coast,” said Lambiasi during a presentation. “It is so, thanks to its ability to create dialogue and encounters, even on an international level, and thanks to its emphasis on the centrality of the person.” 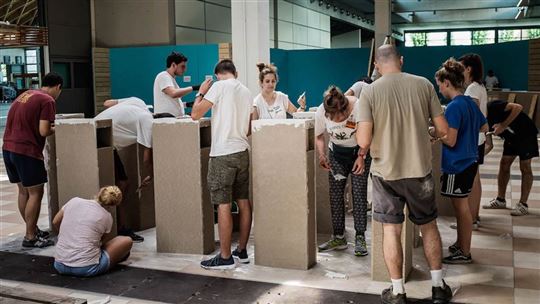 A dense program awaits the Meeting’s thousands of visitors, as we can see from today’s agenda. A talk on the Meeting’s theme featuring the Apostolic Nuncio to the United States, Archbishop Christophe Pierre, will take place at 3:00 p.m. CEST. At 5:00 p.m., the bond between charity and science in the treatment of patients will be explored in a dialogue with Rose Busingye from the Meeting Point International of Kampala, Uganda, Mariella Enoc, president of the Bambin Gesú Pediatric Hospital, Andrea Mariani, from the Mayo Clinic, USA, and Roberto Barnabei, president of Italialongeva. Also at 5:00 p.m. will be the first meeting of the “To Be Italian” series curated by Luciano Violante, President Emeritus of Italy’s Chamber of Deputies. The Bridge of Tiberious, a Roman bridge in the heart of Rimini, will serve as backdrop to Through a Sea of Desire, a performance directed by Otello Cenci and loosely based on Paul Claudel’s The Satin Slipper.

“What forces move history?” Asked Fr. Stefano Alberto at the assembly with the Meeting’s volunteers. “If we look at reality, we could say many things do: whoever is loudest, whoever produces information … Instead, the answer isn’t discourse but experience.” It was a challenge proposed to the kids at the Meeting. “There’s something in us that’s irreducible: our desire. We are made for a good destiny, and it’s in our lives that the spark of a force, an energy, an incredible positivity, can become real.”