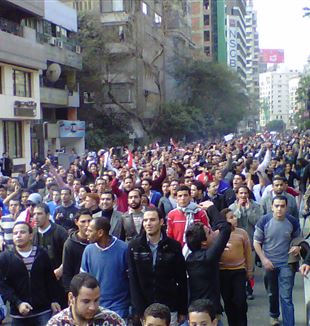 A restless scientific committee is quite a sight. It happens if you put together 50 or so thinkers on a new theme. Few things are certain, nothing taken for granted, a lot of questions are asked, and they in turn bring up more, unexpected questions. So the words of Cardinal Angelo Scola sound like a reassurance at the end of two days' work: "Reality is the finger of God." You must look at where He is pointing, as much as you can, without the hurry to define or to classify but, at the same time, without drawing back from what is happening. And what is happening is a movement that, little by little, is fragmenting the Arab world. This is something completely new, unforeseen, as the title of the annual conference of the scientific committee of the Oasis Foundation indicates: "Where is the Middle East heading? The unforeseen events in North Africa and the new laicism."

Experts on the Islamic world, Christians from the West and from the East, scholars and prelates from America, Europe, and, above all, from various countries of North Africa and the Middle East, came for something more than a meeting: two days of fellowship (June 20th-21st). From morning to evening on an island in the Venetian lagoon, San Servolo, they exchanged views on facts and interpretations in order to understand more incisively the insurrections that, from the streets of Arabia, questioned the world.

If there is one thing that has emerged in these two days of exchanges, it is that these insurrections are a watershed, a point of no return. Not so much for the incidence they have had, leading to the fall of the Tunisian and Egyptian regimes, but chiefly because "revolts became revolutions," as Scola, the President of Oasis, said, citing Augusto del Noce: "The moment of pure revolt is dissociated from the idea of revolution, since the idea of truth is essential to it." And the Arab insurrections, amid economic, political, and social demands, have expressed an idea of man–even if only for the way they were expressed: no ideological trademark, "no affirmation of identity or religious, ethnic, or political belonging," explained Olivier Roy, the political scientist and oriental scholar, "but rather the affirmation of the dignity of the person. For the first time, we have witnessed the use of the word karamat, which is to be translated 'individual dignity,' and not that of 'honor,' which has a collective meaning."

An Idea of Man
This moment of break up, which Roy describes, has one need above all: to be directed; in order not to lose itself, in order "to go on being a revolution" and not remain "a fleeting exceptional moment." The movement in act has to deepen the idea of man and of society toward which it is tending. This inexorably means taking up institutionalized forms, which is the agony of this moment that, according to the participants' analyses and accounts, is in play in the thrust toward a pluralization of society. There is no going back.

This can be seen in many aspects: in the revitalized opposition amongst laicists (ilmânîyyîn) and "Islamists"(islâmîyyîn) in Tunisia, documented by Malika Zeghal, lecturer in contemporary Islamic thought at Harvard; in the moderate platform represented by the main Islamist part in Tunisia, Al-Nadha; in the pressure "of intellectuals and civil society on the 'secularization' of the Muslim Brotherhood in Egypt," which were recounted by the Egyptian political analyst and President of the Arab Forum for Alternatives, Cairo, Amr Elshobaki. There are even signs in Saudi Arabia, as reported by Madawi al Rasheed, lecturer in social anthropology at Kings College, London: "The majority of subjects is more and more intolerant" in a country that is "an oil company managed by a royal dynasty," where the official religion, Wahabbism, coincides with an Islamic fundamentalist movement, and is successfully used with its prohibitions to counter any possibility of protest. "So the wave of real turbulence that infected even Arabia has been absorbed, for now," al Rasheed concluded. These events in various countries of the Middle East are all different signs of one thing. "A process has begun towards an autonomy of the political sphere from the religious," Roy summarized. And thus everything revolves around a single category: "new laicism," or "positive laicism," which is at the center of the Oasis meeting.

Real Mestizaje
To us the term "laicism" conjures up precise attitudes: secularism, marginalizing religion from the public sphere, individualism, etc… But here it is not a question of a formula, but rather a reading of an evident fact: the need that exploded from the North African events to rethink the role of religion in the public place. As Scola recalled, "We Westerners have the duty to put people on their guard against an exasperated search for an individual identity, against secularism, and against the collapse of ties." Because we know the catastrophe of their consequences.

The discussion at the speakers' table went on over lunch and dinner. The strength of their method is to propose a place of encounter, real and thus not neutral, where reflection is as essential as the witness of experience, and where, in the course of the debate, the concept of "religious freedom" became one thing with a clear request. The request was posed by some of the bishops who came from countries in revolt: "Help us to stay where we are, to integrate where God has placed us." Here, there is no remaining in the abstract even over the idea of mestizaje, a provocative category launched by Scola in 2007. "It is not an abstruse word," one of the young organizers said, taking us by surprise. She continued, "Mestizaje is a whole question." And she doesn't need many words, being an Italian and a Catholic with a father who is Turkish and Muslim. "It is an ongoing encounter, that questions, and helps us not to take anything for granted." It is a lens that brings into focus the waves of migration on our coasts, the sub-Saharan populations that are pressing beyond the Maghreb in desperate conditions, the unbalance in development, and the urgency for an intervention more vast and radical than offering hospitality and aid: a structural change in the economic system. Or even better, the "new economic reasoning," called for by Benedict XVI in Deus Caritas Est, which has thus far been little understood. "The need is to introduce the dimension of solidarity, gratuitousness, as constitutive of the economy," Scola explained. It was once again with the Pope's words that, at the end of the two days, Scola re-launched the work of comprehension, which is still only beginning. He quoted a passage from the Holy Father's address to the Church of Northeast Italy: "You live in a context in which Christianity presents itself as the faith that, over the centuries, has accompanied the journey of many peoples, even through persecutions and very severe trials… Yet, today, this belonging to Christ risks being emptied of its truth and of its deeper contents; it risks becoming a horizon that only superficially–and in rather social and cultural aspects–embraces life; it risks being reduced to a Christianity in which the experience of faith in Jesus, crucified and risen, does not illuminate the journey of existence." Scola said he felt "very judged" by these words: "The Pope is saying that the question is, 'What experience do I have of the risen Christ?'"

An Indelible Symptom
Shortly before, Javier Prades, Dean of the San Damaso Theological Faculty, explained this concept. He took, as his point of departure, the unease demonstrated in the European streets (for example, the Indignados in Madrid). He spoke of "a pre-political task" for everyone. Before "such a deep unease, which is there, and which cannot be solved solely by political and social means," the pre-political work lies in interpreting this unease properly. What is this unease about? Prades' hypothesis is clear: "It's always an indelible symptom of that complex of needs and evidences that define every man's elementary experience." For him, this is his religious sense: the need for good, for freedom, and for dignity. And these needs can be recognized in the tension found in the break-up that is currently shaking the Islamic world.

Here we can clarify each person's responsibility, and our responsibility as Christians: make a cultural and educative journey, accept it first of all for yourself… "Check to see if the faith educates the elementary experience," says Prades. It is from the maturation of that experience that an understanding of yourself and knowledge of the other develops the possibility of offering a response worthy of this "infinite desire that has been moved."#MiddleEast