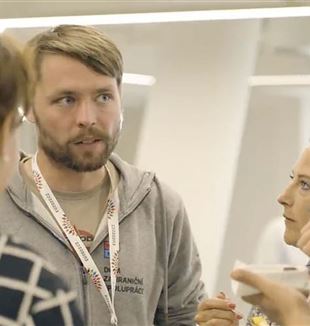 The first Youth Conference for young Europeans, sponsored by the Strasbourg Parliament and held uner the Czech presidency, was held in Prague from July 11 to 13. It was an event in which I was involved at the forefront because I work at the National Pedagogical Institute (NPI) at the Ministry of Education of the Czech Republic. It was three days of meetings and dialogues between two hundred young people from the 27 EU countries and Ukraine, to whom Pope Francis sent a message.
In this context I was able to experience once again what it means to verify the relevance of faith to the demands of life in a concrete way. Few things fill me with more joy, satisfaction and creative enthusiasm as being able to verify this before my own eyes. Not only on a personal level, but also on a social level.

In the fall of 2020, I followed a dialogue online between the secretary of the Congregation for Catholic Education, Monsignor Angelo Zani, and Julián Carrón on his book Education. Communicating One’s self as a contribution to the Global Educational Pact launched by the Pope. That exchange between Zani and Carrón struck me so much that I went from Brno, where I live, to Prague to tell a friend about it, who had just joined the NPI management. He, who I would call a "humble atheist," and his deputy listened to me and asked questions for two hours. The more I recounted, the more it emerged that Francis' priorities on education were the same as theirs in designing a reform. "So it was the Pope who sent you to help us!" they exclaimed, smiling. We kept in touch and in the meantime I went through the selection process to join NPI myself, following my desire to remain faithful to that encounter and intuition, and to explore them more deeply. I was put in charge of international relations and one of the Institute's regional offices. 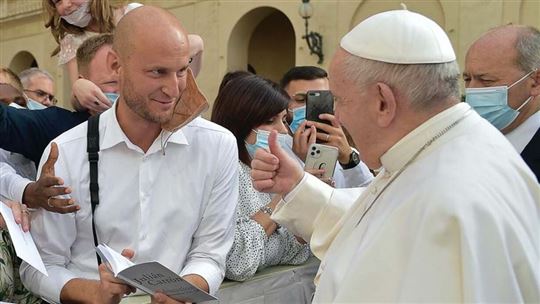 At that time, the Czech Presidency's turn at the EU Council was approaching. After a dialogue with Carrón and other friends, I managed to organize a trip to Italy with my bosses, who were able to visit some realities born from the experience of the movement (Cometa, the Sacro Cuore Foundation, CdO Educative...) and meet people working in education.
During that trip we also met with the Pope, to whom I presented the idea of being able to deepen his Global Educational Pact at the most important event of the Czech Presidency at the EU Council in the field of education and youth, during the second half of 2022. "You are doing well," the Holy Father told us. We also met with Zani, who helped us understand even better the interreligious background of the Pact and promised to promote our initiative.

Given the clip nature of today's youth, we asked the Pope for a short video message. However, on the eve of the event, Francis decided to write an unexpectedly long, personal, carefully structured and motivational letter to young Europeans. The young people were impressed: Francis touched on their desires and expectations, to such an extent that it seemed to anticipate what they would experience during those days. It was the first in person meeting of young Europeans since the pandemic.

“You are attentive young people, less ideologized, accustomed to studying in other European countries, open to volunteering and sensitive to environmental issues. This is why I feel there is hope," the Pope wrote, knowing that so many of them during the pandemic had engaged in volunteer work for those in need: "Seeing, however, how our world is being led by adults and elders, it seems that perhaps you should be the ones to educate adults in fraternity and peaceful coexistence! Make your voices heard! If they do not listen to you, shout even louder, make noise; you have every right to have your say on what concerns your future. I encourage you to be enterprising, creative and critical.”

These words became embodied in the various group work that took place over the three days, especially in relation to two themes. The first was inclusion, as Francis wrote in his letter: "Be open to acceptance, and hence to the value of inclusion. Don’t let yourselves be drawn into short-sighted ideologies that want to show others, those who are different from ourselves, as enemies. Others are an asset." He invited us to go back to Fratelli Tutti and the Document on Human Fraternity signed together with the Grand Imam of Al-Azhar, stressing the need for education "not only to 'know oneself' but also to know others."

The second area of focus, also highlighted by Francis, concerned sustainability and the environment: "Have that ‘broad outlook’ that can take in all the rest of humanity, which is much bigger than our little continent. May you aspire to a life of dignity and sobriety, without luxury and waste, so that everyone in our world can enjoy a dignified existence.”

The special guests at the conference were members of the Ukrainian delegation, whose presence also inspired ideas for the next conference, which is already being organized by Sweden, with a special focus on the Pope's appeal on the link between peace and education in fraternity: "In Ukraine – which is not in the EU, but is Europe – a senseless war is being fought. Added to the numerous conflicts taking place in different regions of the world, it makes the need for an educational pact that educates everyone to fraternity all the more urgent. In cases like this, it is legitimate to rebel!" Francis affirmed, pointing to the examples of Blessed Franz Jägerstätter and Protestant theologian Dietrich Bonhöffer, who were martyred for refusing to participate in Nazi terror.

Read also - Meeting 2022: Performances, beauty, and the dialogue between worlds

"Dear young Europeans, I invite you to look upwards and beyond, to keep seeking the real meaning of your life, where you come from and where you are going, and the Truth, because we cannot live authentically if we do not seek the Truth. Walk with your feet firmly planted on the earth, by with a broad gaze, open to the horizon, open to the sky," the Pope continued, "May you be generative young people, capable of generating new ideas, new visions of the world, of the economy, of politics, of social coexistence, but above all of new paths to be travelled together. And may you also be generous in generating new lives, always and only as the fruit of love! The love of husband and wife, the love of family and children, but also love of Europe, so that it can be for everyone a land of peace, freedom and dignity."