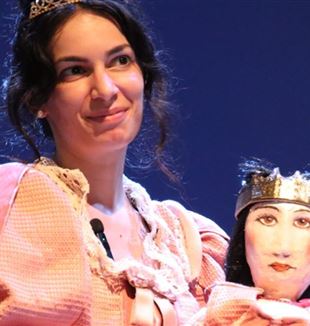 The program of this summer's Rimini Meeting (August 20-25) entitled "A passion for the person" is rich. This title is also the common thread linking all the performances organized for this edition. "Theater, music, cinema and dance have always found a home at the Meeting, because of their ability to recount the story of beauty and to put very different worlds and people in dialogue," says Otello Cenci, director and artistic director of the Meeting.

The shows
"This year we are staging Liberi tutti, a show produced together with the Centro Teatrale Bresciano and the Chesterton Institute in New York. The work was inspired by a beautiful text by Chesterton, The Surprise, which was born in a way as a response to Pirandello and his Six Characters in Search of an Author. But it is also a tribute to Pasolini and one of his 1968 short films, Cosa sono le nuvole [What are clouds?] (starring Totò, Franco Franchi, Ciccio Ingrassia and Ninetto Davoli). These two authors were able to say better than anyone else what moves man when he seeks for the meaning of his existence, risking all his freedom to find it. I am happy because the six performers selected are young actors, musicians and singers of great talent who will bring to the stage a fun and profound show, proposing an immense wealth of expressive solutions."

The week's schedule is packed. There will also be a show by Giovanni Scifoni's entitled Anche i santi hanno i brufoli [Even saints have pimples] and another by storyteller Roberto Mercadini entitled Leonardo e Michelangelo, due passioni per l’uomo [Leonardo and Michelangelo, Two Passions for Man]. "Both find irony an effective mode of storytelling. Mercadini, for example, manages to compare two geniuses of history with opposing points of view, while Scifoni shows us the human face of the saints to remind us that God often chose men of little talent to accomplish great feats, thus offering a clear testimony of Him."

Then there will also be a number of film screenings, such as Marylin Has Black Eyes (with Stefano Accorsi and Miriam Leone) and Ariaferma (with Toni Servillo and Silvio Orlando,) which recounts a unique sequence of events that leads to prison guards and prisoners having to work together. We must specially mention La Sorpresa [The Surprise], the exceptional story of Father Marella, a much desired docu-film by Cardinal Matteo Maria Zuppi, starring Stefano Abbati, in which more than 350 young film enthusiasts from all over Emilia Romagna have participated. "It speaks of the humanity of this priest originally from the Veneto region who in Italy's darkest years was also and above all a safe haven for the weakest and who founded the Città dei Ragazzi in Bologna."

Music
This year music will once against feature prominently. On August 21 there will be a performance by the Sinopoli Youth Orchestra, conducted by Carla Delfrate, with the famous cellist Giovanni Sollima as guest soloist. "The ensemble is made up of 14- to 24-year-olds who come from difficult family backgrounds, who have been proposed the ‘Abreu’ musical instruction method, born in the Venezuelan favelas more than 40 years ago," Cenci explains. "The basic idea is that music should be accessible to everyone - no matter someone’s background and education - and that playing together is a privileged way to learn how to communicate and relate to others. This orchestra is living proof of what 'a passion for the person' means."

Read also - Exhibitions at the Meeting 2022: the crack and the passion

During the week there will also be two “Spirto Gentil” [The opera arias and the responsories of De Victoria] listening sessions, and the performances of the eight finalists of the Meeting Music Contest, designed to introduce new musicians and bands from all over Italy.

The Meeting's final party will be a concert whose proceeds will go to support the projects of the AVSI Foundation. It will be an evening dedicated to Claudio Chieffo, a singer-songwriter and great friend of the Meeting who died 15 years ago. His two sons, Benedetto and Martino, will be on stage performing his songs, joined by famous artists such as Omar Pedrini, Mirna Kassis and Marketa Irglova, Oscar winner for the song Falling Slowly.#Meeting2022