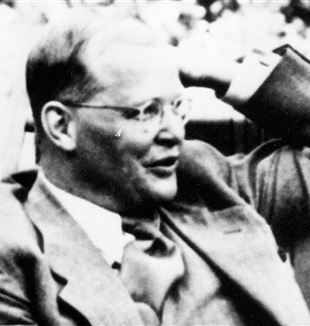 My time is always full, but from the morning to the evening, deep down, there is expectancy. These words resounded during the last Exercises of the Fraternity of CL, testifying how "expectant waiting is so constitutive for our ‘I’ that not even the ugliest, most painful, most contradictory situations can eliminate it entirely,” said Fr. Julián Carrón. "Even in circumstances where there would be every reason to give up this expectancy, we have testimony of it.”

The writer is Dietrich Bonhoeffer, from Berlin's Tegel prison, where he was imprisoned from 1943 to 1945 and then hanged. The theologian of "costly grace", a thinker opposed to the idea of a "stopgap God", a master in the art of living community life, he was above all a great witness of faith in the dark age of Nazism, decisively choosing Christ, which led him to literally give his life.

A Lutheran theologian, son of a middle-class family, born in 1906, the sixth of eight children, Bonhoeffer studied theology in Berlin and was ordained pastor of the Evangelical Church in 1931. Already at the first signs of the establishment of the Nazi regime, he perceived the danger of Adolf Hitler's project: in 1933 he delivered his lecture The Church and the Jewish Question, in which he denounced the anti-Semitic nature of the Reich. Faced with the risk of anti-Semitism becoming a "new religion", Bonhoeffer called Christians to an active task: "The Church has the unconditional obligation to the victims of any ordering of society, even if they do not belong to the Christian community. The third possibility is not just to bandage the victims under the wheel, but to put a spoke in the wheel itself.” Christians, therefore, are not only those who heal the wounds and the injured in the world, but those who with their very lives prevent the future of evil (we are in 1933!).

Highly symptomatic of how much Bonhoeffer had understood the true nature of Hitler's regime is the fact that exactly the day after Hitler was sworn in as Chancellor in Berlin (30 January 1933), Bonhoeffer himself (whom Pope Francis described as "a great Protestant theologian and martyr") wrote these words: "The State can also assume the form of the evil. It can be and do the greatest possible evil". Together with other members of the Evangelical Church, Bonhoeffer soon developed the idea of a "confessing" Evangelical Church, that is, one that would not blindly put itself at the service of Nazi ideology, but would retain its own independence of judgement.

And this vision of independence began to cost the evangelical theologian dearly. Already on 18 July 1933 he was summoned by the Gestapo, which immediately sensed his strong opposition to the dictatorial regime that was taking shape in Germany. On 5 August 1936 his permission to teach at university was withdrawn, he who had a very strong influence upon young people. This is testified by the beautiful Life Together, a sublime text that collects his teachings addressed to the seminarians of Finkewald, near Szczecin, where the future pastors of the Confessing Church were trained (it was closed in 1937 on Himmler's precise orders). When in 1939 he was on the road to the United States, Bonhoeffer immediately realised that his place was to return to his homeland. He took the last available ticket to Europe, and during the first years of the war was one of the secret leaders of an attempt to overturn Hitler's regime, even resorting to an assassination attempt against the Führer, which was foiled. Arrested on 5 April 1943, he was imprisoned in Tegel Prison, where he remained until 9 April 1945, when - on Hitler's direct orders - he was hanged.

It was precisely during his years of imprisonment in Tegel that he kept up a dense network of correspondence, in particular with his family and with his friend - and later biographer - Eberhard Betghe. This correspondence in the following years became a very successful book of theology, Resistance and Submission in which Bonhoeffer, in a rhapsodic but profound and motivated way, formulates the proposal of Christianity in a world that has become "adult". He strongly denounces Christianity that is "on the defensive" in the face of modernity, as if faith were to become a remedy for the harshness of history. Let us listen to him: "It is wrong to say that God fills the emptiness. God in no way fills it but much more leaves it precisely unfilled and thus helps us preserve – even in pain – the authentic relationship.” Bonhoeffer, who is genuinely sensitive to his own time, manages to grasp the glimmer of a society such as the European one in which God becomes an unnecessary hypothesis: "What do a church, a community, a sermon, a liturgy, a Christian life mean in a religionless world? How do we speak of God – without religion, that is without the temporally conditioned presuppositions of metaphysics, inwardness, and so on?” Bonhoeffer's is a faith, therefore, that does not want to spring from a "less human" but from a "more than human", not as a consolation in the face of the narrowness of experience but as a springing forth of grace and redemption. Hence his critique of the idea of God as a stopgap: "How wrong it is to use God as a stop-gap for the incompleteness of our knowledge. If in fact the frontiers of knowledge are being pushed further and further back – and that is bound to be the case – then God is being pushed back with them, and is therefore continually in retreat. We are to find God in what we know, not in what we do not know.”

What does adherence to Christ and the refusal to recognise any other Leader than the Crucified One, rejecting the idea of a stopgap God, mean to him as an imprisoned person? Again from Resistance and Submission: "We must recognize God not only where we reach the limits of our possibilities. God wants to be recognized in the midst of our lives, in life and not only in dying, in health and strength and not only in suffering, in action and not only in sin. God is the center of life.” The Christocentric character of Bonhoeffer's theological proposal is also the pivotal point of his existence: the humanity of Christ becomes the building stone of the Christian ideal.