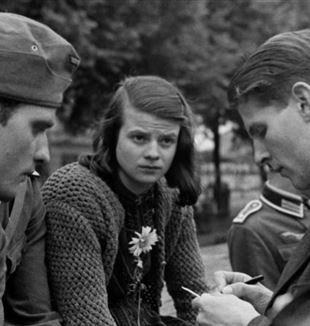 Sophie Scholl, the fourth of six children, was born on May 9, 1921 in Forchtenberg, into an evangelical family, and then moved to Ulm at the age of twelve. Her father opposed National Socialism from the very beginning, so much so that his children remember him reciting Goethe's verses every morning in front of the mirror: "Always resist / the opposing forces; / never bend, / be firm, / summoning the help / of the divine".

Despite her father's opposition, Sophie’s idealistic impetus and boundless love for Germany led her, along with her siblings, to participate enthusiastically in Hitler's Youth. Soon, however, the contradictions of the ideology became unbearable for her: "Why can’t Luise, with her fair hair and blue eyes, be a member of the Bdm (female branch of the Hitlerjugend), while I with my dark hair and dark eyes am a member”, she asked herself when a Jewish friend was expelled. Thus, following her brother Hans's abandonment of the Hitler Youth, Sophie also increasingly distanced herself from National Socialism.

From that moment on, she never stopped questioning what she saw happening around her, reaching lucid considerations about the reality that surrounds her. Friendships, reading, drawing, listening to music and passion for nature were key ingredients in keeping the heart of this young girl alive, forced, despite everything, to submit to the duties of a regime whose ideals she did not share. It is in some of the letters addressed to her boyfriend Fritz Hartnagel, enlisted as a second lieutenant in the German army, that her desire for truth emerges most clearly. This desire was the hallmark of Sophie and the other members of the White Rose (Weiße Rose), the secret group of students who chose to make their voices heard amid the German people’s fear and indifference towards the dictatorship. 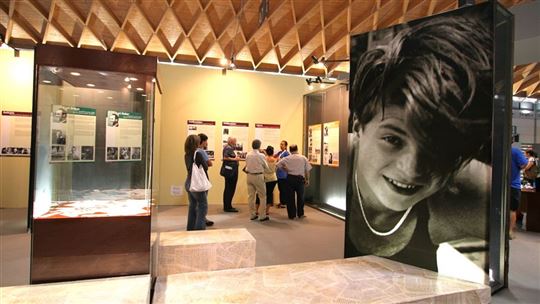 Sophie writes to Fritz: "Although I don't understand much about politics, and I don't even have the ambition to understand it, I do have a little sense of what is right and what is wrong, because this has nothing to do with politics and nationality. " (May 29, 1940). In spite of the prevailing propaganda, the girl was able to recognize the falsehood of the war that had just broken out: "I just can’t grasp that people’s lives are now under constant threat from other people. I’ll never understand it, and I find it terrible. Don’t go telling me it’s for the Fatherland’s sake” (September 5, 1939). In the midst of the horror of war, the beauty of nature, which stubbornly continues to be reborn in spite of the atrocities of men, will be a source of comfort and hope for Sophie: "There are two roses on my bedside table. (...) What a pure and beautiful sight (...) To think that it exists. That trees simple go on growing, and grain and flowers, and that hydrogen and oxygen have combined to form such wonderful, tepid drops of summer rain: sometimes I become aware of all this in such a powerful way, that I am totally pervaded by it, without leaving room for a single thought. All this exists, despite the fact that man behaves in such an inhuman way in the midst of creation; in such a way that cannot even be qualified as animal. Even the fact that all this exists is an immense grace!" (June 17, 1940).

Eventually, in May 1942, Sophie found relationships in which to share her questions, when she moved to Munich to enrol in the Faculty of Philosophy and Biology. There, her brother Hans, having enrolled to study Medicine in 1939, introduced her to a circle of friends, including Alexander Schmorell, Christoph Probst, Willi Graf and Professor Kurt Huber, with whom they shared evenings of music, readings and a profound friendship. Furthermore, their acquaintance with the Catholic publicist Carl Muth and the convert Theodor Haecker, translator of some of Newman's works, exerted a great human influence upon the young people and marked the deepening of a religious search that would accompany Sophie and Hans during the last years of their lives.

During those months, the need to be true to oneself began to take root with increasing conviction; of not giving in, as Hannah Arendt would say, to that "everpresent possibility for everybody (...) to shun that intercourse with oneself" (from Thinking and Moral Considerations). At the end of May 1942, after her first weeks in Munich in the company of her new friends, Sophie wrote to her friend Lisa: "I feel the urge to realize, through action, what has been inside me only as thoughts and recognized as the right thing." (30th May 1942).

It is in the context of this friendship that the first four leaflets signed "the White Rose", written by Hans and Alex, were secretly circulated. Their purpose was to awaken the conscience of the German people, putting the absurdity of a war that was a massacre before everyone's eyes: "We will not be silent. We are the voice of your bad conscience. The White Rose will not leave you in peace," reads the fourth leaflet. It is a dramatic experience, because their love for the German people, reaffirmed to the point of death, paradoxically led them to side with the defeat of Germany. On the other hand, loyalty to one's own people cannot be at the expense of justice and truth, as Sophie wrote to Fritz in a letter in 1940: "For me the relationship between a soldier and his people is roughly like that of a son who swears to stand by his father and his family through thick and thin. If it turns out that the father harms another family and then gets hurt as a consequence, must the son still stick by him? I can't accept it. Justice is more important than sentimental loyalty" (September 23, 1940).

Sophie, so reluctant to form superficial friendships, immediately recognizes true friends within the Munich group, so much so that, on the occasion of their departure for the Russian front, she wrote to Lisa: "Last week Hans went to Russia with all the others, those who in the course of the last months and weeks have become my friends. (...) I would have never believed to be so close to all of them, especially to Hans" (July 27, 1942).

Upon her return from service in Russia, Sophie, who had discovered the identity of the leaflet writers, also actively joined the group, until she was arrested on the morning of March 18, 1943, when she was discovered by a janitor while distributing copies of the sixth leaflet with her brother Hans at the University of Munich. Within only five days Sophie, together with her brother Hans and Christopher Probst, were sentenced to death for high treason and executed. Even their interrogation, well represented in Marc Rothemund’s film The White Rose (2005), gives us the image of a simple girl who was faithful to her heart, able to recognize the truth even under the rubble of National Socialism. Faithfulness to her own conscience is the common thread that emerges during her interrogation with Robert Mohr, the magistrate appointed by the Gestapo for the investigation; conscience without which - as Romano Guardini recalled in a commemoration speech for the White Rose in 1958 - there is no freedom. Following them, Alexander Schmorell, Willi Graf and Professor Kurt Huber were also sentenced to death and many other people involved with the group were arrested.

Was their attempt thus in vain? One could answer with the words of George Eliot, which close Terrence Malick's latest masterpiece, A Hidden Life (2020), inspired by the events of Austrian farmer Franz Jägerstätter, who was also executed by the Nazi regime for his attachment to the truth: "The growing good of the world is partly dependent on unhistoric acts; and that things are not so ill with you and me as they might have been, is half owing to the number who lived faithfully a hidden life, and rest in unvisited tombs."