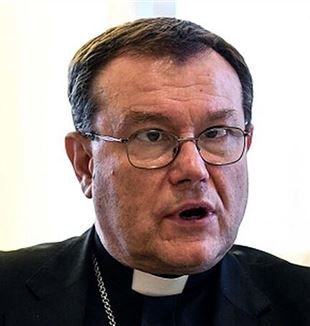 Beloved brothers and sisters in the Lord,
members of the clergy, monks and laity,
The strife in Ukraine has degenerated into a large-scale armed conflict, which has already claimed thousands of lives, undermining the trust and unity among nations and peoples, and which also threatens the existence of the whole world. As we did six months ago, we wish to reiterate the Magisterium of the Church, according to the Holy Gospel and ancient Tradition: war has never been and never will be a means of solving problems between nations; "Nothing is lost with peace, everything can be lost with war" (Pius XII, 1939).

Today our hearts are filled with sorrow and helplessness because of the inability to do anything or even just find the right words that can change the situation decisively and avoid further casualties. Together, brothers and sisters, let us listen carefully to the words of the Holy Father, spoken on the occasion of his visit to Kazakhstan: "May we never grow accustomed to war, or resigned to its inevitability. Let us come to the aid of those who suffer and insist that genuine efforts be made to achieve peace. The one solution is peace and the only way to arrive at peace is through dialogue."

Aware of our helplessness, let us ask to live according to the spirit of Pope Francis’ consecration of Ukraine and Russia to the Immaculate Heart of Mary, with full trust in God's care for his children and in his infinite mercy. The only way to live like this is to be humble peacemakers and defenders of justice, insofar as our talents and the circumstances of our lives allow us to do so.

The partial mobilization proclaimed in Russia has placed many of our faithful before a very serious moral choice. We know that in certain circumstances state authorities not only have the right, but must also use arms and require citizens to perform the duties necessary for the defense of the homeland; and that those who righteously perform military service for the homeland serve the common good. All this is true if military actions seek the fast conclusion of the conflict and to avoid the multiplication of casualties (See Catechism of the Catholic Church 2307-2317).
Ultimately, the question of whether it is permissible to participate in acts of war is a matter of personal conscience, which is man's most secret and sacred sanctuary, where he is alone with God, and whose certain judgment he is always bound to obey (ibid., 1795, 1800).

On the other hand, the Church reminds state authorities that they "should make equitable provision for those who for reasons of conscience refuse to bear arms; these are nonetheless obliged to serve the human community in some other way” (ibid., 2311). This right is sanctioned in Article 59, paragraph 3, of the Russian Federation Constitution, and we call for its consistent observance.
As for the clergy and monks of the Catholic Church, it should be noted that it is categorically impossible for them to participate in hostilities, both according to the ancient rules of the Church and according to the current international conventions.

We renew our call to all our faithful to intensify their prayers and fasting for a just and secure peace. Priests are invited to celebrate Holy Mass for the maintenance of peace and justice, using the Eucharistic Prayer for Reconciliation, reciting the prayer from the Liturgical Office "On Peace and the Homeland," and including petitions for the end of military actions and the safeguarding of human life in the Prayer of the Faithful.

*Metropolitan Archbishop of the Mother of God in Moscow.
On behalf of the Conference of Catholic Bishops in Russia#forpeace