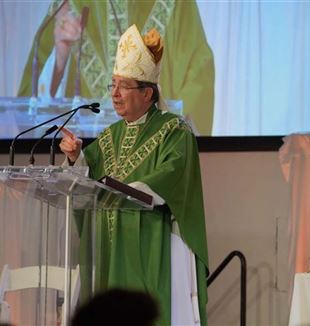 As the Apostolic Nuncio, the Holy Father's representative to the United States, I greet you in his name and express His Holiness' spiritual closeness and paternal affection for you as you gather for the New York Encounter. It is a privilege to be with you, and I want to thank Olivetta Danese for her kind invitation. It is good for us to encounter one another in person to remember Fr. Luigi Giussani, not only as the seventeenth anniversary of his death approaches but also as we celebrate this year the centenary of his birth.

Today in our Gospel, we have a part of St. Luke's Gospel which corresponds to St. Matthew's "Sermon on the Mount." Here we are presented with some of the most difficult teachings of Christ or rather "expectations" that Christ has for His disciples: love your enemies; do good to those who hurt you; turn the other cheek; lend without any expectation of repayment; stop judging; stop condemning.

Although the Golden Rule - do unto others as you would have them do unto you - seems reasonable, the others are quite challenging, yet they can be lived by someone who has encountered Jesus Christ and who has faith in Christ.

What is faith? As Giussani said to university students at the Spiritual Exercises for Communion and Liberation University students in 1976, and as you heard during last year's Beginning Day: "... self-awareness is faith... Faith is recognizing His presence... This is faith. And this is self-awareness, the awareness of myself. The more I resurrect in every hour, throughout my day, the awareness of this Presence who makes everything... the more I return to the awareness of Your presence, O Christ, the more powerful my identity will be, the deeper my tenderness toward myself and Your mercy toward me will be, and the more powerful my creativity in relationship with others will be!"

Each of us first heard the call to be a disciple of Christ. We were attracted by His original Presence. His words resonated with the desire of our hearts, and by the power of His Spirit, He drew us into a companionship of believers. Nevertheless, to live His difficult words and expectations, to express our faith in Him, we need to constantly be aware of His Presence. From the original call to follow Him, we need to mature and to mature we need to recognize a master, a teacher.

It is this new vision of self and of the world that Christ offers. His expectations are novel; they bring a newness to our world, and they help to build a culture of encounter, a key them of Fr. Giussani's thought. I have quoted to you before, the line from Deus Caritas Est of Benedict XVI, which Pope Francis never ceases to repeat, "Being a Christian is not the result of an ethical choice or a lofty idea, but is the result of an encounter with an Event or a Person, who opens up new horizons and gives our life a decisive direction." (cf. Benedict XVI, Encyclical Letter Deus Caritas Est, 1)

It seems to me that this is part of the task and charism of Communion and Liberation in the United States: to build a culture of an encounter with Christ and His Church. Christ is everything, but He is not simply an idea. He shows Himself through the experience of an encounter with the Church that is present in my life, and not only in my life but in the companionship of believers; thus, Fr. Giussani could say, "You cannot follow Christ, understand Christ, and be true to Christ, if not together. The idea had not yet come clear that we are one thing because we are the same thing interiorly, that because of Baptism - from within - we are no longer strangers... the Church means a oneness of persons, the unity of people."

Christ, after all, asked two companions - Andrew and John - What are you looking for? He invited them together to come and see. Andrew, in turn, invited His brother, Simon Peter, to follow the Messiah, and so this companionship was born and continues even to this day. Jesus opened their eyes to a new reality - a new way of looking at the world, one that was transformative. Unfortunately, modern man finds himself trapped within himself, unable to escape himself or the ideologies that surround him. Our world suffers from fragmentation and polarization, and this is making it increasingly difficult to transmit the faith and to transform the culture with
the values of today's Gospel. 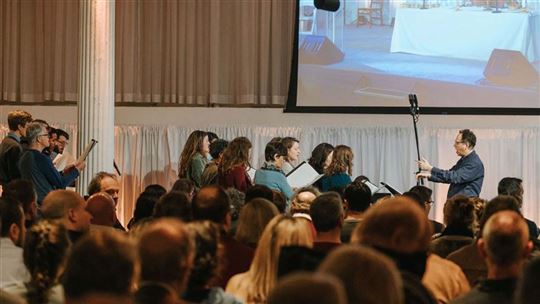 If we reflect on the First Reading, we might ask ourselves whether, if we were in the position of David, whether we would seek revenge on Saul, who had harmed us or whether we would show mercy? Pope Francis reminds us that mercy cannot be a parenthesis in the life of the Church; he invites us to be part of the revolution of tenderness, but this means having a change of mind and heart. This type of conversion, of course, begins with ourselves but must also be transmitted to others. The Church is called to be a Church of Mercy. It is not a club. It is a companionship of believers, a Church of witnesses to the transformative encounter with Christ.

We who have encountered Christ and the tenderness of His mercy are called to transmit to the world this new vision, and this means educating the world. Education is one of the great contributions of Father Giussani. It means to lead out, to draw forth a question. Giussani wanted to train the mind to think critically, not simply to be told what to do or what the right answers are, but to train the mind to ask the right questions. One cannot give a response if the question is never asked. If the right question is never asked, then typically the answer to the questions and problems of life are transformed into an ideology, into a patrimony of ideas without roots. This is the antithesis of Christian faith.

What then is the educational contribution that Giussani offers the Church? It is nicely summarized in his biography: "An education is true if it succeeds in raising up people who can prove themselves in the world, able on their own to stand before the commitments and difficulties they will meet in society. Education must tend to create people capable of affirming themselves within their environment, capable of getting involved with it, and capable of having an influence upon it."

It was not enough to give good example, he continued, for "the isolated Christian either ends up making an orderly retreat because he feels his own smallness in front of widespread evil and general carelessness... or as time goes by, he begins to absorb the poison of the environment almost without even knowing it." (The Life of Luigi Giussani, 213)

Fr. Carrón, shortly before his resignation, and Davide Prosperi have invited members of the movement to accept responsibility for the charism of Communion and Liberation. Many of you encountered the movement in Italy and knew Fr. Giussani, but now you find yourselves having to raise your families in this environment, in this changed and changing culture. Others encountered the movement here. What is the newness it brought to your life? What does Giussani's educational proposal offer here and now?

The method of Fr. Giussani, it seems to me, helps us to get to the root of the problems and questions facing the Church in the United States: the question of faith. It is a method which helps us to see and to embrace reality and which corresponds to our desire, to our urge for the Truth, which ultimately is an encounter with the person of Christ. It is a charism, a gift, that must be put at the service of the Church.#100Initiatives