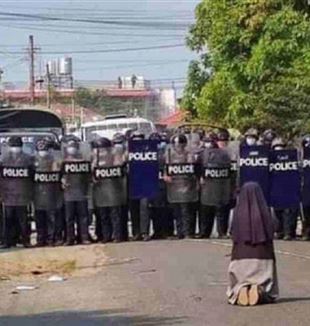 "Kill me, not the people," Sister Ann Rose Nu Thawng told the soldiers. Exactly one year ago, on February 1, 2021, the military took power in Myanmar. In the midst of the turmoil, this photo was taken of a nun kneeling in front of the armed military, and it went viral around the world. Sister Ann belongs to the order of St. Francis Xavier; she lives and works as a nurse in a country that only a few people are able to point out on a map, and has been named by the BBC among its 100 women of 2021. We asked her what provoked that gesture, and what is happening a year later.

One year ago, on February 1, 2021, Myanmar suffered a coup d'état: what is the situation today?
The political scene in which we find ourselves is difficult to describe. We can say, after one year, that a group of soldiers has plunged our country into darkness. There is no more security, people are living in fear and the situation is getting worse and worse. Every day we pray for peace and freedom, but the army continues to kill civilians. After the first months of peaceful protest, young people left their homes and went to fight. Thus, families are breaking up. Many people have been forced to leave their homes because of the clashes between the military and the armies of the ethnic communities. Even some churches have been burned and several priests have had to flee. A new fact we witnessed was to see the different ethnic groups - living in the most peripheral areas of the country - rebel and unite among themselves. Before, people in the capital did not know what was going on in the suburbs. People now finally understand the situation of ethnic minorities who have been fighting the government for decades. 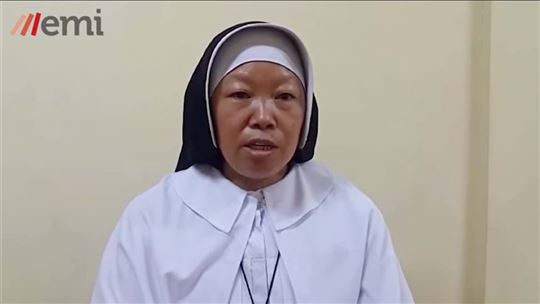 What about the health situation?
Some doctors and nurses were killed, others were imprisoned. I continued to deliver babies, going into homes at night until we were forbidden to go out. I stayed in the clinic for two months, practically shielding. Because of the civil war and Covid, daily life has definitely become more complicated for most people. Many people are suffering from physical illnesses, just as many are suffering from mental illnesses. Children cannot go to school and this is another fact that complicates things. Young people have also been forced to get married without being able to have celebrations of any kind. The trouble is that there is no prospect of a solution. Chaos prevails.

And how are you?
I continue to work in our hospital. My superiors have asked me not to take to the streets to protest anymore, for security reasons. Soldiers and policemen often have to come to check inpatient records and ask about them. But I am not afraid, I recognize in me the presence of the Lord who supports and protects me. I, too, contracted Covid, during the second wave, but I didn't stop caring for people; wearing safety gear, I tried to assist those who needed it most, especially by providing oxygen to those who were worse off, trying as I could to get into homes. It was difficult to work, because of the heat and humidity, with all the protective equipment, but I always felt that the Lord was with me.

Covid and the Civil War. What has your experience been of the past few months?
It has been a hard time. In the past few months, due to the shortage of doctors and nurses, many pregnant women came to us. In just a few months I've helped many women give birth; I've delivered more than 60 babies myself, 30 of them in September alone. Lacking doctors, I took on heavy responsibilities; I asked the Lord to help me, even more so during the most complicated deliveries or when I had to use a scalpel. With the money that came in from benefactors, we were able to build a small delivery room in an area of the clinic.

On March 17, at the General Audience, the Pope said, "Even I kneel on the streets of Myanmar and say: stop the violence.” Do people in your country today feel the closeness of the Holy Father and the Church?
All the people of Myanmar were very touched by the Pope's words, a sign of his love for these people. Francis feels the pain of the Burmese people as if it were his own and expresses closeness and attention. I thank him for this from the bottom of my heart. His prayer has struck a chord even outside the borders of Myanmar and thanks to him we are talking about the situation in our country. We need the help of other countries to resume, one day, life and normality. We are grateful also to Italy that has been close in various ways.

How did you receive the news that the BBC included you among its 100 women of the year 2021?
The news surprised me, even frightened me. But then I thought that I am just a simple instrument through which God works. He has given each of us a talent, the important thing is to use it for good.

Can you tell us about how your vocation began?
I have a memory from when I was a child: during the Way of the Cross in church I was deeply moved by the bleeding wounds of Jesus. They made me weep and, at the same time, gave rise to a sense of gratitude for the One who, out of His own love, gave His life for us and for all people. Following in His footsteps, I too decided to give myself for others. My vocation as a religious of the Sisters of St. Francis Xavier was born when, in my home village on the border between Shan and Kachin States in northern Myanmar, I realized that there were no sisters working in pastoral care. I entered the novitiate in Pathein, in the south of the country. I then interned as a nurse in Yangon and worked for a year in a private hospital run by Muslims. After returning to Pathein, I undertook a five-year training course that led to my religious profession. I went on to study for a doctorate in Psychology. And for the last thirteen years I have been working as a nurse in the diocesan clinic of Myitkyina, capital of Kachin State.

What is hope for you? Where do you glimpse it?
A person without hope cannot do anything, their life is meaningless, it becomes arid. That is why we never forget the Lord and we beg Our Lady to overcome difficulties. In every moment, I ask the Lord how to face life and reality with hope. God created everyone for good, so He will never leave us. Even those who make mistakes, if they return repenting, will be welcomed by God, who is the Father of mercy. Here there are those who do not think of the good of the people, but only of their own interests: let us pray for them. We cannot win with weapons, but we can do it with prayer and the Lord's help. Another thing that gives me hope is to see that, while before there was hostility between one ethnic community and another, even between religions, instead we are now experiencing a path of unity, which can become the path to victory over weapons.

(Contributed to by Sister Margaret Htu Hkawng and Gerolamo Fazzini, who curated the book-interview "Uccidete me, non la gente" [Kill me, not the people])