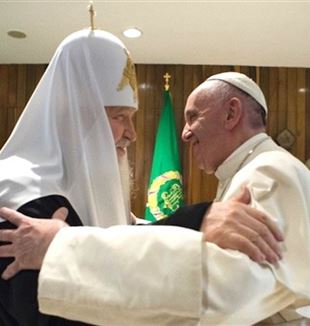 Five years after the historic meeting that took place at Havana airport between Pope Francis and the Russian Orthodox Patriarch Kirill on February 12, 2016, can we talk about the fruits generated by that gesture and by the "Joint Declaration" that both signed, particularly its relevance today, in the face of the dramatic challenges that today not only question believers but all civilization?

These questions were answered on Friday, February 19, during a roundtable organized by the Library of the Spirit Cultural Center in Moscow, by some leading figures from the Catholic and Orthodox Russian spheres.

In his opening greetings, the Apostolic Nuncio Giovanni D'Aniello underlined two aspects of the meeting in Cuba which were then repeated several times by the other participants: "The first concerns the meeting itself. You cannot know yourself without meeting. Meeting allows an awareness that if there is good will and good intentions as there were in Havana, then it will give rise to esteem, trust and collaboration. The second aspect is related to two expressions used by the patriarch and the pope in their brief address after the signing of the Declaration. "Patriarch Kirill used the expression 'working together,'" recalled Monsignor D'Aniello, "While Pope Francis said that 'unity is made by walking'. To work and walk, together, so that we can give hope to a world that today, due to Covid, feels disoriented, afraid; to work and walk together so that we can, with joy, meet as brothers in the Christian faith and, as the Joint Declaration says, “‘to speak face to face’, from heart to heart, to discuss the mutual relations between the Churches, the crucial problems of our faithful, and the outlook for the progress of human civilization.'" 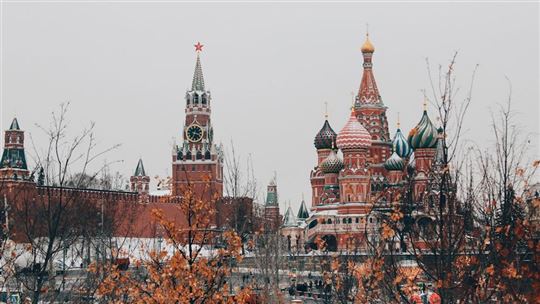 The first to speak, Monsignor Paolo Pezzi, archbishop of the Mother of God in Moscow and President of the Russian Catholic Bishops' Conference, placed the word "wonder" at the center of his speech: "Wonder that accompanied me for several weeks after the meeting, above all because I saw two people looking at each other. When we exchange kind works, when we look at each other in the face, when we speak from ‘heart to heart’, it is something completely different. It is something that arouses wonder because in some way it reminds us of an unexpected, divine presence."

The Orthodox interlocutors emphasized above all the urgency that prompted the meeting, which was also long awaited and postponed several times: the persecution of Christians, which until then "had not been taken into consideration at the international level as a global problem," noted Vladimir Legojda, Chairman of the Synodal Department for Church's Relations with society and Mass Media. "It was not a meeting focused on relations between the Orthodox and Catholic Churches, but on the overall situation of Christians in the world, and in particular of those who suffer because of their belonging to the Christian faith." Faced with a world that seemed to have reached the brink of catastrophe, Legojda added, quoting some words pronounced some time ago by Patriarch Kirill in a small circle, it was necessary to make a new, decisive gesture, that would force public opinion to stop and listen. The historical weight of the meeting in Cuba is gradually coming to light precisely in the method it indicates to us, he concluded; that is, to overcome the differences that we perceive among us in order to talk about the essential, to appeal together to the world and shake it up, proposing a testimony of unity and solidarity.

Fr. Hyacinthe Destivelle, of the Pontifical Council for Promoting Christian Unity, also contributed to the dialogue, pointing out how the meeting in Havana, a real example of "dialogue in charity," aimed at "establishing fraternal relations between our Churches," was in fact also an experience of "dialogue in truth," that is, aimed at affirming unity in faith. "The Pope and the Patriarch made significant gestures from a theological and spiritual point of view," said Fr. Destivelle, who was in Francis' entourage in Cuba in February 2016. "Under the cross they recognized themselves as brothers in faith, bishops, that is, successors of the Apostles; they exchanged precious gifts. Pope Francis gave some relics of St. Cyril as a sign of the communion of saints, and a chalice, a sign of his hope in the restoration of Eucharistic communion; Patriarch Kirill gave him an icon of the Mother of God of Kazan as a sign of the common veneration of the Virgin." These are all gestures pertaining to the dialogue in charity, said Destivelle, which also have an important theological value: "The dialogue in charity is not a simple preparation for the dialogue in truth, it is itself a theological expression, a 'theology in action', capable of opening new ecclesiological perspectives." As Metropolitan Meliton, a great proponent of unity in the 20th century, said: "By loving one another and dialoguing in charity, we make theology, or rather we build theologically". And as St. John Paul II affirms, "the recognition of fraternity […] is something much more than an act of ecumenical courtesy; it constitutes a basic ecclesiological statement” (Ut unum sint, 42).

This dialogue, five years after Cuba, continued with Fr. Stefan Igumnov, of the Moscow Patriarchate Department for External Relations, who pointed out that the meeting in Cuba "proved to be the most natural, the most organic gesture possible between two Christian leaders, and first of all between two Christians. How, in fact, else can we resolve problems if we do not meet, if we do not dialogue?" The point is not to close one's eyes to divisions, to pretend they do not exist, but "to set out together on the path toward unity, toward truth, in an attempt to overcome the obstacles that stand in the way, and right now, without waiting for this path to come to an end, to re-propose together, to all men, the Gospel, the love of Christ." This, which is the task we have always had, becomes all the more urgent in the face of the difficulties of the current situation, in the face of the pandemic," concluded Fr. Stefan. In his words echoed several times the concern for so many Christians who suffer, the desire to bring common relief in countries torn by war and persecution, such as Syria, where Catholics and the Russian Orthodox are actively working on joint educational and medical projects.

Read also - Fr. Giussani and I. Confessions of a headteacher

Finally, the moderator of the meeting, Jean-Francois Thiry, invited Monsignor Pezzi to conclude by summarizing the fruit and the task offered to us by the meeting in Cuba in the word "fraternity". "That event was prophetic. In the Christian world, in fact, every event has a value that is not only momentary, but refers to a future meaning. The Pope and the Patriarch called each other brothers, and it was not simply a kind or strange gesture, but the recognition of a fact. Fraternity carries within it the desire to do something together to witness the Gospel. Of course, we suffer from not yet having full communion, from not being able to communicate at the same Eucharistic table, but along the way we already see something being accomplished, because the fulfilment is already present in prophecy. We may not see the full realization of unity with our own eyes, but this is not the important point. The important thing is that we are here, in Russia, to bear witness to our common belonging to Christ, to bear witness to the Gospel."