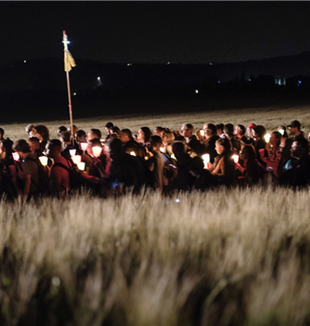 "I’m not made; in fact I’ve never felt so lucid. I suddenly felt a desire for the impossible.” The wonderful dialogue between Albert Camus’ Caligula and Helicon inspired the title of the 42nd Macerata-Loreto Pilgrimage, well before the pandemic broke out. "It is incredible how we now find ourselves with that need for the impossible", says Monsignor Giancarlo Vecerrica, Bishop Emeritus of Fabriano-Matelica. He is eighty years old, irrepressible and the paternal guide of the historic pilgrimage, which will not take place this year, or rather not in its usual form, with the flow of people (100,000 people in recent years) walking twenty-eight kilometres during the night, amidst prayer, songs, silence, testimonies. Instead there will be a vigil, on the evening of June 13 at 9 p.m, in the Sanctuary of Loreto, which will be broadcast on TV2000: a new form, conceived because of the limitations imposed by the health emergency and the thousands of letters received, which have set the organizers back “on the road”. 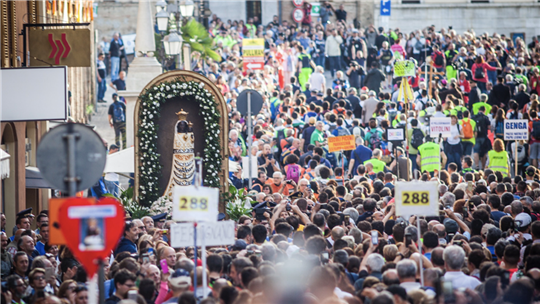 "I suddenly felt a desire for the impossible.” Why did you choose this theme?
The discomforts and difficulties that were apparent even before the pandemic – existential emptiness, I think of many young people…lack of work, agitated politics, violence – everything made us perceive the desire for a better world, of the "civilization of love". I really identify myself with this desire for the “impossible”. Thus, the pilgrimage was meant to be an opportunity to reawaken the desire, to reawaken the heart. It was that famous phrase of Fr. Giussani's that I used to repeat to the students in my religion class: "I wish you never to be calm!” I remember that they immediately felt taken, shaken... They perceived that there was something more than what appeared to be seen. The pilgrimage was meant to be a moment of deeper reflection upon life, which is not only emptiness and discussion.

What does the fact that it is impossible for the pilgrimage to go ahead as usual mean to you?
I immediately got nervous... I am a bit anxious! It then pushed me to reflect upon what was happening: I prayed and I spoke to my friends. And I felt as though I were being led by Our Lady towards this strong thought: from this suffering I can learn not to tire myself out in the conception of life as a pilgrimage. She asks me to be even more a pilgrim. Then you find that you are no longer "impossible", on the contrary, that this impediment does not extinguish desire, it strengthens it. I have often thought about when Fr. Giussani said that one recovers from illness either more good or bad. I ask that the Lord free us, not only for everything to pass, but that He leave us better, with greater awareness, greater wealth.

How did you choose the new form?
It was wonderful, because it flourished among us. First of all, we said to ourselves: let us listen to the pilgrims. This was the heart. We sent a message and we received the most diverse, original, weird proposals. Together with thousands of letters, which continue to arrive; we have sacks full of testimonies, gratitude, pain, regret, difficulties, discovery of humanity, help... It was the avalanche of intentions that we are receiving from all over the world that made us decide to go to Our Lady, to do so with a gesture of prayer that traces the path marked by the Rosary. In recent weeks, the Pope has recommended it to us and for Padre Pio it was the most powerful weapon against all evil in humanity.

How will it take place?
The usual central gestures of the night will still take place: Eucharistic blessing, adoration of the Cross, testimonies... Everything in an hour and a half. On the Wednesday beforehand, we used to go to St. Peter's Square to light the torch, which was then carried to Macerata. This year, the Bishop of Macerata will light it in the afternoon in the Basilica of Mercy where the pilgrimage began in 1978. Then, two young people on a motorbike will take it to Loreto. And we will enter through the Holy Door, because this year is the Lauretano Jubilee, the centenary of the choice of Our Lady of Loreto as patron saint of the Air Force. Everything will end within the walls of the Holy House, with the Glorious Mysteries and the renewal of baptismal promises. There, we will present all our intentions to Mary... Two students will do it, because the pilgrimage was born as thanksgiving for the school year.

Read also - Enzo Piccinini: Nulla Osta received to initiate the cause of beatification

Why is it important to do such a gesture today?
You know, they always make fun of me because every year during the walk I say: "Here comes dawn!", and it is still night... But I point to that house, the House of Nazareth, where the dawn has risen, where we are announced and we announce to everyone that, in the darkness, dawn has come.