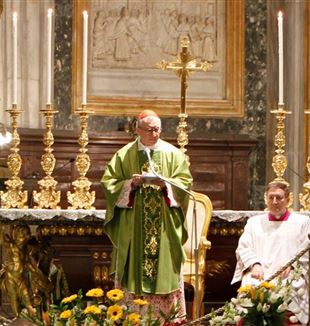 I am pleased to be able to celebrate the Eucharist of thanksgiving with you this evening - eucharistein - for the gift of life and the priestly ministry of the Servant of God Monsignor Luigi Giussani, on the 15th anniversary of his return to the House of the Father and on the occasion of the 38th anniversary of the pontifical recognition of the Fraternity of Communion and Liberation, the mature fruit, together with Memores Domini, of his pastoral zeal.

"Be holy, for I, the Lord your God, am holy" (Lv 19:2). With these words from Leviticus, today's liturgy places us before the meaning of life, which is called to reach out towards the Lord and to fulfil itself in the definitive encounter with Him. Holiness is the goal of every Christian vocation, as Saint Augustine recalled: "You have made us for yourself, O Lord, and our heart is restless until it rests in you".

“Don Gius”, as he was affectionately called, had a restless heart, continually striving for beauty and truth. A restless heart, begging for the love of the Lord Jesus, but always sustained by the certainty that it was Christ who, first and foremost, begged for his heart: “The real protagonist of history is the beggar: Christ who begs for man’s heart, and man’s heart that begs for Christ”.

The true and evident novelty of Christianity for Fr. Giussani is that the very mystery of God comes to meet us, becomes flesh and, therefore, becomes a recognisable and encounterable reality. The personal encounter with Christ has been the center of his whole life, from his childhood in his family and during the years he spent in the seminary, to the birth and expansion of Communion and Liberation.

From a young age, Fr. Giussani sensed that the world was gradually de-Christianizing, becoming indifferent and ignorant towards faith, more than hostile towards it. He understood that Christianity no longer affected people's lives, but was merely a tradition that was still alive, reduced to its doctrinal and moral aspects. For Fr. Giussani, instead, it is an event that springs from the presence of Christ in history, it is "the announcement of an event that happened, that surprises people in the same way the angel’s announcement in Bethlehem surprised the poor shepherd two thousand years ago". And it is precisely the perception of this event that awakens or strengthens the religious sense. It was necessary, therefore, to bring the vitality of Christianity back into daily life. It was this perception that prompted him to ask his Archbishop, Blessed Alfredo Ildefonso Schuster, if he could move from teaching in the seminary to teaching in high school.

From when he began teaching at the Berchet High School in Milan, he “committed himself to awaken in youth the love for Christ, ‘Way, Truth and Life’, repeating that only He is the way towards the fulfilment of the deepest desires of the human heart, and that Christ does not save us regardless of our humanity, but through it”, as Benedict XVI reminded you in the audience he granted to the movement in 2007.

Fr. Giussani's life was always, as the collect we prayed at the beginning of Mass recites, attentive to the voice of the Spirit to know what is in conformity with the will of God and to implement it in words and deeds. Docile to what God incited in him, Fr. Giussani had the undoubted gift of knowing how to awaken the truest and deepest questions that dwell in the heart of every human being, aware as he was that if the question exists it is because the answer exists: it is only waiting to be known, to be encountered. He was able to find the common ground through which to engage with the humanity of the other: it did not matter whether they were a believer or an atheist, a Jew or a Buddhist. He was aware that the Lord Jesus incites in man a profound attraction before which he cannot remain indifferent. 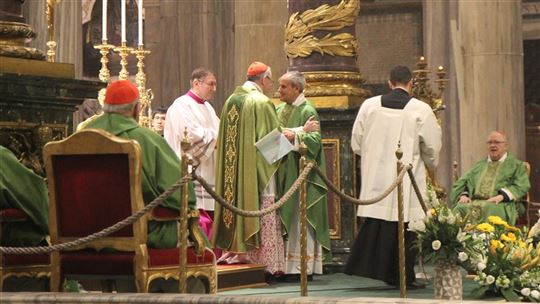 The mystery of human freedom is thus solicited and reinvigorated, placed between the two poles of either allowing yourself to be overcome by God’s love, or rejecting it. Holiness, to which the liturgy calls us today, is precisely our affirmative response to the disruptive newness of God that precedes us and reaches us, changing our lives. "Be holy, for I, the Lord your God, am holy". The whole of Fr. Giussani's life has been a continuous search of the "yes" that he pronounced on the day of his priestly ordination. Giving his life, he "found life not only for himself, but for many others", because it led "not to himself, but to Christ", as remembered by the then Cardinal Ratzinger during Fr. Giussani’s funeral Mass in Milan Cathedral.

The movement of Communion and Liberation, God’s gift to the Church, was born from Fr. Giussani’s free and conscious adherence to the Lord, of which he is a living and integral part. On the other hand, every authentic gift of God, every charism, is necessarily universal, that is, it is for the whole Church. In the wake of Fr. Giussani, Communion and Liberation is called to continue to offer its ecclesial contribution by showing - today perhaps even more than in the past - the reasonableness of faith and its relevance to daily life, as well as the urgency of witnessing the Lord Jesus in every area in which you find yourself living and working.

Fr. Giussani’s spiritual faithfulness cannot be reduced, as Pope Francis told you some time ago, "to a museum of memories, of decisions taken, of rules of conduct". It is called to renew itself today through the personal "yes" of each one of you to the Lord, bearing in mind the warning that Saint Paul addresses to us in the second reading: " Let no man glory in men.”

Every time one loses sight of the heart of the Christian event, struggles and disputes easily arise. What has been given to us can become an object of claim and domination. And so we find ourselves divided: those who belong to Cephas, those who belong to Paul, those who belong to Apollos. Instead, Fr. Giussani taught that only by remaining attached to the Lord and the Church are you truly fruitful because "all things are yours, whether Paul or Apollos or Cephas or the world or life or death or the present or the future – all are yours, and you are of Christ, and Christ is of God” (1 Cor 3:23).

At the end of a long illness, Fr. Giussani concluded his earthly pilgrimage to the definitive encounter with the Lord Jesus on 22 February, 2005, the feast of the Chair of Saint Peter. There was a particular human affinity between the Apostle Peter and Fr. Giussani. Fr. Giussani saw all the effectiveness of the pedagogy of Christ reflected in Peter’s life. In the impetuousness, in the generous ideal impulse, as well as in the fragility of Peter, one can say that Giussani saw the emblem of the redeemed creature. In him we can see the power of the encounter with Christ - "Come and see" (Jn 1:39) -, the drama of sin - "You will deny me three times" (Mk 26:75) - and the power of divine mercy - "Do you love me more than these? (John 21:15).

"The will to respond and to change”, Pope Francis told you, “which can give rise to a different life, comes thanks to this merciful embrace. Christian morality is not a titanic, voluntary effort, of one who decides to be coherent and who manages to do so, a sort of isolated challenge before the world, [but] the heartfelt response before the surprising, unforseeable- even ‘unfair’ according to human criteria- mercy of One who knows me, knows my betrayals and loves me just the same, appreciates me, embraces me, calls me anew, hopes in me, has expectations of me. Christian morality is not a never falling down, but an always getting up, thanks to his hand which catches us”.

Providence perhaps chose this very day to call Fr. Giussani to Him, in order to remind each of us of the deep bond that bound him to Peter and his Successors, whom he always loved and served with filial devotion, teaching the members of Communion and Liberation to do the same. Fr. Giussani knew that in Peter – and, therefore, in the Pope – was the rock on which the Lord has chosen to build the Church his people, an objective and effective sign of His divine presence in the world through the centuries.

In renewing to the Lord our praise for the gift of Monsignor Giussani, we want to entrust ourselves to Mary, Mother of the Church and our Mother, in this Basilica dedicated to her. May she, who with her "yes" opened the doors of eternal salvation to us, sustain us in the frailties and weaknesses of daily life and help us to renew with confidence our personal "yes" to the Lord, in order for the fragrance of her Son, Jesus Christ, to be spread throughout the world (cf. 2 Cor 2:15). #FrGiussani