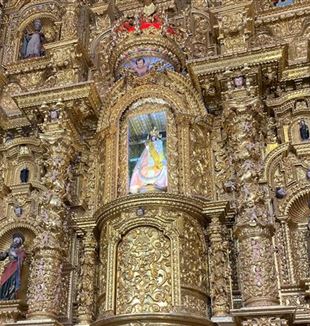 When we received Davide Prosperi's letter of invitation to the Audience, for some of us it was a shock, almost a correction. We realized that we were truly facing a unique and exceptional occasion, even if it would take place 10 thousand kilometers away, to which each of us was personally invited.

Thinking about how we could feel united with the whole movement and how to look forward to that day "with a humble and sincere heart," on Sunday, October 9, we gathered from various cities around Ecuador to go on pilgrimage to the Shrine of Nobol (Guayaquil). The body of St. Narcisa del Jesus is there, one of this country’s three saints and the last to be canonized. It is a simple and humble place, where thousands of people go every day to ask and pray, each for their own dramas. On the altar there is a reproduction of Peter's Square in memory of the day Narcisa was proclaimed Blessed. There were thousands of people there for Mass and we were a small flock. Everyone carried within what they wanted to offer her, and their questions and supplication on their faces. We only took our poor lives. Looking around and raising my eyes to that picture of the Square, I thought, moved, "We are all here because of a need and we are asking for something, but who is here asking like us for an entire people?" I perceived a great task: in addition to asking for one's own dramas, I was also aware of belonging to a history that had reached many corners of the earth, whose centre is that Square. From that day on, every day, I waited for the Audience by offering my day, rereading Davide's letter, by praying.

Read also - "That 'more' that the Pope asks of us"

We had proposed to everyone to follow the Audience on October 15 live so as not to miss anything of that "here and now" that we have always been taught. About twenty of us connected at 3 a.m local time via Zoom, each from our own homes, given the danger of going out at that hour. Three twenty year-olds had gathered the evening before to be together and sing with the whole Square, "with the excitement of being together with the other 60,000 people," as one of them put it. The gift of the Audience powerfully put the beauty of this story before each of us, and the certainty that we were on the right path. The next day we went to mass as a group in three shrines close to where we live in order to say thank you to Fr. Giussani and to the Pope whom we have never felt closer to, even 10 thousand kilometers away.